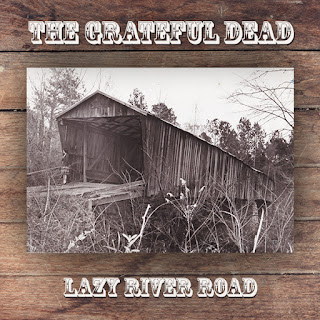 
Happy Halloween!  In honor of this most frightening night, I offer you probably one of the most gruesome Dead albums!  This is a reconstruction of what could have been The Grateful Dead’s “final” studio album, which would have been released in 1995 if Jerry Garcia had not passed away.  This collection, which I call Lazy River Road, collects the most pristine soundboard tapes of the best performances of the songs that would have been featured on their final studio album.  All songs have been EQd and volume adjusted to function as a cohesive whole, a final live double album.


After the release of 1989’s Built To Last and the document of their 1990 tour Without a Net, The Grateful Dead entered in the final era of the band, a time saturated in health problems and the accumulation of a lifetime of drug addiction.  Longtime keyboard player Brent Mydland died of an accidental drug overdose in July 1990 and was replaced by former The Tubes and Todd Rundgren keyboard Vince Welnick that September.  Furthermore, Jerry Garcia’s declining health and sudden relapse into heroin worried the band, who attempted an intervention in 1991.  Promising to shape up, the band planned more tours in 1992, as well as woodshedding new material for an eventual studio follow-up to Built To Last.

All of the key members contributed songs for the new project, most of them co-written with long-time lyricist Robert Hunter.  Jerry Garcia offered the folky “Lazy River Road”, the mid-tempo ballad of “So Many Roads”, the jaunty pop of “Liberty” (which had already appeared on Hunter's 1989 solo album Liberty) and the expansive ballad “Days Between”.  Bobby Weir offered the funky “Corrina”, the new wavey “Easy Answers” and jazzy “Eternity” cowritten by Willie Dixon.  Phil Lesh offered the downbeat “If The Shoe Fits” and ballads “Childhood’s End” and “Wave To The Wind”.  Vince Welnick offered the exotic “Samba in the Rain” and the bluesy “Way To Go Home”.  Most of the songs had a theme of traveling home, and much of Hunter’s lyrics seem to reference previous milestones of the band, as if this group of songs were wrapping up a 30-year career.  Whether intentionally or not, that is exactly what happened.


In February 1993, the band recorded in-studio rehearsals of the new material, some of which would eventually find its way onto the 1999 live anthology box set So Many Roads.  After performing the batch of twelve songs regularly over 1993 and 1994, the band entered the West Marin recording studio The Site for about twelve days in November 1994.  Placed atop a huge hill in the secluded country, the studio seemed to be the perfect place to escape the wearies of the road and narcotics of the street and to concentrate on recording the new album.  Unfortunately, this was not the case.  Although the band recorded backing tracks for all twelve songs, bandleader Garcia was too strung out on heroin to participate in any meaningful way.  Also, due to The Dead’s insistence of tracking as a live band, they did not seem to nail many solid takes, being left with recordings inferior to the previous year’s rehearsals!


After taking a break to hit the road again, The Dead returned to The Site for about ten days in May 1995 to try to finish the album.  As before, the burned-out Garcia barely contributed, leaving only a few scratch guitar tracks and nearly none of his vocals.   Surely the drugs talking, Jerry procrastinated and postponed his contributions, which the band allowed.  Unfortunately, Garcia would die three months later of a heart attack.  Later that year, Weir would revisit The Site recordings only to find them completely unusable.


Although the album died with Garcia, a number of the songs went on to be resurrected in various forms.  Bob Weir recorded “Easy Answers” on the Bob Wasserman 1994 album Trios.  Welnick recorded “Samba in the Rain” for his Missing Man Formation album in 1998.  Weir recorded “Corrina” in 2000 for his Evening Moods album.  But after performing most of the twelve songs nearly 100 times over three years, The Grateful Dead themselves had left an abundance of recordings, many in soundboard form via taper Charlie Miller.  Many fans were able to reconstruct their own “final” Grateful Dead album, often shared among fans; some of these include a compilation called Earthquake Country and another called Days Between (The Final Album That Never Was).   But what does the official Dead camp have to say?  Since this was a divisive era for the band, posthumous releases have barely covered these twelve compositions, although there are a few exceptions: two live performances from 1993 appeared on Road Trips Volume 2 Number 4; six of the rehearsal and live recordings appeared on the official So Many Roads box set; and another eight appeared on the 30 Trips Around The Sun.  Finally, the 2019 release of Ready or Not covers this era, although fans don’t feel it contains definitive versions (as well as a simply hideous album cover).  It also lacks all three of Lesh's songs, at his request, for feeling incomplete and unrefined.  Is there a way to reconstruct what the final Dead album could have been?


I will be the first to admit: I am not a hug Deadhead.  But this was a blog-follower request and seemed to be an intriguing challenge.  Surely, this was a rough time for The Grateful Dead, with a sloppy or unintelligible Garcia and a cringey Welnick.  Because of this, it is very difficult to find a singular, definitive version of these songs--the "perfect, flawless performance".  Regardless, I plowed through dozens of performances of all twelve songs, searching for a singular, best version of each one, using Deadhead-voted favorites on headyversions.com as a guide.  Since I was not a diehard Deadhead, I admittedly might have missed some nuance in my selection.  But on the otherhand, my detachment from the culture and the band's historical expectations allowed me to judge these recording in a more non-bias way--something extremely useful for this set of songs, often dismissed by Deadheads simply out of hand!


Each track was narrowed down to about three or four contenders for “definitive version”, using recordings that had the clearest sound in their Miller soundboard form, further mastering them all to be a cohesive whole.  After a painstaking  final selection, all songs were crossfaded into two discs to make it seem like one continuous performance on a double compact disc.  Track order was constructed so a particular band member would not have two of their own songs in a row.  In the end I particularly focused on the October 1994 shows as, in theory, these versions would have sounded the closest to what the studio versions could have sounded like since The Dead would enter The Site the following month.

Disc 1 of Lazy River Road opens with what I felt was the strongest (and most pop-friendly) track, “Liberty”, taken from Atlanta 3/30/94 (voted the best on headyversions).  Next is Lesh’s mediocre-yet-palpable blues rocker “If The Shoe Fits”, which is an edit of the verses from Boston 10/2/94 and the choruses from New York 10/19/94 to make a definitive version.  Next is one of the highlights of the album, the New York 10/14/94 “Corrina” that morphs into a fantastic jam, reminiscent of classic Grateful Dead (also voted the second best “Corrina” on headyversions).   Another highlight is “Lazy River Road”, taken from the same show, followed by the embarrassing "Samba in the Rain", again from 10/14/94, including for posterity. Disc 1 closes with the whimsy of "Childhood's End" from Boston 10/3/94.

Disc 2 opens with one of the later, new-wavey versions of “Easy Answers” from Philadelphia 3/19/95, which I preferred.  Garcia’s “So Many Roads” from Boston 10/1/94 is next, voted second-best on headyversions and, in my opinion, is far superior to the “final show” performance on 7/9/95.  Next is the rather boring "Wave to the Wind", this being the least terrible version of the later 1993 performances, from Auburn Hills 6/9/93. The droning “Eternity” emerges late in the game, from Mountain View 9/17/94.  Next is the highest point of the band in this era, Garcia & Hunter’s final masterpiece “Days Between”.  This was a tough call, but I eventually used the second-highest voted on headyversions, from Los Angeles 12/19/94.  The album concludes appropriately with Welnick’s “Way To Go Home” as more of an afterthought, taken from New York 10/19/94.

In about one month, Ready or Not will be released, containing the Dead Camp's final take on this era.  Interestingly, aside  from "Corrina", I am using all different versions, ones I feel are superior.  Furthermore, I am including Lesh's three songs, which, really aren't all that terrible.  Since I personally feel my compilation far surpasses Ready or Not, I offer this as an alternative to an era that never got it's fair shake... even now.