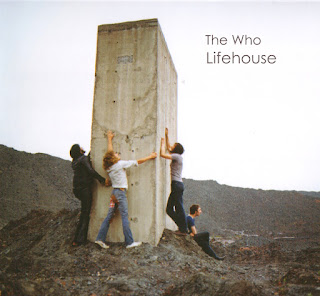 Few instances of editing were needed beyond tighter crossfades to eliminate lead time between tracks and to create four continuous sides of music.  One of two exceptions includes my own unique edit of “Teenage Wasteland”.  While clearly the song eventually became and was replaced by “Baba O’Riley”, Townshend chose to include both versions on his final Lifehouse Chronicles.  I have decided to respect that artistic decision, but have edited out the final 3 minutes of the song, the sections that emulate what would later become “Baba O’Riley”, thus avoiding any musical and lyrical redundancies.  I have also included the beginning of “Baba M1”, one of Townshend’s synthesizer experiments that was later incorporated into “Baba O’Riley”, as a brief introduction to the album and representing the Universal Chord itself.   The second unique edit was the creation of a new “Love Ain’t For Keeping”, consisting of the classic Who’s Next acoustic version edited together with the 2-minute jam and coda from the electric version recorded at the scrapped New York sessions (found on Odds and Sods).  The effect is a an amazing end to Side A and a fresh look at a familiar song.
Posted by soniclovenoize at 2:27 PM

Email ThisBlogThis!Share to TwitterShare to FacebookShare to Pinterest
Labels: 1971, lifehouse, rock, soniclovenoize, who