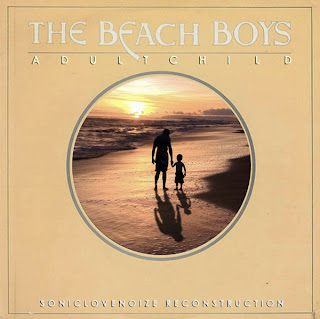 This was a follower-request reconstruction for some time, so I thought I’d finally buckle down and do it for you guys!  This is a reconstruction of the unreleased Beach Boys 1977 album Adult/Child.  Initially recorded as a solo project by Brian Wilson, almost all of it was scrapped and the MIU Album was released instead in 1978.  Here, the tracks which were officially released have been compiled from their best sources, and the tracks not officially released have all been personally remixed to match as closely as possible the fidelity of the officially released ones.  All tracks have been volume adjusted correctly and appropriate banding time has been either added or taken away, depending on the song.

Following a rush of confidence after completing Love You nearly by himself, Brian Wilson continued work on a follow-up entitled Adult/Child, another set of songs unabashedly autobiographical about his state of mind (and physical health) at the time in 1976-1977.  The title was allegedly culled from Brian’s psychologist Eugene Landry, in which we can only presume that the “Adult/Child” is Brian Wilson himself.   Many of the arrangements emulated the 1976 album 15 Big Ones, which had a decidedly Sinatra-esque ‘big band’ sound.  As well as the new compositions, Brian also dusted off a few outtakes from earlier in the decade, including “HELP is On The Way” (which was promised but ultimately forsaken on Landlocked, a reconstruction I just recently tackled) and “Games Two Can Play”.  Unfortunately the album was canned by Reprise Records as not being commercially viable, although the long-running rumor was that half of the Beach Boys camp conveniently disliked the big band sound of Adult/Child anyways.  The album was essentially replaced by the MIU Album, headed up by Mike Love, and the sole Adult/Child survivor was “Hey Little Tomboy”, which featured a new set of overdubs.

My reconstruction is rather straight forward as, while the songs on Adult/Child aren’t necessarily A+ material in quality, it is an extremely well-sequenced album as a whole and we are lucky to know what Brian’s intended track sequence was to be.  The biggest problem was within the realm of volume adjustments, as each song implied a different dynamic range.  Even worse, each song seemed to already have their own unique volume as they all came from vividly different sources.   Once we set certain album-peaks which featured the loudest points in the album (“Shortenin’ Bread” for instance) this could be fixed.  The second challenge was in remixing roughly half of the album since seven of the tracks were never officially released and exist only on bootlegs.  I found that the commonly bootlegged version—from a sometimes droppy cassette—seemed to lack bottom end and some highs but the mids were intact (unlike the Landlocked tapes).  When reEQ’d, they seem to fit wonderfully alongside the officially-released tracks.

One note must be made that no speed corrections were made to my Adult/Child reconstruction.  The reason for this is that we do not have a reference point for some of the tracks, and they seemed to sound fine by my ears (aside from the fact that I am not too fond of digital speed correction)!  It also becomes tricky knowing Brian tinkered with tape speeds as a tool in the recording studio; was a slowed tape intentional or not?  Also, cassette dropouts were not fixed, as I did not feel they detracted from the listening experience and, if I may be so bold, adds an analog aura that seems to be lacking in today’s modern music production.  There is nothing like tape errors to remind a listener that we are all human and perfection shouldn't necessarily by our ultimate goal.

Side A begins with my own reEQd version of “Life Is For The Living”.  In contrast to other reconstructions of Adult/Child, I did not sample an earlier part of the track to replace this tape error as I felt it desecrated the intentional a capella introduction, and is left as is.  Next is followed by the atrocious “Hey Little Tomboy” which is taken from the MIU Album.  While many prefer the unreleased early mix found on the Adult/Child bootlegs, I felt a more completed mix belonged here; also, the spoken word bridge section made my ears bleed in embarrassment.  This is followed by “HELP Is On The Way”, the exact same version as found on my Landlocked reconstruction, an edit of the officially released mix from the Good Vibrations boxset.  The brand new (and allegedly speed-corrected) “It’s Over Now” from the Made In California boxset follows, along with my own remix of “Everybody Wants To Live” to close the first side of the album.

Side B begins with a perplexing track that Brian was allegedly obsessed with at the time, “Shortenin Bread”.  This is a remixed version of the bootleg, not the version found on the LA Album.  “Lines” and “On Broadway” follow, both remixed from a bootleg for improved soundquality.  Next we have a not-too-shabby “Games Two Can Play” taken from the Good Vibrations boxset, as well as a decent uptempo rocker “It’s Trying To Say”, personally remixed from a bootleg.  The album closes with “Still I Dream of It”, taken from the Good Vibrations boxset.

My final touch was new, original cover art.  I had noticed that there really isn’t any logical bootleg cover art for Adult/Child, so I deemed this a top priority to rectify for my reconstruction.  Using the MIU Album cover as a base—since this reconstruction essentially replaces the MIU Album anyways—we have a cover more suitable than a random 1950’s postcard illustration or a SMiLE-era ‘firehat’ picture of Brian Wilson.  Although I recognize that Adult/Child probably references a psychological state, I chose to go with a literal direction with the artwork, using a silhouette of an adult and a child hand-in-hand; who is to say that the title doesn’t have a double-meaning?  If anything, this cover represents the superficial meaning of the album with Landy’s prognosis relegated more sympathetically to a subtext.  With all the honesty already present in the lyrics, maybe we are doing Brian a favor and cutting him a little slack. Didn't he deserve it by 1977?

Posted by soniclovenoize at 8:22 PM