The Doors - Celebration of the Lizard 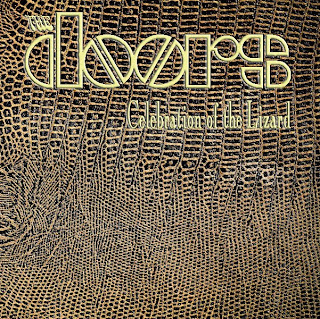 The Doors – Celebration of the Lizard

Side B:
7.  Spanish Caravan
8.  Wintertime Love
9.  Celebration of the Lizard

Merry Christmas and Happy Holidays!  This was a much-requested reconstruction that was surprisingly easy to do, so I thought I’d revisit and bastardize my favorite Doors album as present to my blog followers!  This is a reconstruction of the unreleased Doors album Celebration of the Lizard, which was restructured into 1968’s Waiting For The Sun.  The bulk of my reconstruction uses a superior needledrop vinyl rip of the album for the best possible fidelity, and the title track is reconstructed from three different sources to make a complete and dynamic performance piece as it would have sounded like in 1968, superior to the officially released “work in progress” track.

Upon entering the recording studio in 1968 to make their third album, The Doors hit a creative wall for several reasons.  First and foremost, they had simply run out of material, having blown through their backlog of quality songs with their first two albums in the previous year.  Paraphrasing Robbie Krieger, the ‘Third Album Syndrome’ had affected The Doors, who were thrown into the position of needing a new album to promote with no songs immediately on hand, forced to compose new material in the studio.  A solution was to base their third album around a lengthy poetry piece of Jim Morrison’s, entitled “Celebration of the Lizard”.  Originally claimed to occupy an entire side of the LP, “Celebration of the Lizard” would have included seven sections, some of which were experiments in noise to accompany Morrison’s abstract poetics.  Unfortunately, the piece was too abstract for producer Paul Rothchild, who felt the band absolutely needed a hit single, and the band themselves allegedly could not properly record the song to their liking in the studio.

Rothchild presumably convinced the band to abandon “Celebration of the Lizard” midway through the recording sessions for the album, which signaled a change in Jim Morrison himself to a state of drunken ambivalence.  After his epic poetic masterpiece was killed in favor of a hit single, he simply stopped caring about the album and turned instead to alcohol and his own circle of followers who vied Morrison’s time away from the actual members of The Doors.  The only thing salvaged from the formerly-title track was its fifth section, “Not To Touch The Earth”, which became its own track on the album, which was retitled to Waiting For The Sun.   The legend has it that the void left by “Celebration of the Lizard” was filled with two songs chosen by the 10-year-old son of Elektra Records head Jac Holzman.  Unused filler from The Doors’ original 1965 demo, “Hello, I Love You” and “Summer’s Almost Gone” were rearranged specifically to be a hit single and it’s b-side.  It worked; the album Celebration of the Lizard transformed into Waiting For The Sun, the band’s highest charting album.  But it was not the album that Jim Morrison had originally wanted it to be.  Can it now?

The first step in recreating Celebration of the Lizard is to know what would or would not have been on the album.  Obviously, “Celebration of the Lizard” would have been the title track, allegedly taking up the entire second side.  Although a studio run-through of the track reached 17 minutes in length and media outlets at the time claiming some recordings incredulously amounted to 36 minutes, almost all of the performed live versions of the entire track ran between 13-15 minutes.  I propose that “Celebration of the Lizard” would have not exceeded 14 minutes in length, and would have been teamed with another song or two on side B, which is how it is presented here.  Also, we know that “The Unknown Soldier” and it’s b-side “We Could Be So Good Together” would have been on Celebration of the Lizard, since it was a single release from early in the sessions; while some speculate the b-side might not have been included on the album, that is not a precedent set by the previous two albums, where not a song was wasted!  Studio documentation also shows that “Spanish Caravan” and “Wintertime Love” were all recorded before “Celebration of the Lizard” was scrapped, and were probably good contenders for the album.  News articles at the time also place a cover of “Gloria” as a contender for the album, although we must exclude this because we simply don’t have a 1968 studio recording of “Gloria” to use on our reconstruction (not to mention the band simply stopped performing the song altogether the previous year).  There is also speculation that Morrison’s spoken poetry might have acted as segues between the actual musical tracks on the album; we must also set this notion aside, since we simply do not have any spoken word recordings from the CotL/WftS Sessions to use in this reconstruction (although this is certainly plausible for the following album, 1969's The Soft Parade; maybe the poetry rumors were assigned to the wrong album?).   Aside from these six songs, that’s all we know for sure.  In contrast, we are certain of what would not be on the album: “Hello, I Love You” and “Summer’s Almost Gone”, which were the title track’s replacement.

Because of a) the limitations of source material and b) the unsurety of how the album would have sounded like aside from six songs, we are left with a great leeway to reconstruct our Celebration of the Lizard.  Here, I am essentially beginning with all of the Waiting For The Sun album, dropping the two 1965 demo-originated tracks and adding a rebuilt title track with “Not To Touch The Earth” reinstated.  That leaves us with a nine-song 37-minute album, enough to compete with the rest of The Doors’ works.  I am also going to exclude the actual song “Waiting For The Sun”, as no 1968 recording is available that lacks the 1970 Morrison Hotel-era overdubs.  It is of note that I am using the pbthal vinyl rip of the album, which is the best version of Waiting For The Sun I’ve heard by far.

Side A of my Celebration of the Lizard reconstruction begins with the ruckus of “Five To One”, taking the place of The Door’s usual ruckus-opener tracks.  Morrison’s introductory lyrics to the track make the song the only real contender for album opener.  It is gently crossfaded into “Love Street”.  While we can’t be certain it would have actually appeared on Celebration of the Lizard, it is needed to release the tension from the previous track.  Following is “We Could Be So Good Together” and then the brilliantly-composed ballad “Yes, The River Knows”.  Again, while we are unsure if the later song had actually been a contender for the album, its inclusion here gives Celebration of the Lizard a pretty large dynamic and stylistic breath, a quality I appreciated the most about Waiting For The Sun.  The stylistic breath widens again with the tribal “My Wild Love” (which thematically certainly fits Celebration of the Lizard) and the side closes much like its officially-released counterpart, with “The Unknown Soldier”.  Side B similarly opens with the amazingly mysterious “Spanish Caravan”, followed by the baroque-rocker “Wintertime Love”.  The album concludes with the title track.

Clearly, The Doors were not able to capture “Celebration of the Lizard” in the studio as they had intended it; this is demonstrated by the only known studio version, an extremely lazy and lackluster rehearsal, appropriately subtitled “An experiment/work in progress”.  This seems curious, as the entire piece was performed a number of times live to sheer perfection.  Why not use direct soundboard recordings of actual live performances if they could only perform it correctly live?  Contemporaries such as The Grateful Dead, Neil Young and Frank Zappa & The Mothers of Invention had mixed studio with live recordings on albums proper and would continue to do so throughout the 1970s.  This is the approach we will take on my reconstruction of the title song: we must find other, stronger performances of the seven individual sections of “Celebration of the Lizard”, while staying within the timeframe of the CotL/WftS sessions, and assemble them into the best track possible.  Although Rothchild has claimed the track had no cohesion, it seemed the obvious choice to push the envelope in that very direction and record each segment separately, piecing the song together.  Admittedly, that was probably not The Doors’ ethos, even though Rothchild allegedly forced them to perform hundreds of takes of “The Unknown Soldier” in search for the perfect take for a hit single.  Here, we have the luxury to undertake what Rothchild could not—or would not—do.

My own edit of “Celebration of the Lizard” begins with ‘Lions in the Street’, taken from the studio rehearsal version.  It is edited into a live version of ‘Wake Up!’ taken from The Doors 1968 Hollywood Bowl performance.  Since The Doors refined “Celebration of the Lizard” over time, we wish to exclude any anachronistic later-era live recordings of the song.  Thus a performance from 1968—the same week as the release of Waiting For The Sun itself—is close enough to the album’s sessions to let us know how the refined pieces would have sounded like in 1968, as opposed to 1970.  This crossfades into more Hollywood Bowl recordings of ‘A Little Game’ and ‘Hill Dwellers’; the slight audience noise is excusable since the overall fidelity of the recordings are a great match to the studio recordings.   Following is the album version of ‘Not To Touch The Earth’, segueing into the studio rehearsal versions of ‘Names of The Kingdom’ and ‘The Palace of Exile’.  The result is an album hopefully more in-tune with Jim Morrison’s intentions before Rothchild’s desire for a hit single destroyed it.  And at the centerpiece, a strong, nearly-fourteen minute title track that is a sum of the more passionate performances of its seven pieces, constructed into a cohesive whole.  So are you ready?  The ceremony is about to begin…