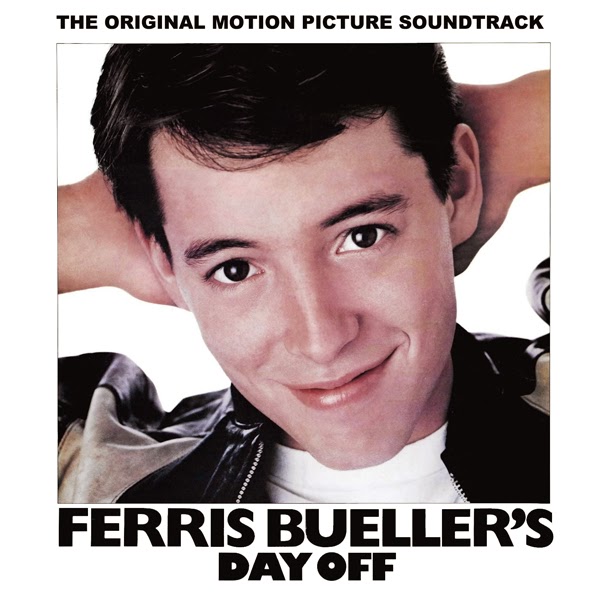 In honor of April Fool’s Day—and of course Spring Break—this is a reconstruction of the unreleased soundtrack to the classic 1986 John Hughes film Ferris Bueller’s Day Off.  Even though much of the film’s music and songs have since become staples of pop culture, an actual soundtrack album was never released because Hughes thought the material was too stylistically diverse and wouldn’t function as a continuous album.  In effect, much of this material remained as rare vinyl-only b-sides and, in some cases, extremely out-of-print and nearly impossible to find.  This reconstruction attempts to collect the best versions of the relevant selections from eleven different sources and present the cohesive album that Hughes did not believe could be made.

A top-grossing film at the time of its release that has grown to such celebratory heights as being selected for inclusion into the National Film Registry for being “culturally, historically, or aesthetically significant,” Ferris Bueller’s Day Off is the story of three teenagers search for freedom in our modern world, something that every young Baby Buster and old Generation X-er seemed to relate to.  Following the antics of clever teen Ferris Bueller’s attempts to skip school with his friends Cameron and Sloane and jaunt around Chicago, the film also featured a classic soundtrack that bounced from then-contemporary New Wave to the classics to other cinematic comedic nods.  But what set Ferris Bueller apart from other 80s John Hughes films such as Sixteen Candles or Pretty in Pink was the lack of an official soundtrack album, despite having noteworthy and culturally relevant music featured in the film.  Quoted as feeling that he wouldn’t think “anyone would like it”, Hughes ditched the notion of actually releasing a soundtrack and instead released a hand-made limited edition 7” single of “Beat City” b/w “I’m Afraid” to the John Hughes mailing list.  That 7” is now long-forgotten and hard to locate, with copies sporadically appearing on eBay, selling for upwards of $200; this dire situation is worsened by the fact that this is the only release one could find those two specific songs!

Although the Ferris Bueller soundtrack has been reconstructed by other blogs throughout the years, my version is a bit different as it does not attempt to be all-inclusive and exhaustively comprehensive, what I perceive as a pitfall of those other versions.  My reconstruction will be limited to an album-length soundtrack, comparable to other John Hughes soundtracks—what would have most likely been released in 1986.  In effect, I will not be including incidental music (notably the score by Ira Newborn) and other media themes used as comedic effect (The Star Wars Theme, the theme from I Dream of Jeanie); we will only include the music most likely to have been released on a 1986 soundtrack album. The songs are sequenced in the order they appear in the film and it is also available in a lossless option, something not previously found on other blogs -- especially for the Fan Club 7" tracks.

My reconstruction beings with the Extended Mix of “Love Missile F1-11” by Sigue Sigue Sputnik, which is featured as the music bed for the opening scenes in which Ferris lectures the viewer about skipping school.  This is a rare mix not found on any album, taken from the A-side of the Love Missile 12” single.  Next is probably the most well known track from the soundtrack, “Oh Yeah” by Yello which has become synonymous with greed and lust.  Featured throughout the film—but most notably when Cameron shows Ferris his father’s Ferrari, it is taken from the first pressing of their album Stella.  Next is one of the rarest tracks, “Beat City” by The Flower Pot Men, occurring during the scene as the trio drive to Chicago.  This recording is the actual film version taken from a lossless rip of the rare John Hughes fan club 7”, not the live recording found on The Janice Long Session EP.  Big Audio Dynamite’s “B.A.D.” follows, heard during the garage scene, taken from an original pre-emphasized copy of their debut album.  An instrumental version of The Dream Academy’s cover of The Smiths’ “Please Please Please Let Me Get What I Want” is taken from the compilation album Boutique Chill, the only CD release of the track in existence; the song was famously used during the trio’s visit to the Art Institute of Chicago.

Next is “Danke Shoen” by Wayne Newton, taken from the Capitol Collector’s Series CD; although the song is a reoccurring motif throughout the film, this recording is featured during the parade scene, “sung” by Ferris on a float.  The second number to be “sung” is “Twist and Shout” by The Beatles, this recording taken from their current 2009 remaster series (still the best master in my opinion!).  Notably, John Hughes overdubbed a horn section onto the track for the film to fit the setting, much to the displeasure of Paul McCartney; Hughes then kept the mix in the can after discovering he offended a Beatle!  Driving home from Chicago we hear Zapp’s “Radio People”, taken from their album The New Zapp IV U.  Probably the rarest of all recordings included is Blue Room’s “I’m Afraid”, heard during the poolside scene.  This is taken from a lossless rip of the John Hughes fan club 7” and is an alternate mix as compared to the circulating version, featuring a longer ending.  Another poolside track, “Taking The Day Off” by General Public is taken from the Classic Masters compilation.  As Sloane and Ferris have a parting heart-to-heart, The Dream Academy’s “The Edge of Forever” is featured, taken from an original pressing of their debut album.  My reconstruction concludes with the music bed featured as Ferris races to beat his parents home, The English Beat’s “March of the Swivel Heads”, itself an instrumental mix of “Rotating Head” and found on the deluxe version of Special Beat Service.  And with that, we can stop and look around at what we otherwise missed!