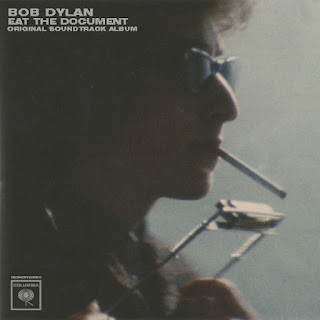 
My New Year’s Resolution is to keep this blog updated!  Starting off 2017 is an album that truly never was: the theoretical soundtrack to the unreleased documentary film Eat The Document, which chronicled Bob Dylan’s famous 1966 World Tour, backed by what would become The Band.  A behind-the-scenes look at a controversial and confrontational moment in rock history in which Dylan “went electric” to the great chagrin of his folk-purist audiences, the tour is filled with impassioned and even spiteful performances, a direct response from the jeers from the audience who thought he “sold out”.  This reconstruction compiles the soundboard recordings of the actual, full performances only partially featured on Eat The Document, presented in (mostly) film order, edited to sound as a continuous performance and effectively becoming a unique Bob Dylan live album in itself.


Bob Dylan’s famed “Electric Trilogy”—1965’s Bringing It All Back Home, Highway 61 Revisited and 1966’s Blonde On Blonde—proved that rock music could be intellectual by combining his often abstract poetics into a rock band context.  While obviously a success on record, Dylan slowly tested the waters for a live incarnation of his vision throughout 1965, beginning with his performance at the Newport Folk Festival on July 25th, backed by the Buttersfield Blues Band--a performance allegedly infuriating Pete Seeger who attempted to cut all power to the stage!  Deciding he needed a formal and relatively trustworthy backing band for the following tours, Dylan hired Canadian bar-rockers The Hawks to back him on sporadic gigs throughout 1965.  Although The Hawks—who would later re-title themselves to The Band and see their own success—proved to be an excellent backing band in a live setting, they failed to accommodate Dylan in the studio.  Early sessions for Highway 61 Revisited’ s follow-up in January 1966 proved unusable to Dylan’s standard and he relocated to Nashville to finish the album; only “One of Us Must Know (Sooner or Later)” from the January New York sessions made the album.


Regardless, Dylan regrouped with his road-tested crew, intending to promote his new album Blond On Blonde with a world tour.  Although the tour went underway in February—before the album was even finished!—two new faces slipped into Dylan’s entourage by April.  The first was soundman Richard Alderson, who provided the PAs for the European leg of the World Tour.  Personally invited to make soundboard recordings of that leg of the tour by Dylan (in exchange for assistance in building Alderson’s dream recording studio), Alderson ran the sound while taping almost everything on a trusty mono Nagra recorder.  He was no stranger to this, since he had also recorded Dylan’s set at The Gaslight Café in 1962.


The second new face was filmmaker D.A. Pennebaker, who was tasked to film Dylan’s tour—onstage and off—to make a comprehensive document of the turbulent events.  Like Alderson, Pennebaker too was no stranger to Dylan’s inner-circle, as he had recently filmed Dylan’s acoustic European tour the previous year, eventually released as Don’t Look Back, the penultimate statement from Dylan’s live acoustic period.  Just like the previous year, Pennebaker filmed behind the scenes: early morning hangovers in hotel rooms; backstage celebrity jam sessions; furious audience members; an awkward limo ride with John Lennon.  Pennebaker also filmed the live performances themselves, usually on-stage with the man himself, getting extreme close-ups of a jubilant Dylan relishing in challenging the audience, their outrage only fueling him to rock harder.  But unlike Don’t Look Back (in which Dylan himself had little input), Dylan wanted directorial credit and final cut privilege.  After a handshake deal, Pennebaker was slated as cinematographer with the intent of Dylan and his crew editing Pennebaker’s footage for the ABC Television series ABC Stage 67.


The tour closed with a pair of shows at The Royal Albert Hall on May 26th and 27th, which were professionally recorded to three-track by CBS Records for a possible live album, but it never materialized (within the proceeding 50 years, anyways).  Exhausted, Dylan retired to his new home in Woodstock, NY for a temporary break until a motorcycle crash on July 29th gave him an excuse to retire from the live stage for an indefinite amount of time.  Meanwhile, Pennebaker and Bob Neuwirth compiled their own edit of the footage, tentatively called You Know Something Is Happening.  This edit was rejected by Dylan that summer, and he proceeded to create his own edit of the tour footage with Howard Alk and Gordon Quinn assisting.  Influenced by the surrealism movement, Dylan’s cut of the film relied on no established narrative, featured no complete performances and was assembled in no specific order.  It was titled Eat The Document, a paraphrased quip by music journalist Al Aronowitz suggesting how to approach the documentary medium itself.  Of course, ABC rejected Eat The Document as being incomprehensible to the general audience and has remained unreleased ever since.


Uneaten documents of the 1966 Tour eventually leaked out over time, beginning with bootleg copies of Alderson’s acetate recordings.  Reputation grew of the confrontational tour, which even led to a legendary misappropriation of a legendary show.  The Manchester Free Trade Hall show on May 17th featured a legendary jeer—calling Dylan a “Judas”, in which Dylan responds “You’re a liar!” and tells the band to “Play it fucking loud!”  The initial bootlegger intentionally mislabeled the show as being at the Royal Albert Hall so the records could be stealthy pressed as the album Royal by Albert Hall.  The bootleg’s fame had grown so much that an official recording sourced from CBS’s multitracks was scheduled in the 90s, even perpetuating its mythos by retaining the incorrect venue location as the Royal Albert Hall!  While this pristine stereo mix of the show was scrapped by Dylan, a bootleg sourced from a leaked Sony Records DAT tape appeared in 1995 as Guitars Kissing & The Contemporary Fix.  An official remixed rawer version that featured more of the room ambience was finally approved by Dylan and released as The Bootleg Series Vol 4 in 1998.


Pennebaker’s footage itself was scarcely seen aside from bootleg videos and private showings of Eat The Document until Martin Scorsese’s 2005 biopic No Direction Home.  Unlike Eat The Document, No Direction Home featured complete performances and even featured the entire Judas/Liar affair.  Finally, the 36-CD box set The 1966 Live Recordings was released in 2016, containing all of Alderson’s surviving soundboard tapes as well as the three shows professionally recorded to three-track by CBS (as well as a handful of audience tapes to represent the missing shows).  Due to the sudden availability of audio recordings paired with the No Direction Home footage, some online sleuths—notably members of the Expecting Rain forums—were able to piece together what specific performances were originally featured on Eat The Document, a task that was previously impossible due to Dylan & Alk’s abstract film editing techniques.  For the first time in fifty years, we are able to piece together an actual soundtrack to this film that never was!


All recordings on this reconstruction are taken from The 1966 Live Recordings, all being Alderson’s fantastic mono soundboard recordings.  The tracks are presented in the order as seen in Eat The Document, with the exception being that “Mr. Tambourine Man” is moved up to open Side B as a sort of acoustic intermission, and “Like a Rolling Stone” is moved down to end the album and create a finale.  Side A opens with the energetic Liverpool 5/14/66 performance of “Tell Me, Momma”, which was also featured on The Band’s 2005 anthology A Musical History.  This is followed by the driving Cardiff 5/11/66 take of “I Don’t Believe You (She Acts Like We Never Have Met)”.  While the film features a montage of three performances of “Ballad of a Thin Man” (from Newcastle, Cardiff and Glasgow), here we will use the entire Newcastle 5/21/66 performance in which Dylan truly accuses the audience itself to be the flabbergasted Mr. Jones.  Concluding the side is the anguished Belfast 5/6/66 performance of “Just Like Tom Thumb’s Blues.”


Side B begins with what we now know as the serene Newcastle performance of “Mr. Tambourine Man”, which merges into the rollicking Liverpool “Baby, Let Me Follow You Down.”  Next is the dusty Belfest performance of “One Too Many Mornings”; since the recording was incomplete, a patch is used from Sheffield 5/16/66 to create a full take of the song which luckily includes a large amount of booing from the audience, followed by Dylan’s taunting.  After an audience member requests his biggest hit, Dylan obliges and the album concludes with the powerful Liverpool “Like a Rolling Stone”.  The resulting album not only fills in the ambiguity left from Eat The Document, but creates a hair-raising live record filled with some of the highlights from his 1966 Tour, worthy of a theoretical release in March 1967 (a place surely taken by Bob Dylan’s Greatest Hits).  Although as an imaginary soundtrack to a film that was never released, it's a bit of a stretch... but when you got nothing, you got nothing to lose.

Posted by soniclovenoize at 9:39 PM