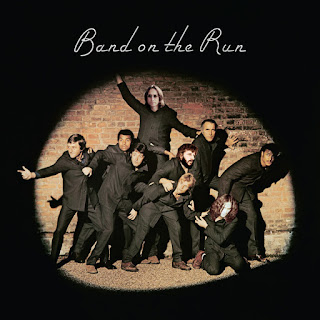 The Beatles – Band On The Run
(a soniclovenoize re-imagining)

This is a “re-imagined” Beatles album that presumes the question: What if The Beatles never broke up?  My Band On The Run collects the best of The Beatles solo material from and around 1973—including tracks from Band On The Run, Mind Games and Living In The Material World.  It is the fourth in a series which also includes The Beatles re-imagined albums: Instant Karma! (1970), Imagine Clouds Dripping (1971) and Living In The Material World (1972).

Thanks to one of Paul McCartney’s crown achievements in his post-Beatles career paired with some fairly solid material from John, George and Ringo, this re-imagined album becomes one of the best of the series.  As with the other three albums, my song selections centered on the ones that seemed to be the most “Beatlesy” and could come together as a unified album.  Starting with the stand-outs of Lennon’s Mind Games, the plethora of great McCartney tracks were chosen based on how they fit in with John’s.  Likewise, the remaining George songs that were not taken for my 1972 Beatles album Living In The Material World were contenders for Band On The Run, and the more serene and majestic tracks fit nicely with the Lennon and McCartney choices.  Of course Ringo’s “Photograph” was a necessity.

In my opinion, the resulting album was so cohesive that half of the songs all seemed to be in the same key, which allowed the first half of side B to crossfade continuously!  Note that the title track and it’s new sister-songs “I Know, I Know” and “No Words” lead off side B instead of side A because the album seemed to need the dynamic left and right punch of “Mind Games” and “Jet” to start the record.  Note that we are overlooking Deny Laine’s co-writing credit on “No Words”, since we’ve already been overlooking both Linda McCartney and Yoko Ono’s credits in this entire series!  But doesn’t Denny sing Lennon-esque harmonies anyways?  The final touch was the hilariously obvious cover art.

So sit back, relax and imagine:  After the long “Never Ending” North American Tour in 1972, The Beatles retreat to a secluded Nigerian studio to write and record songs for their next album; the serenity from the hectic touring and after-show parties make the band more focused and united in their efforts; the non-LP single “Give Me Love (Give Me Peace On Earth)” b/w “Picasso’s Last Words (Drink To Me)”, recording during these sessions, became a number one hit while The Beatles finished up the remainder of the album in back in London; Band On The Run was finally released in 1973 to massive critical and commercial acclaim, hailed as their “second Abbey Road.“

Seen as not only their best album if the 1970s but one of the best albums of The Beatles’ career, Band On The Run made up for any lost momentum from the previous year’s album Living In The Material World.  Two hit singles came from Band On The Run, including “Mind Games” b/w the non-LP B-side “Helen Wheels” and “Jet” b/w the non-LP B-side “Meat City”.  In support of the album, The Beatles embarked on a world tour in September 1973.  It would be bittersweet though, as at the conclusion of the recording sessions for Band On The Run John entered what was known as his “Lost Weekend”, which extended all through the tour and into next year.  Exasperated by John’s wild behavior and eminent disloyalty during the 1972 North American tour, Yoko Ono separated from John, presumably to allow him an extended bachelor party to exorcise his demons.  John embraced his new-found freedom with gusto, and the commercial success of Band On The Run and the resulting world tour was a stage for his increasing debauchery.  Into 1974 it was only Paul who recognized John’s downward spiral, and hoped there was a way to prevent The Beatles from saying ‘good night’…

Posted by soniclovenoize at 3:35 PM