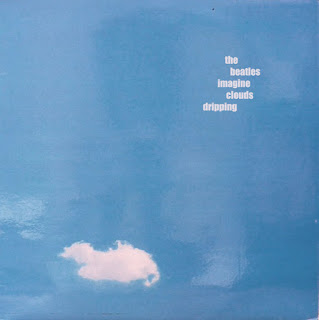 The songs were chosen not only for quality but for what could continue to carry ‘the Beatles torch’.  While the solo members continued to stylistically diverge, there were always songs that could be described, in my opinion, as “Beatlesque” and we have the luxury of choosing those above the other more idiosyncratic numbers.  The best and least brickwalled/clipping remasters were chosen for source material, volume levels adjusted for song-to-song balance and all songs are tightly book-ended to make a continuous two sides of music.  Also, a completely unique edit of “Dear Boy” and “Bangla Desh” is created when the two are hard-edited together, making them a medley.

Musically, Imagine Clouds Dripping abandons the bare-bones arrangements on the previous re-imagining for the lush Phil Spector arrangements George had requested for his songs.  “What Is Life”, “Art of Dying” and “Isn’t It A Pity” are all used on this album because they fit better with the RAM/Imagine contributions than with the Plastic Ono Band/McCartney contributions on the previous album.  The one drawback here is no contribution from Ringo; literally none of the Sentimental Journey and Beaucups of Blues songs even remotely fit on this or the previous album, and his more interesting solo singles chronologically appear later in my series.  But one must consider that over the course of The Beatles’ thirteen 1960s albums, a few albums had no Ringo contributions, such as Magical Mystery Tour and Let It Be; Imagine Clouds Dripping is simply one of those albums.   I feel this fellow Ringo-less album is excusable because this resulting album is so solid and unified.

The critics hail Imagine Clouds Dripping as one of the highest points of The Beatles career, comparing it to a second Sgt. Pepper.  There are a number of hit singles released throughout 1971, including “Imagine” with the non-LP B-side “Monkberry Moon Delight”, “Another Day” with the non-LP B-side “Crippled Inside” and “Jealous Guy” with the non-LP B-side “I Dig Love”.  And as aforementioned, “Bangla Desh” was released as a single to promote their concert, with the b-side being Ringo’s sole contribution from the Imagine Clouds Dripping sessions, an original “Choochy Coochy”.  While “Bangla Desh” was chosen to make the cut for the album, “Coochy Coochy” was not.  The success of The Beatles late 1971 European tour spurred them to plan an American tour in 1972, and a need for new material in the material world…