The Smashing Pumpkins - Glass and The Machines of God 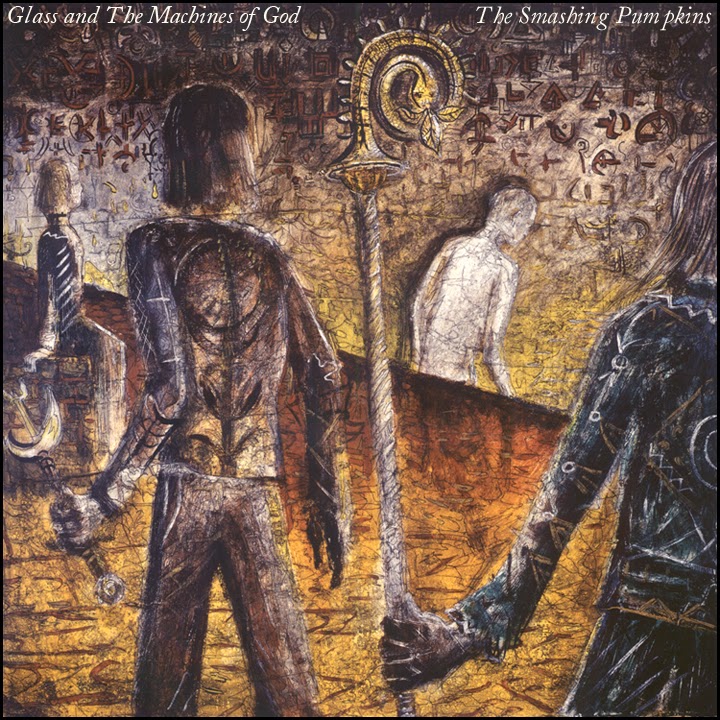 The Smashing Pumpkins –
Glass and The Machines of God

This is a reconstruction of the proposed double-concept album originally meant to be The Smashing Pumpkins’ fifth and final proper studio album in 1999.  Originally conceived as a rock opera, the concept was dropped because of band member disintegration and disinterest as well as record label pushback.  The album was eventually released as the massive commercial failure MACHINA/The Machines of God in 2000, with most of the leftover tracks released posthumously by the band without their label’s consent as MACHINA II/The Friends & Enemies of Modern Music later than year.  This reconstruction attempts to cull the best possible sources (including the Machina pre-master and the best vinyl rip of Machina II), unifying their respective volumes and organize them into a cohesive double album that follows the Machina storyline.  Specific alternate versions of some tracks were utilized to give the album more of an organic “live band”-sound as opposed to the overproduced Machina album.

The Smashing Pumpkins were no strangers to turmoil.  Firing their drummer Jimmy Chamberlin in 1996 for perpetual drug use, the band made a 180-turn from their patented guitar sonics that made 1995’s Mellon Collie and the Infinite Sadness a landmark double album to an unusual combination of acoustic and electronic for their follow-up, 1998’s Adore.  Despite having superior songwriting and inventive arrangements, the album was less of a success as their previous efforts.  The tour in support of the album showed the band re-interpreting the soft-spoken material for a live rock-band, and the eventual re-hiring of Chamberlin in late 1998 showed promise that The Smashing Pumpkins were back to what they did best: loud fuzzy guitars pared with some of the best drumming of the decade.

By April 1999, the band reconvened for their Arising Tour, meant to showcase the return of the original lineup.  Most of the set featured all new material, effortlessly written by head-Pumpkin Billy Corgan within the four months prior.  These tunes were part of a larger song cycle that would fill two CDs of a double-concept album tentatively called Glass and The Machines of God which concerned a rock star named Glass , his true love June, their rise and fall and Glass's redemption.  Most notably, the four members of The Smashing Pumpkins were to portray the characters of the concept album—Glass and his band The Machines of God, who were literal parodies of the public personas of the four members of The Smashing Pumpkins themselves —in promotion of the album.

Unfortunately the machine was never switched on.  Halfway through recording the album, bass player D’Arcy Wretzky was dismissed from the band due to alleged erratic behavior; how could the band portray a convincing parody of themselves without the key members?  The situation worsened with guitarist James Iha’s increasing ambivalence to the band itself, as well as a record label unwilling to promote a convoluted double-album follow-up to the commercial failure Adore.  The solution was to scrap the concept and release the best material as MACHINA/The Machines of God, much like Lifehouse became Who’s Next 25 years earlier (a reconstruction also featured on this blog).  Machina was even more of a failure than Adore and by the end of the tour in support of the album, Iha wanted out.  The Smashing Pumpkins played their final show that December.  In one final rebellious move against the record label that had abandoned him, Corgan released the outtakes from the Machina sessions as a limited edition vinyl release, Machina II, with the explicit instructions to share and pirate it, making the album one of the first to be freely distributed on the internet by a major artist.

Reconstructing Glass and The Machines of God is no easy task.  Corgan has been extremely vague and cryptic about how it would have been constructed, in as much as leaking false numerical codes allegedly forming track sequences.  Point of fact, of the 30-or-so songs recording during the sessions, Corgan has only divulged the narrative context of “Blue Skies Bring Tears”, “Speed Kills” and “With Every Light”.  Luckily Corgan has leaked a blueprint of the song cycle itself with a list of 17 of the cycle’s songs, all offering varying ways the songs could fit into the cycle.  Using this map, as well as song lyric interpretation matched with the synopsis of the album’s story written in Corgan’s typical superfluous prose, we are able to chart out a track sequence.  Both Corgan’s chart and his synopsis are included for reference.

The only issue left is what sources should be used.  To avoid the terrible mastering found on Machina I, I used a rip of the leaked pre-master, featuring a larger dynamic range as well as subtlety different mixes.  As for the Machina II tracks I used the best possible source, the Virgin promo rip.  I then re-EQd the entire rip to match the EQ parameters of the tracks that were officially released (since those few were sourced from a non-vinyl master).  Since we also have a number of alternate versions of many of the songs, I specifically vied towards the versions of the songs that featured more of an organic ‘live-band’ and stripped-down arrangement and production, as that was allegedly how Glass and The Machines of God would have sounded.  The bootlegs Machina Acoustic Demos and The Original FEMM Tape were used, they were not the "th13rteen remasters" but original CD rips.  Setting a 28-song limit to ensure that this not become too overblown, a few songs were left on the cutting room floor: “The Age of Innocence” is excluded from this reconstruction as the song was written and recorded at the last minute and tagged onto the end of the Machina album, having nothing to do with the song cycle at all; “Slow Dawn”, “Vanity” and “Saturnine” all seemed too unfinished, skeletal and unneeded to communicate the story; “Soul Power” was a cover; and “Le Deux Machina” was already an element of “Glass + The Ghost Children”.  By the end, I have arranged two nearly 60-minute discs of 14 songs each, which seemed to be The Standard Smashing Pumpkins Album Length.

Disc one beings with Glass establishing his character as a rather agnostic rock star, leader of The Machines of God, utilizing Corgan’s acoustic demo of “If There Is A God” which overlaps into the pummeling “Cash Car Star”; although most reconstructions of this album begin with “Glass Theme”, I chose this alternate route because this was how the band often performed the two songs live.  It was also quite reminiscent of the first two tracks from The Smashing Pumpkins’ 1994 b-sides compilation Pisces Iscariot, which always struck me as an extremely dynamic opening.  “The Imploding Voice” represents ‘The Voice’ of God speaking to Glass through the radio and instructing him to spread the word of love to the world through his music; “Wound” is Glass’s reaction to the sudden realization that he is a modern-day prophet and with “The Sacred + Profane” Glass begins to change the message of his band’s music with heavenly divination.

The next part of the song cycle involves Glass’s love interest June and so all of the ‘love songs’ are grouped together—“Stand Inside Your Love”, “Real Love”, “Innosence” and “Let Me Give The World To You”.  Following this, Glass reaches a ‘crossroads’ in trying to balance his hedonistic rock n roll life with June vs. what he believes as his spiritual duty, articulated in “The Crying Tree of Mercury”, “White Spyder” (the spyder being a symbol for June’s drug use) and “Raindrops + Sunshowers.”  Following is the standard Smashing Pumpkins epic 10-mnute track, “Glass + The Ghost Children” in which the dictaphone middle section now actually makes sense as it specifically deals with Glass confessing his holy charge to June but fearing he may be instead mad.  James Iha’s “Go” has been problematic as it didn’t seem to fit in with the Machina concept at all, so it is sequenced here to close disc one, much as his “Take Me Down” closes disc one of Mellon Collie.  Perhaps it is sung from June’s point of view?

The second disc opens with what Corgan revealed as the ‘live set’ of the album, in which several songs would be grouped together as a mock live performance of The Machines of God.  Opening with actual audience ambience from a soundboard tape of their 9/20/2000 performance, Glass has grown cynical from his fans’ perceived betrayal of ‘rock n roll’ in “Glass Theme” and questions if ‘The Voice’ was even real in “The Everlasting Gaze” as his own band’s record sales plummet.  June becomes alienated from Glass and her resent is stated in “Dross”, following by increased drug use and a withdrawal inside herself in “In My Body”.  After an explosive fight, June is killed in a car crash as depicted in “Speed Kills”, using the ‘live-band’ version from Machina 2.  Glass blames himself and this sends him over the edge in “Lucky 13”, finally deciding to break up the band in “Heavy Metal Machine”.

The night before the final show, Glass has a terrifying dream as heard in “Blue Skies Bring Tears”: a vision that without God, love, fans or even a band, he is now completely alone.  Here I chose an early arrangement of the song as performed on the Arising Tour to avoid the overproduced album versions.  Abandoning all belongings, Glass takes to the streets as a beggar, as depicted in “I of the Mourning”, and “Here’s To The Atom Bomb” (the mellow version from Machina 2).  In being alone and with nothing, he realizes that love, God, etc was there in his heart all along in “Try, Try, Try” (the mellow version found on the "Untitled" promo CD), “Home” and “This Time”.  The album closes with “With Every Light”, as Corgan had claimed, some sort of happy ending.

An interesting side note is that within 6 months to a year from now, Corgan plans to release a remixed and remastered Machina featuring his originally-intended double-album tracklist as a part of the remastered series of The Smashing Pumpkins’ discography.  Will it appear and sound as I have offered here?  That is anyone’s guess, and I am curious to see how close I am to his vision.  But keep in mind Billy Corgan’s penchant for historical revision, as well as the recent fan dissatisfaction with the remasters’ quality control issues.  Whether this reconstruction is truly what the artist intended, it will always be here as an 'album that never was' just in case the real deal is crushed underneath Corgan’s own heavy metal machine.

flac --> wav --> editing in SONAR and Audacity--> flac encoding via TLH lv8
*md5, artwork and tracknotes included
Posted by soniclovenoize at 6:08 AM