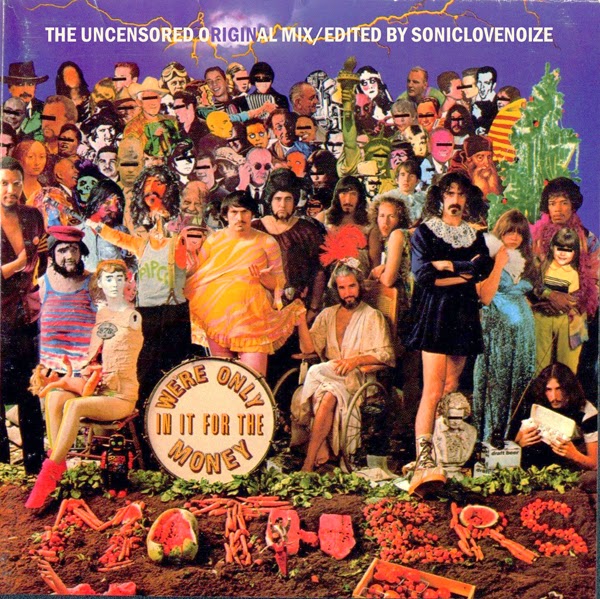 Okay okay okay…  Even Einstein was allowed a “biggest blunder” so cut me some slack, alright? On my blog, my biggest blunder (to date) was using the 1986 overdubbed version of We’re Only In It For The Money as source material for the patches for my Uncensored Original Mix.  I got a lot of flak for it, and I guess rightfully so.  Because certainly a completely uncensored stereo 1968 version of the album could be made, I just had to try harder!  Zappa fans spoke out against my ignorance, and so here is my UPGRADE to that.  Please forgive me!

The upgrades to this revision:
- A new edit of “Harry, You’re A Beast” is created, restoring the censored “Don’t cum in me, in me” verse using original 1968 recordings, NOT the 1986 overdubbed versions.  To do this, I re-assembled the entire cut-up verse in correct order, forward, using the mono master from Lumpy Money Project/Object.  I then synced that reassembled mono verse to the stereo instrumental backing track, creating a full stereo, uncensored verse for the first time ever (at least to my knowledge - no the acetate demo version is in mono and in subpar quality!)
- a new edit of “Mother People” is created, restoring the censored “Shut your fucking mouth” verse using original 1968 recordings, NOT the 1986 overdubbed version.  To do this, I took the reversed version of the verse from “Hot Poop”, swapped the channels to match “Mother People”, and inserted the verse to its proper place.  I then extracted the “Shut you fucking mouth” line from the mono mix found on Mothermania and restored the uncensored line in place.  To keep the stereophonic mixing of uniform, I panned the entire mono line to the right and added a low-pass-filtered mix of the line to the left.  The result was surprisingly cohesive and kept with Zappa’s original mixing scheme with the bass to the left and the drums to the right, with the only discrepancy that the singular vocal line being single-tracked for a second or two while the rest of the verse remains double-tracked.
- a new edit of “Hot Poop” is created, restoring the reversed and censored “Shut your fucking mouth” verse using original 1968 recordings.  To do this, I reversed the above edit I created for “Mother People”, swapped the channels and inserted it back into the track.

Note that my same edit of “Concentration Moon” is still used here because, although sourced from the 1986 remaster, there were no 1986 overdubs featured in the edit itself and it is technically all original 1968 material.

This was a special request a number of months ago, and it sounded like a fun challenge.  This  is my own unique edit of Frank Zappa & The Mothers of Invention’s We’re Only In It For The Money that utilizes all original 1968 stereo mixes, but reinstates all the originally censored material, thus creating a completely uncensored original mix.

Frank Zappa famously said, when accepting an award for his third album We’re Only In It For The Money, “I prefer that the award be presented to the guy who modified this record, because what you're hearing is more reflective of his work than mine.”  Although he was exaggerating a bit, it is certainly true that much of Zappa’s groundbreaking and cutting edge humor was softened or even literally removed for commercial release.  Numerous pieces of the album were edited to appease late 60s “decency standards”, thus beginning Zappa’s heavily-championed cause for artist’s Freedom of Speech and the battle against censorship and the suits who perpetuate it.  For decades, fans could only enjoy what the label thought would appease social standards at the time, rather than what the artist intended.  Luckily throughout the years, there were a handful of reissues and international repressing of the album that did reinstate many of the dubious censored pieces.

Currently, all but four specific alterations of the album had been restored to the original 1968 mix of We’re Only In It For The Money: the spoken Velvet Underground reference in “Concentration Moon”, the “Don’t cum in me” verse of “Harry, You’re A Beast”, the “Shut your fucking mouth” verse of “Mother People” and the reversed version of that same verse in “Hot Poop”.  But is there a way to reinstate these sections?  Some of those pieces exist on a bootleg of demos recorded for the album, but only exist in mono at the wrong tape speeds, and are thus unusable.  Maybe there is another option?

The next chapter of the album’s curious history began with revolutions in the recording industry, specifically the advent of digital mastering.  In 1986, the album was slated for a new digital remaster along with the rest of Frank Zappa’s discography.  In a move that is almost universally considered sacrilege by fans, Zappa utilized the remastering process as an excuse to literally replace the original drum and bass tracks on the album with a newly recorded rhythm section.  Not only was this new remaster of We’re Only in It For The Money condemned by purists, but the end result seemed extremely anachronistic with an obviously 1960s guitar, keyboard & vocal sound juxtaposed with an obviously 1980s drum & bass sound; today in the 2010s, the effect is exacerbated with the 1980s overdubs sounding extremely dated.  This version of the album is currently out-of-press, aside from being included in an exhaustive box set release from this era of The Mothers.

The only benefit of this horrid 1986 remix/remaster was that three of the aforementioned censored tracks, “Concentration Moon”, “Harry, You’re A Beast” and “Mother People”, all contained their original unedited, uncensored material, albeit with an infuriating re-recorded rhythm section ("Hot Poop" curiously retained the orignal, untouched reversed and censored line).  What can be a generally painful listen can also be revelatory in showing Zappa’s original artistic intent… in regards to the originally censored material, of course.

What I have done here is take the best master available of the original 1968 stereo mix (which reinstates all the minor censored parts that were internationally restored via reissues) and replaced the four remaining censored bits with their uncensored equivalents from a number of source, thus creating a completely uncensored and completely stereo version of We’re Only In It for The Money.  The spoken Velvet Underground line in “Concentration Moon” was mixed to mono and panned to 10:00 to match the original mix; the result sounds completely authentic as there were no 1986 overdubs underneath the edit.  The replaced verses of “Mother People” and “Harry, You’re A Beast” also fit perfectly, and are for the first time here in full stereo.  I even went ahead for extra credit and uncensored the backwards bit in “Hot Poop” for any anal-retentive listeners out there!

Other minor technical errors of the source material remaster were fixed, such as the rejoining of “Telephone Conversation” and “Bow Tie Daddy” into one track (as Zappa originally intended) and the correction of the half-second track-split offset that was inherent to this remaster.  With this, I hope you enjoy what Zappa originally intended us to hear, all in stereo.