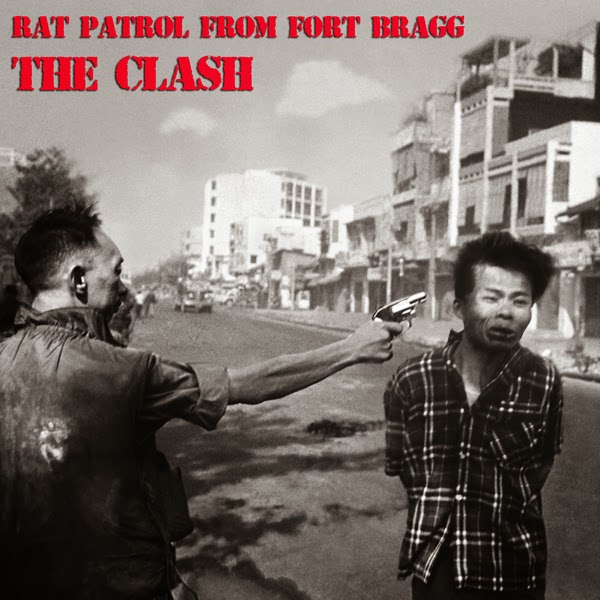 
A blog-follower request, this is a reconstruction of the unreleased Clash album Rat Patrol From Fort Bragg.   Originally conceived as a double-album by guitarist Mick Jones who had tried to harness more creative control of the band, Rat Patrol was eventually skimmed down and remixed into a more commercial single-disc, their seminal 1982 album Combat Rock.  Unlike other Rat Patrol bootlegs, this reconstruction follows Mick Jones’ actual track order found on his rough cut of the double-album.  Also my reconstruction uses a number of sources to provide the most complete, pristine and dynamic album possible, including remastered bootleg tracks and a needledrop vinyl rip of an original pressing of Combat Rock.  As always, all tracks are volume adjusted for a cohesive listening experience.


By the early 1980s, the cracks in The Clash had begun to form.  Coming off their daring 1980 triple-album Sandinista!, work began on their fifth album in late 1981 at a London rehearsal space, demoing new material with a mobile multitrack set-up.  While Clash frontman  Joe Strummer hoped for a more commercial and concise single album of roots-rock, guitarist Mick Jones wished to continue the world beat influence of their previous album, pushing the envelope to his current tastes in dub, reggae and American hip-hop.  Temporarily shelving their differences, The Clash embarked on a tour and residency to road-test the new material.  During this period, the band embraced images and concepts associated with the Vietnam War—or at least the Vietnam War as seen through the Hollywood lens.  They also embraced elements of urban American culture, even as much as having graffiti artist Futura 2000 paint the backdrop of their tour.  Blending this ‘ghetto’ and Vietnam War imagery together, they created an aesthetic of “urban warfare” which was perpetuated in Joe Strummers lyrics for the new material.  Was this perhaps a metaphor for the band’s own internal warfare?


Reconvening in New York’s Electric Ladyland Studios in late 1981—Mick’s choice as he felt that was the center of modern musical activity—The Clash got to work recording the album proper, led by Jones’ vision of a more funk/reggae/dub-inspired sound and fueled by Topper Headon’s appropriately globalized drumming.  Sides were drawn as Headon’s heroin addiction led to his own perception as being an outcast in the group and sided with Jones, leaving Joe Strummer and bassist Paul Simonon (who felt he had been forced to take a creative backseat) to unite on the other side of the battle field and vie for a single disc punk record.    As sessions progressed, the songs became longer—an obvious dub influence—and  despite Strummer’s worries that they needed a single-LP for CBS Records to properly promote the album, the project was steadily becoming yet another double album, possibly doomed to distribution limbo.  The situation amounted to running two studio rooms simultaneously so both Strummer and Jones could work independently on their vocals and guitar overdubs respectively, without having to actually interact with each other.


Just before leaving to tour Asia in early 1982, Mick Jones prepared his vision of the double album, provisionally titled Rat Patrol From Fort Bragg.  Long-winded, indulgent and sometimes even superfluous, the album contained 15 songs and ran over 65 minutes—and that was excluding at least four outtakes (“Overpowered By Funk”, “Walk Evil Walk”, “Midnight To Stevens” and “Long Time Jerk” did not make the cut on Jones’ sequence).  The rest of the band hated it and Joe Strummer championed to have the album remixed and edited into a more commercial product.  Strummer’s wishes eventually won and producer Glynn Johns was brought in to fix the album (note this is the third time this blog has covered an Album That Never Was that Glyn Johns was supposed to produce and/or clean-up, including The Beatles Get Back and The Who’s Lifehouse!!).


That April, Strummer and Johns reviewed the material at Wessex Studios in London and remixed the songs to emphasize its guitar elements and begin whittling the songs down to their basic necessity, eliminating their unneeded near raga-lengths.  “Know Your Rights”, “Red Angel Dragnet”, “Ghetto Defendant”, “Sean Flynn” and “Inoculated City” all lost approximately two minutes each.  The songs earmarked as singles, “Should I Stay Or Should I Go” and “Rock The Casbah” (the later actually referencing the raga-lengths of the Rat Patrol songs), were treated to new vocal tracks.  Four songs, “The Fulham Connection”, “First Night Back In London”, “Cool Confusion” and “Idle In Kangaroo Court W1”, were dropped entirely, while “Overpowered By Funk” was curiously added back into the running order.  Despite Mick Jones and allegations that his art had been tampered with, the album was appropriately retitled to Combat Rock and CBS Records had their more commercial, single-disc album, rush-released that May.


Even though the more concise album was commercially successful—both “Should I Stay or Should I Go” and “Rock The Casbah” became hits—the cracks in The Clash were too deep to be fixed.  Topper was removed from the band due to his excessive heroin addiction in May, the month Combat Rock was released; Mick was fired from the band the following year.  Both Jones and Headon went on to form Big Audio Dynamite, who was more reminiscent of the world-beat hybrid found on Rat Patrol, while Strummer and Simonon continued the Clash and recorded their final album ironically titled Cut The Crap (which was later disavowed by all band members).  But luckily through bootlegs and an assortment of bonus tracks and compilations, we are able to reconstruct what this less-commercial and raga-like Combat Rock would have been—what turned out to be The Clash’s unreleased swansong.


The overall primary concern for this Rat Patrol is sound quality.  While Mick Jones’ original mix of the album is available on bootlegs, they are usually sourced from a highly generated cassette; because of this, I occasionally chose to use the Combat Rock versions of some tracks rather than the bootlegged Mick Jones mixes for the sake of a pleasurable listening experience.  Luckily, fairly pristine versions of Jones’ mixes of “Rock The Casbah”, “Straight To Hell” and “Should I Stay or Should I Go” can be found on bootlegs, an alternate source than the muffled cassettes.  Likewise, the long Mick Jones mixes of “Ghetto Defendant” and “Sean Flynn” are found on the Sound System boxset.  The remaining tracks are sourced from a needledrop vinyl rip of Combat Rock by kel bazaar, which is the most pristine and dynamic version of the album I’ve heard.  We will also use the actual tracklist from Mick Jones’s master, which omits “Overpowered by Funk” and “Walk Evil Walk”.


Side A begins with Mick Jones’ original mix of “Straight To Hell” taken from the bootleg Rat Patrol from Fort Bragg on Redline Records.  It sounded a bit crusty so I personally re-EQd it to match the EQ parameters found on the vinyl rip of Combat Rock used elsewhere on this reconstruction.  Following is the shorter Glyn Johns mix of “Know Your Rights” from the vinyl rip of Combat Rock.  Mick’s very different original mix of “Rock The Casbah” is next, taken from the bootleg Another Combat Rock, again re-EQed to match the parameters of the album version.  The side concludes with “Red Angel Dragnet” from the vinyl rip of Combat Rock, again choosing the shorter album version; note if we had used the longer mixes, side A would have been ridiculously longer than the other sides anyways!  Side B opens with Mick’s mix of “Should I Stay or Should I Go” taken from Another Combat Rock, again reEQd to match the album version.  Closing disc one is Mick’s long mixes of “Ghetto Defendant” and “Sean Flynn”, taken from the Sound System box set.


Side C begins with “Car Jamming” from Combat Rock, being that the Johns and Jones mixes were fairly similar.  “The Fulham Connection”, also known and released as “The Beautiful People Are Ugly Too”, is taken from the Sound System box set.  Next is “Atom Tan” from Combat Rock (again not too different from its original mix) followed by “First Night Back in London” from the Sound System box set.  Side C starts with the unedited Combat Rock version of “Inoculated City” which features the original ’2000 Flushes’ sample, albeit not the long Mick’s version.  Next is “Death is a Star”, again from Combat Rock.  “Cool Confusion” from the box set follows, with the album finishing on the goony “Idle in Kangaroo Court W1” also known and bootlegged as “Kill Time”.


The final aspect is the cover image chosen myself, the famed photograph of the execution of Nguyễn Văn Lém in 1968.  While it may be either clichéd or insensitive by 2014 standards, this photograph would have been controversial in 1982 and I felt that it accurately communicated the lyrical references to the Vietnam War and the notion of “urban warfare” contained in Rat Patrol From Fort Bragg.


*md5, artwork and tracknotes included
Posted by soniclovenoize at 6:41 PM