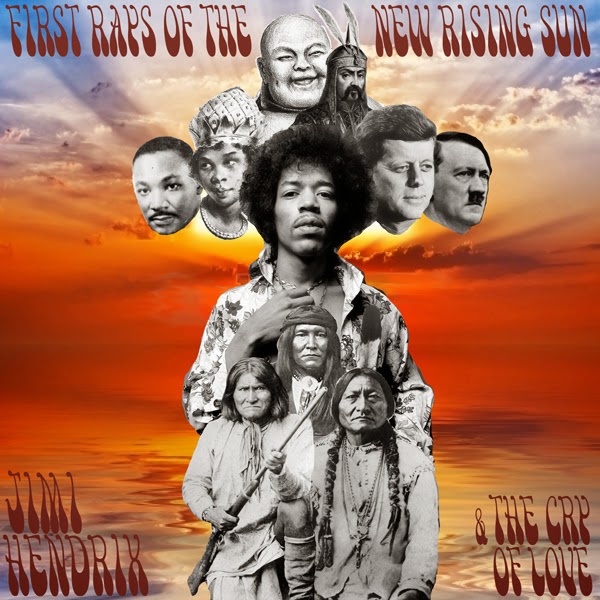 Happy Halloween!  This is an UPGRADE to my reconstruction of Jimi Hendrix’s final album before he passed away, First Rays of the New Rising Sun.  Hendrix had spent the final year of his life—and especially the final months—working on what would-have-been a double-album follow-up to Electric Ladyland.  Instead of assembling the album as Hendrix had envisioned, the material was dashed together by producer Alan Douglas and released on a number of posthumous albums, including The Cry of Love, Rainbow Bridge, War Heroes, Loose Ends and Voodoo Soup.  After securing the legal rights to his catalog, a separate attempt was made by The Hendrix Estate in 1997 to re-issue a compilation meant to replicate Hendrix’s wishes for First Rays, but many fans noted that poor song selection and mastering missed the mark as well.  My reconstruction attempts to gather all of Jimi Hendrix’s own final mixes of the most completed tracks when possible (13 out of 18 songs), ignoring posthumous mixes.  Also  the sources featuring the best mastering and highest dynamics are used to correct what both Douglas and The Hendrix Estate could not, and present a more accurate representation of what Hendrix desired for his swansong and come-back album.

The upgrades to this Nov 2014 edition are:

1969 was the year of metaphorical death and rebirth for Jimi Hendrix.  After dissolving his chart-topping power trio The Jimi Hendrix Experience and it’s following brief incarnation Gypsy Sun and Rainbows (who backed him at Woodstock), Hendrix was under pressure by Civil Rights activists to form an all-black band.  His answer was Band of Gypsies, featuring bassist Billy Cox (who had played in Gypsy Sun and Rainbows) and drummer Buddy Miles.  The trio set out to rehearse all-new Hendrix originals to fulfill a contractual loophole in which Hendrix owed producer Ed Chalpin an album’s worth of new material; the result was the live album Band of Gypsies, which showcased more structured songs with a funk and R&B-influenced sound, of course infused with Hendrix’s own penchant for psychedelia and guitar wizardry.   A studio single “Stepping Stone” b/w “Izabella” was also released at this time, before being quickly withdrawn due to Hendrix’s dissatisfaction with the mix.  Although the band dissolved in January 1970, Hendrix had written a vast amount of new material with the trio and had secretly set aside what he deemed the best material from the live Band of Gypsies album for his fourth proper studio album, what he was now announcing to the press as First Rays of The New Rising Sun.

Hendrix quickly reformed a new backing band, this time featuring the winning combination of Experience drummer Mitch Mitchell and Band of Gypsies bassist Billy Cox (who were the core rhythm section of Gypsy Sun and Rainbows), called The Cry of Love (although billed as The Jimi Hendrix Experience for commercial reasons).  Recording sessions commenced at The Record Plant from January to May; while touring that spring, Hendrix compiled a list of 24 songs to be considered for the album (at that point called Straight Ahead), all in various forms of studio completion (as shown by checks or Xs) from the Record Plant sessions.  After the first leg of their American tour, the trio returned off and on to Hendrix’s own Electric Ladyland Studios in June and July, recording more basic tracks as well as new work on the withdrawn Band of Gypsies single, “Stepping Stone” and “Izabella”.  By this point, Straight Ahead had reverted to its original title First Rays of the New Rising Sun, and had been described as an intended double-album by Hendrix’s inner circle.

In late August, Hendrix and producer Eddie Kramer added overdubs and prepared mixes of several songs for the album, although we can never be sure if they were truly the final mixes, as Hendrix tended to add subtle touches to every song right up until their final release.   Regardless, tracks mixed by Hendrix at this time include: “Room Full of Mirrors”, “Ezy Ryder”, “Earth Blues”, “Night Bird Flying”, “Straight Ahead”, “Drifter’s Escape”, “Astro Man”, “Freedom”, “Dolly Dagger”, “In From The Storm” and curiously a solo demo version of “Belly Button Window.”  Of these, both “Dolly Dagger” and “Night Bird Flying” were approved as final, finished mixes and were dashed off to be mastered for a single release.  At this session it is believed that Hendrix began creating a tracklist for First Rays of the New Rising Sun, scrawled on the back of a 3M tapebox.  While Sides A and B seemed fairly definite, Side C had several titles scratched out or in parenthesis; Side D was left blank.

Hendrix and The Cry of Love jaunted off for their ill-fated European Tour, beginning with the Isle of Wight Festival on August 30th.  As September rolled on, the shows were met with jeering and Hendrix’s spirits were visibly diminished.  Taking a week off in London, a paranoid Billy Cox apparently quit the group and headed home.  Spending his final days with figure skater Monika Dannemann, Hendrix created an illustration featuring his face as well as famous White, Black, Asian and Native American faces in the shape of cross which some believe to be a cover concept for First Rays of the New Rising Sun.  Hendrix was found dead the next day.

Most of the completed material for First Rays was gathered together and assembled into the first of many posthumous Hendrix releases, The Cry of Love, released in 1971.  Coupled with many of Hendrix’s own working mixes from August 22-25th, additional recording was done to “Angel” and “Drifting” to make them release-worthy.  More tracks were mixed posthumously and appeared on the Rainbow Bridge soundtrack in 1972 with the bottom of the barrel scraped for War Heroes in 1973 and Loose Ends in 1974.  Producer Alan Douglas attempted to recreate a First Rays-like reconstruction in 1995 as Voodoo Soup, which blasphemously featured contemporary overdubs!  After gaining control of his catalog, The Hendrix Estate issued their own reconstruction of First Rays in 1997, perhaps the closest yet, but still missing a few key components.  Here we will try to set the record straight (ahead).

Luckily, our work is cut out for us as Hendrix himself had already decided on a track order for disc 1, as per his list scrawled on the back of a 3M tape box (which is included for your reference); our work is half done!  Opening Side A is “Dolly Dagger” from the amazing 2014 remaster of Rainbow Bridge.  Following is “Night Bird Flying” from the equally amazing 2014 remaster of Cry of Love.  While this title also was scrawled in as opening side C, it is written in boldface as the second track on side B, suggesting it was a later and more definite revision, and is thus used here.  “Room Full of Mirrors”, again from Rainbow Bridge is next, followed by Hendrix’s solo demo of “Belly Botton Window” from Cry of Love. While many don’t believe this drastic dynamic shift would have been on the album, I think it’s a rather welcomed change in the side’s flow, and we’ll stick to Jimi’s wishes.  The side closes with “Freedom” from Cry of Love.  Side B opens with “Ezy Rider”, followed by “Astro Man”, “Drifting” and “Straight Ahead”, all also taken from Cry of Love.  Many fans question Jimi’s tracklist here, as side B is much shorter than A, running four songs at 16 minutes compared to five songs at 19 minutes.  While that may be true, I will stand by Jimi’s choice here as what he intended, and furthermore I feel that despite its length, it sounds like a fairly complete side.  This is apparently what Hendrix wanted for First Rays: a concise album, no sprawling instrumental experiments, just all killer and no filler.

With disc 1 complete, we are left to create the second disc Jimi never got around to.  The method for my disc two reconstruction is simple: use the remaining complete (or mostly complete) tracks to make a second disc that is as comparable as possible to the first: straight-forward funk/R&B, running nine songs at 35 minutes with the fourth side shorter than the third.  We will drop some songs that are too skeletal (“Cherokee Mist”), others that do not feature the funky R&B sound of disc one (“Come Down Hard On Me”) as well as instrumentals that would not have made the cut anyways (“Pali Gap”).  For the case of side C, we will open it with an upbeat soul-rocker, as side A did: with “Earth Blues”, using Jimi’s own vintage mix found on the Purple Box, as opposed to the posthumous mix on Rainbow Bridge.  Next is “Izabella”, portraying the equivalent of “Night Bird Flying”, using Hendrix’s own original vintage mix found on the Band of Gypsies 7” (a rare mix that is exclusive only to that release).  Following is the more aggressive rocker, the part played by “Drifter’s Escape”, again using Hendrix’s own mix found on South Saturn Delta.  The idiosyncratic dynamic shift is next with “Beginnings” taken from a vinyl rip of Loose Ends; although we are avoiding instrumentals, it is included because not only does it fit the sound of the album, but it was written in as a contender for side C by Hendrix.  The side also closes as per his wishes, with “Angel” taken from The Cry of Love.

Side D opens much like B, with the dense, heavy guitar fury of “Stepping Stone”, again using the extremely rare vintage Hendrix mix found on the Band of Gypsies 7” as opposed to the posthumous mix on War Heroes.  The side's bouncy rocker follows with “Bleeding Heart”, taken from War Heroes, and then the mid-tempo epic “Hey Baby (New Rising Sun)” taken from Rainbow Bridge.  Much like the previous disc, the album ends with a mid-tempo groove-rocker “In From The Storm”, here using Hendrix’s own vintage mix from West Cost Seattle Boy as opposed to the posthumous mix found on The Cry of Love.  In the end, we have a second nine-song, 35-minute disc that matches the first.  The final touch is my own collage reproduction of the sketch Hendrix made the day before his death, possibly his actual cover art idea: Hendrix’s own face in the center of a cross; with Martin Luther King Jr and an African queen on the left arm (representing blacks); John F Kennedy and Adolph Hitler on the right arm (representing whites); Buddha and Genghis Khan in the top arm (representing Asians); Cochise, Crazy Horse and Geronimo on the bottom arm (representing Native Americans).  While I have no idea why Hitler is right next to JFK, we will accommodate Hendrix's own concept; please excuse any perceived audacity.  This, coupled with the two discs of this set, seem to be the first rays of what could have been Jimi’s last rising sun.