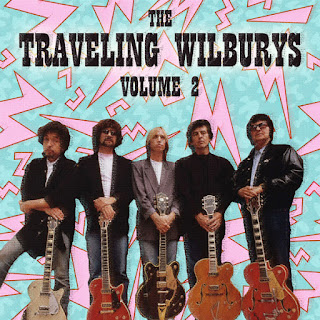 In remembrance of Tom Petty after his recent passing earlier this month, this is a re-imagining of the unrecorded Traveling Wilburys album Volume 2, which would have logically appeared in-between  1988’s Volume 1 and 1990’s Volume 2.  Culling material from 1989 that featured shared-contributions from four of the five band members Tom Petty, Roy Orbison, George Harrison and Jeff Lynne, this re-imagination attempts to fill the gap and present a cohesive album. Best sources have all been used and all tracks volume adjusted for continuity.

Just five friends, sitting around a campfire, strumming acoustic guitars and makin’ up songs.  Sound familiar?  We all might have done it at some point.  But in this case those five friends were Bob Dylan, George Harrison, Roy Orbison, Tom Petty and Jeff Lynne, and the songs they just simply made-up became Top 10 Hits.  The back-story is well known: George Harrison needed a b-side for his “This Is Love” single and over dinner with friends Roy Orbison and producer Jeff Lynne, asked them for help.  Bob Dylan provided the studio and Tom Petty brought the guitars.  Soon enough, the quartet quickly wrote and recorded a song in April 1988, each contributing one-off lines of lyric.  The result was “Handle With Care”, a song Warner Bros thought was too great for a mere b-side.  The band—now called the Traveling Wilburys—adopted personas Nelson (Harrison), Lefty (Orbison), Otis (Lynne), Lucky (Dylan) and Charlie T (Petty) and recorded a full-length album.  Released in October 1988, Volume 1 became a hit and The Traveling Wilburys were the premier super-group at the end of the 1980s.  But then what?  When the fun was over, the five friends went back to their own individual projects, although the various members often continued to contribute with each other.

Roy Orbison had already been working on his comeback album throughout 1988, partially produced by Jeff Lynne.  “You Got It” and “California Blue” were co-written by Tom Petty and Lynne, and “A Love So Beautiful” co-written with Lynne; both Petty and Lynne also performed on the album, with other tracks produced by one of Petty’s Heartbreakers’ Mike Campbell.   Tragically, Orbison passed away in December 1988 and the album Mystery Girl was released the following January, making the album a posthumous hit and a fitting epitaph to the legendary rocker who helped shape Rock n' Roll.

Tom Petty himself was also working on a new album throughout 1988.  This time abandoning his backing band The Heartbreakers in order to be free of any musical expectations (although ironically still featuring most of The Heartbreakers anyways), the album too was co-written and produced by Jeff Lynne, who played many instruments on the album.  Recorded in Heartbreakers guitarist Mike Campbell’s garage, the trio worked on the album throughout 1988, compiling a very concise and strong body of work featuring fellow Wilburys George Harrison on “I Won’t Back Down” and Roy Orbison on “Zombie Zoo”.  Unfortunately, MCA records were originally unsure of the marketability of the album and hesitated to release it that year.  But after the success of The Traveling Wilbury’s (and the addition of the newly-recorded “I’ll Feel A Lot Better” to commercialize the album a bit) MCA welcomed Lynne’s slick sound and Full Moon Fever was released in April 1989 to critical and commercial acclaim, many considering it Petty’s masterwork.

In contrast to Petty, George Harrison was just beginning to let his career go into hibernation.  Content with the success of 1987’s Lynne-produced Cloud Nine and being the figurehead of The Traveling Wilburys, Harrison only completed an unfinished track from the Cloud Nine sessions, “Cheer Down”, in March 1989.  Co-written by Tom Petty and once again produced by Jeff Lynne, the song was released on the Lethal Weapon 2 soundtrack in August.  George also recorded two more tracks in his home studio Friar Park in July, meant for an October release on his upcoming Best of Dark Horse 1976-1989 compilation: the solid “Poor Little Girl” and meager “Cockamamie Business”.  Although the production credit was assigned to Harrison, Jeff Lynne again contributed instrumentation and the songs more-than coincidentally sounded like Lynne’s idiosyncratic production.

Jeff Lynne himself was busy in the studio recording a solo album, his first since Electric Light Orchestra’s Balance of Power in 1986.  Throughout 1989 and 1990, Lynne whittled away at Posh Studios in England, often with his familiar Wilbury bandmates: Tom Petty co-wrote “Blown Away” and Harrison was featured on “Every Little Thing”, “Lift Me Up”, “September Song” and “Stormy Weather”.  The album Armchair Theatre was released as a moderate success in June 1990.

What about that pesky fifth Wilbury, Lucky?  Bob Dylan was mostly apart from his four bandmates throughout 1989, just starting his Neverending Tour and recording with producer Daniel Lanois in New Orleans from February to April 1989.  The resulting album Oh Mercy released in September (a month before Volume 1), while hailed as Dylan’s masterpiece of the 1980s, was the complete opposite of a Jeff Lynne-produced album: it was dark, atmospheric and organic.  After more touring, Dylan made a complete about-face and recorded the follow-up with producer Don Was in Los Angeles from April to May in 1990.  Although the resulting album Under The Red Sky did feature a guitar solo by George Harrison on the title song, the album was an over-polished shamble of absurdly simple songs—very uncharacteristic for Dylan--and was seen almost immediately as a career embarrassment.  It would take him another seven years to regain his creative footing.

After Orbison’s death, the remaining four Wilburys reconvened with a follow-up album tracked while Dylan was recording Under The Red Sky in Los Angeles.  Released in October and entitled Volume 3 as a joke at Harrison’s suggestion, the four members also donned new aliases: Spike, Muddy, Clayton and Boo.  Although a quaint sophomore release with moderate charting singles “She’s My Baby” and “Inside Out”, the album lacked the magic of Volume 1.  Upon Harrison’s death in 2001, The Traveling Wilbury’s were put to rest indefinitely without their founding brother.  But is there a way to make these volumes a trilogy and uncover the “missing” Wilbury’s album?

Many have tried reconstructing a third Traveling Wilburys album, so my take on a Volume 2 will heed to a few rules.  Much like my CSNY Human Highway reconstruction, I will compile the solo material that each member recorded or released approximately in between both Volume 1 and 3 (generally in 1989).  I will also be selecting the songs that featured the most amount of Wilburys, with a minimum requirement of two contributing Wilburys for a song.  This will unfortunately exclude Dylan’s Oh Mercy album, as it had little to do with the other members.  Likewise, Under The Red Sky will also be disqualified since it was recorded simultaneously with Volume 3.  This is reasonable, since neither album really fits with Jeff Lynne’s production, in which the remaining tracks are steeping.  Sorry Bob…  The second rule is to follow the pattern of the other two Wilburys albums and only use original compositions.  This would exclude miscellaneous cover songs actually recorded by the Traveling Wilburys, such as “Nobody’s Child” and “Runaway”, as well as Jeff Lynne’s “Stormy Weather” and “September Song”.  I will also shy away from tracks that were later overdubbed by Dhani Harrison in 2007, “Maxine” and “Like a Ship”.None of these are needed anyways, as there is more than enough material spread across Armchair Theatre, Full Moon Fever, Mystery Girl and Best of Dark Horse.

Of the ten songs assembled, including co-songwriting, performance and production: Tom Petty contributed to seven songs; George Harrison contributed to five songs; Roy Orbison contributed to three songs; Jeff Lynne contributed to all ten; Bob Dylan contributed to exactly none.  Although you might be miffed that Lucky was not so lucky this time around, it is reasonable that if Volume 3 did not feature Orbison, Volume 2 wouldn’t have to feature Dylan.  If you disagree, feel free to swap “Runnin’ Down A Dream” with “Under The Red Sky” and even the playing field a bit.   Otherwise, may your Halloween be a full moon fever.

Posted by soniclovenoize at 11:16 AM