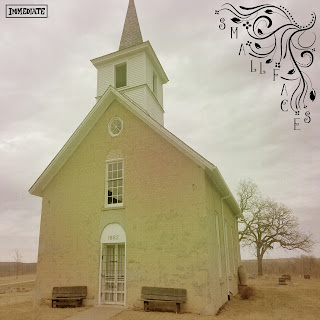 Continuing our weekly Social Distancing bonus reconstructions, this a long-requested one.  This is a reconstruction of the unfinished final Small Faces album, 1862.  Recorded throughout 1968, Small Faces broke up before finishing the album.  Several of the tracks would instead eventually appear on their posthumous 1969 collection The Autumn Stone.  This reconstruction attempts to present 1862 as a completed album, using the best quality stereo mixes of the material.

After their smash hits of “Itchycoo Park” and “Tin Soldier”, the release of Small Faces third album Ogden’s Nut Gone Flake ushered the band into the emerging art-rock scene, being a psychedelic concept album with unique, circular packaging.  Its single “Lazy Sunday” charted to number two in 1968, making them one of the top bands in the UK.  Although the band felt they had already achieved their masterpiece, they returned to Trident studios with Glyn Johns to work on a follow-up album the day before Ogden’s release in May.  The theoretical fourth album was titled 1862, named after the metal plaque on the hundred-year-old chapel owned by Marriott, where the band rehearsed.  Top priority was a cover of Tim Hardin’s “Red Balloon”, a bittersweet folk ballad about heroin addiction.  Also tracked were two instrumentals, ambiguously named “Fred” and “Jack”, which the band never went back to finish.

Several weeks later in June, the Small Faces went in to Olympic Studios to record a stopgap single between Ogden’s and 1862: the folk ballad “Hello The Universal” and the poppy rocker “Donkey Rides, A Penny, A Glass”.  An elaborate third song was recorded, “Wide Eyed Girl on the Wall”, but was apparently never completed, lacking vocals; like “Fred” and “Jack”, Small Faces never returned to complete the track.  The two finished songs were released as a single at the end of the month, but failed to mimic their previous success, despite being better compositions with more refined arrangement and production.  Furthermore, due to a pressing typo, “Hello The Universal” was misscredited simply as “The Universal”.

Touring to support Odgen’s also proved difficult, as the material was just too complex to perform live.   Frontman Steve Marriott pitched the idea of adding a fifth member as a second guitarist, freeing himself to focus on singing—the prime candidate was Marriott’s friend Peter Frampton.  The rest of the band detested the idea, and they soldered on as a quartet.  Returning to Olympic in September, two more contrasting songs were tracked: the hard rocker of “Wham Bam Thank You Ma’am” and the pastoral folk ballad “The Autumn Stone.”  The band did not take so kindly to the former, with bassist Ronnie Lane storming out of the sessions and keyboardist Ian McLagan refusing to play on it.  Regardless, the heavy riff rock of “Wham Bam Thank You Ma’am” signaled the direction Marriott wanted to move in, and he brought in Nicky Hopkins to complete McLagan’s parts!

In December, Glyn Johns invited the Small Faces to act as a backing band for French singer Johnny Hallyday and to record an album.  Being in a state of confusion, uncertainty and debt to their label, the band accepted but somehow found Peter Frampton joining their ranks from the recommendation of either Marriott or Johns.  In the course of the sessions, a few Marriott originals were worked up for Hallyday: a cover of an older Small Faces song “That Man” and two newer compositions, “Bang!” and “What You Will”.  The perceptions of the resultant album Riviere Ouvre Ton were contrasting; while McLagan and drummer Kenney Jones thought the sessions were awful, Marriott relished the opportunity to work with Frampton and took this as a sign to restart anew.  Marriott officially quit Small Faces, storming off stage on their New Years Eve performance.

With perfect timing, Immediate Records released a new mix of “Afterglow”, backed with “Wham Bam Thank You Ma’am” (again misprinted as “Wham Bam Thank You Man”) in March 1969.  Marriott immediately formed a new group with Frampton called Humble Pie, with a decidingly heavier sound, as heard in “Wham Bam”.  Their debut single “Natural Born Bugie” featured a new recording of “Fred”, the instrumental from the May Trident sessions, now including a vocal and retitled “Wrist Job”.  Humble Pie’s debut album As Safe as Yesterday Is was released in August, which featured new recordings of “Bang” and “What You Will”, as well as folk jam “Growing Closer”, written as a collaboration between Frampton and McLagan, who had briefly rehearsed with Humble Pie before declining a position in the band.  Simultaneously, McLagan, Lane and Jones regrouped with new frontman Rod Stewart and future Rolling Stones guitarist Ronnie Wood as just simply the Faces.  By the end of the year, the quintet began recording their debut album, First Step, which had a very rootsy atmosphere.  While largely Stewart and Wood compositions, the 1970 album did feature an older Ronnie Lane original, “Stone”, which initially appeared as a collaboration with Pete Townshend as “Evolution” the previous year.

Putting Faces and Humble Pie aside, Immediate also attempted a final cash grab for the Small Faces: a posthumous compilation album originally titled In Memorium, which contained some of the material recorded for 1862: “Red Balloon”, “Wide Eyed Girl on the Wall” and “The Autumn Stone.”  In Memorium also included a pair of songs long-attributed to 1862, but which were actually Ogden’s outtakes: “Call It Something Nice”, recorded at the very first Ogden’s session in April 1967, and “Collibosher”, recorded at the very last Odgen’s session in April 1968!  The Small Faces showed dismay for the morbid title, and Immediate withdrew and renamed the album The Autumn Stone, reissued as a double LP.  This edition added “The Universal” and “Wham Bam Thank You Ma’am”, now harboring most of the finished 1862 recordings.  Throughout the years, the twin instrumentals “Fred” and “Jack” made their way from the vaults to discount-bin anthology CDs, both mysteriously retitled to “The Pig Trotters” and “The War of The Worlds” without any band authorization.  This was the final say of 1862, its scraps littering The Autumn Stone and as various CD reissue bonus tracks and as a living mystery in the minds of Small Faces fans.

Interestingly, some clues to 1862 were found in a blog post by Mick Taylor in 2008 regarding the backstory of the song “Red Balloon”; the blog post had some contribution from Toby Marriott, Steve’s son.  In the post, Toby mentions he had once read his father’s 1968 songbook, which stated the possible tracklist for 1862: “The Autumn Stone”, “Red Balloon”, “Collibosher”, “Buttermilk Boy”, “Wrist Job”, “Piccaninny”, “Wide Eyed Girl On The Wall”, “Donkey Rides, A Penny, A Glass” and a song only referenced as “Blues Jam.”  What is strange about this tracklist is its inclusion of the December 1966 outtake “Piccaninny”, severely out-of-date amongst the 1968 sessions, as well as “Buttermilk Boy”, recorded for As Safe as Yesterday Is.  Toby also mentions he no longer had the songbook, so he had to have been listing them from memory.  Can his recollection be trusted?  We will use this as a simple guidepost to reconstruct 1862 and try to logically fill in the gaps.

For my reconstruction, we will take all these facts into account, but primarily intending to make an 1862 that sound musically cohesive.  We will also exclusively use Small Faces mixes found on the Here Come The Nice box set, being all stereo remixes that sound simply exquisite, as opposed to the crud on The Autumn Stone.  We will also rely on the several instrumental tracks, but we will appropriately fade them out to make them of a concise length and spread them throughout the album.  I have chosen to exclude both “Piccaninny” and “Call It Something Nice”, as they both pre-dated the recording sessions for 1862 and do not sonically sound identical enough to the rest of the material (although I will use “Collibosher”, as it was at least tracked in 1968).  Additionally, we will use some tracks from As Safe As Yesterday Is and First Step, since a few of their tracks dated from the 1862 era and, fortunately for us, sound sonically similar to the finished 1862 tracks anyways.

Side A begins with the single that highlighted this era, “Hello The Universal” and “Donkey Rides, A Penny, A Glass,” both great introductions to the album.  Next, “Wide Eyed Girl On The Wall”, the stereo mix which has a new fade-out to match the mono mix, followed by “The Autumn Stone.”  Next I chose Face’s “Evolution” as not only does it feature most of the Small Faces, it could have very well been Ronnie Lane’s contribution to the original 1862 album since the song dated from around that time.  Side A dramatically closes with “The War of The Worlds”, faded out to make it an appropriate length.

Side B begins with “Red Balloon”, another keystone song in 1862.  This is followed by the Humble Pie version of “What You Will” since the song was worked on by Small Faces during the Hallyday sessions, not to mention the song distinctly sounds like an 1862 song!  Although “Collibosher” dates from the final Ogden’s sessions, it does sound remarkably like an 1862 song, so I am including it here, again fading it out early to be concise.  Next, I’ve chosen “Growing Closer” from As Safe As Yesterday Is, as it could have been Ian McLagan’s contribution to the album, not to mention the acoustic and flute seemed to fit perfectly in the album!  Following is “Wrist Job”, using the Small Face’s instrumental instead of the Humble Pie lyrical version.  The album closes with a punch—“Wham Bam Thank You Ma’am”, in true stereo!