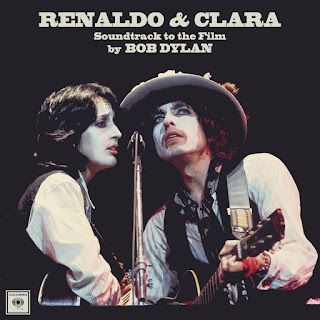 1. When I Paint My Masterpiece

5. It Takes A Lot To Laugh, It Takes a Train To Cry

7. One More Cup of Coffee (Valley Below)

Happy Year’s Eve-- only 12 hours to go, depending on your time zone! Let’s end this garbage year with the third of a trilogy of famous live albums that never were, in remembrance of the recently deceased concept of live music. This is a reconstruction of the theoretical soundtrack to the unreleased 1978 Bob Dylan film Renaldo & Clara, which contained vignettes and live footage recorded on the first leg of the Rolling Thunder Revue in 1975. Sourced primarily from the Rolling Thunder Revue boxset, this reconstruction presents how a single-disc soundtrack to the film could have been presented, featuring solely the live performances of Dylan and his band. All songs have been volume adjusted for cohesiveness, presented in film order and structured as two continuous sides of a musical performance.

Following his 1970’s renaissance—jumpstarted by the critically acclaimed Blood on the Tracks album—Dylan longed for one of the things he never had: a stable backing band. Hanging out in 1975 at New York nightclub/coffeehouse/music venue The Other End, Dylan took note of Patti Smith’s backing band and desired to form one of his own for Blood On The Tracks’ follow-up. Working with playwright Jacques Levy (another patron of The Other End), Dylan had crafted an album’s worth of new material worthy to follow Blood on The Tracks, albeit less personal and decidedly more cinematic. Recruiting bassist Rob Stoner & drummer Howard Wyeth from The Other End and violinist Scarlet Rivera literally on a street corner, Dylan had the core of his band in place. With the addition of budding songstress Emmylou Harris on backing vocals and a series of session musicians to round out the ensemble, recording sessions for the Desire album commenced in July 1975. At first chaotic with too many musicians chiming into Dylan’s newer—and longer—songs, Stoner suggested stripping the band to the aforementioned core; by the end of the month, they had the majority of the album in the can.

But some Dylanologists suggest Desire was a means to an end, with the goal being touring again with a band of his own. That fall, the core of Dylan, Stoner, Wyeth and Rivera were enhanced by guitarists Mick Ronson, T Bone Burnett and Steven Soles, multi-instrumentalist David Mansfield and percussionist Luther Rix. Another The Other End recruit, Ronee Blakley, came aboard to fill Emmylou Harris’s position, who was not able to tour due to her own career and session work. After returning to the studio to record a less libelous version of “Hurricane," the ragtag group hit the road with a pair of Halloween shows at the War Memorial Auditorium in Plymouth, MA. But this was no ordinary rock concert; joining was a star-studded musical cast to create an old-time music revue, including Joan Baez, Roger McGuinn, Bob Neuwirth, Ramblin Jack Elliott and Joni Mitchell, each getting a slice of the spotlight before Dylan's headline. Even Allen Ginsburg tagged along to open the show with some poetry!

Another guest that tagged along was filmmaker Howard Alk. He was no stranger to filming Dylan on the road, having also been the cameraman behind Don’t Look Back and Eat The Document. This time there was (in theory) an actual script co-written by Dylan and director Sam Shepard, although live footage of the tour would eventually be juxtaposed in the film. But by “script”, we mean more of a conceptual outline, as Dylan and Shepard would more encourage the actors—band members entourage of the Rolling Thunder Revue—to improvise scenes while on tour.

What exactly were these scenes? Many of the tour members themselves did not know, but simply went along with Dylan because, well, he was Dylan! The ringleader himself was cast as the protagonist Renaldo and his soon-to-be ex-wife Sara Dylan, the sad eyed lady of the Lowlands herself, as Clara. Completing a love triangle was The Woman in White, played by Dylan’s former flame Joan Baez. It is generally assumed that the trio and the surrounding characters were somehow acting out the stories of the songs, or at least the underlying emotions of the songs. Additionally, the songs themselves seemed to create a vague narrative for the trio’s love triangle, based on the song order as presented in the final film. Throughout, Dylan wore whiteface makeup, and sometimes a mask; he insisted the meaning of it was in the lyrics of the songs.

If none of this makes any sense, there was at least one amazing constant: the live performances themselves. Dylan daringly stocked his set with Desire tracks, months before the album was even released. The performances were energetic, intense and intimate, ranging from the proto-punk “Isis” to the gentle “Oh Sister.” Likewise, Dylan and his backing band—dubbed Guam—also presented updated versions of Dylan staples such as “It Ain’t Me Babe” and “A Hard Rain’s a-Gonna Fall” that made his The Band-backed Before The Flood seem like yacht rock. Furthermore, Dylan was mostly free from guitar duties due to the triple guitar attack of Ronson, Burnett and Soles. Urged on by Patti Smith, Dylan used his new-found bodily freedom to act out the lyrics, flailing his arms and motioning his hands as extensions of his lyrical prowess.

After a Fall and Winter of essentially one of the most powerful stage shows Dylan had presented, this first leg of the Rolling Thunder Revue ended at Madison Square Garden on December 8th, and the band earned a rest. Reconvening in April 1976 for a second leg of the tour, Guam had a slight face lift after the exit of Blakley and Rix, replaced by Donna Weiss and Gary Burke, respectively. Likewise, the setlist received a significant face lift as well, drawing more on amped-up and Desire-ified versions of Dylan’s back catalog. While well-intended, this second leg of the Rolling Thunder Revue was dynamic and it was obvious the concept—and band itself—was losing steam. The tour concluded in May, building to a live performance filmed and recorded for an NBC television special and released that September as the ragged live album Hard Rain, both of which were not well-received.

Doing as he would after his 1966 tour, Dylan retired to his home studio to personally edit the footage shot while on tour to try and make a film out of it himself. What Dylan came up with was Renaldo & Clara, a surreal four-hour film: part live concert, part documentary, part improvised drama... understood only by Dylan himself. With a limited release in January 1978, Renaldo & Clara received unanimous negative praise, resulting in the limited release to end after only two weeks. Later that year, Dylan offered a more concise two-hour edit of the film, exorcising much of the ambiguous dramatic vignettes and focusing on the stellar live performances. This did not save the film, as this edit, too, was critically panned and never saw an official release beyond a few broadcasts and theater showings. It seemed that Renaldo & Clara suffered a same fate as 1967’s Eat The Document: an amazing document of Dylan’s live accomplishments, confusingly edited as an experimental film, critically panned and stuffed in the vault, surviving only on bootleg reels and VHS tapes.

But that wasn’t quite the end of Renaldo & Clara; released in 2002 as The Bootleg Series Volume 5: Bob Dylan Live, The Rolling Thunder Revue, a number of the performances featured in Renaldo & Clara eventually saw the light of day. A much more enthralling document of the tour and righting the wrong of Hard Rain, fans ‘desired’ more footage from the first leg of the tour. In 2019, famed director Martin Scorsese reedited the original footage from 1975 into a completely new documentary, Rolling Thunder: A Bob Dylan Story by Martin Scorsese. Finally, fans were able to see remastered and crystal-clear performances from the legendary first leg of The Rolling Thunder Revue, thanks to Scorsese’s curation. But, in true Dylan form, not all in the documentary was what it appeared to be, as several interviewees and narrative events raised numerous eyebrows. To coincide with the film, Dylan released a 14-disc box set containing all six of the professionally-recorded shows on the 1975 tour, two discs of rehearsals and an additional disc of live rarities from the era. But what about the actual presumptive soundtrack to Renaldo & Clara? Can it be salvaged?

Using mostly the mixes found on the Rolling Thunder box set, we are able to easily create a Renaldo & Clara soundtrack. Since the contents of the actual film are an overwhelming mess and honestly a taxing listen, we will limit this soundtrack album to a single-disc of only the featured Dylan performances—essentially, the only reason anyone would want to watch Renaldo & Clara in the first place! We will also sequence the performances in the order in which they were featured in the film and crossfade the performances to create two continuous performances in each side of the record. The resulting album is essentially the very best of the best of Dylan’s live tours, what I believe would have been actually released in 1978 had the film not been canned. When paired with the rougher document of the 1976 leg of the tour, Hard Rain, you have a pretty great document of this era, as there is no song-overlap between the two albums.

Side A opens with the very first performance from the very first concert of the tour: “When I Paint My Masterpiece” from 10/25/75, taken from the bootleg Plymouth Rock, but EQd to match the sound of the version in Wolfgang’s Vault (presumably sourced from the superior master tape). Next is the fantastic “Isis” from 12/4/75; although featured on Masterpieces and recently on Side Tracks, I chose the new mix found on the Rolling Thunder box for coherency purposes. The electric stomp of “A Hard Rain’s a-Gonna Fall” also from 12/4/75 and the exquisite “It Ain’t Me Babe” from 11/20/75 follows, with the 11/21/75 “It Takes a Lot To Laugh” afterwards. The side concludes with “Romance in Durango” from 12/4/75; note that although we are using the mix from the Rolling Thunder box, I have edited out the second-to-last verse in which Dylan made a vocal flub, as it was heard in the actual film and originally released on Masterpieces. Side B starts with “One More Cup of Coffee”, “Sara” and “Never Let Me Go”, all from 12/4/75. Dylan’s superbly intimate “Tangled Up in Blue” from 11/21/75 is next, with the album ending with a pair of tracks from 11/20/75, “Just Like a Woman” and “Knockin on Heaven’s Door.”

Posted by soniclovenoize at 10:46 AM