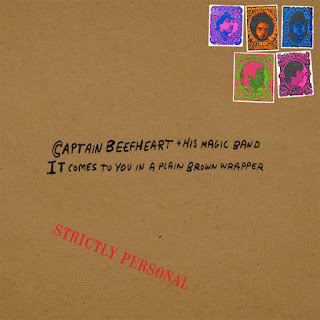 Captain Beefheart and His Magic Band –

It Comes To You In a Plain Brown Wrapper

Side B:
3. Korn Ring Finger
4. Tarotplane


Happy May Day! To celebrate, here’s a long-overdue upgrade to one of my favorite albums that never were. This is a reconstruction of the unreleased 1968 double-album It Comes to You in a Plain Brown Wrapper by Captain Beefheart and His Magic Band. Originally scrapped with half of the material re-recorded and infamously “psychedelicized” for the album Strictly Personal with the other half released as 1972’s Mirror Man, this reconstruction attempts to cull all the originally intended material for the double album that was supposed to be their sophomore release, more successfully bridging the gap between 1967’s Safe As Milk and 1969’s Trout Mask Replica. This upgraded version attempts to follow drummer John “Drumbo” French’s recollections of what Captain Beefheart actually intended with the album, organizing the composed material on Disc One and the improvised material on Disc Two. I have created unique edits of the improvised material in order to fit on a theoretical vinyl record, and have edited the composed songs in Disc One as per French’s notes on how they should have ended. Additionally, I have synced the isolated vocal from the Strictly Personal version of “On Tomorrow” with the instrumental Plain Brown Wrapper version, creating a 'finished' recording.

After a prominent rise of notoriety upon the release of Captain Beefheart & His Magic Band’s psychedelic-blues debut Safe As Milk in 1967, the group stood at a crossroads of how to proceed: continue being a cutting edge cult act or expanding their horizons? After a disastrous warm-up performance for their scheduled 1967 Monterey Pop Festival, it seemed that breakthrough success would elude the riotous bunch. To make matters worse, Don Van Vliet’s band had been damaged by lineup changes due to members who had had enough of The Captain’s drug hallucinations, erratic behavior and alleged emotional abuse. Prodigal guitarist Ry Cooder vacated to be replaced briefly by Gerry McGee, who was in turn replaced by Jeff Cotton.

Despite the troubled waters, Vliet reunited with a Magic Band that consisted of Cotton, Alex St. Clair Snouffer, Jerry Handley and John French in the November of 1967 to record their follow-up to Safe As Milk at TTG Studios in Los Angels. The band had spent months writing and rehearsing new material, which they tackled in the studio: “Safe as Milk”, “Trust Us”, “On Tomorrow”, “Beatle Bones n’ Smokin’ Stones”, “Gimme Dat Harp Boy”, “Kandy Korn”, “Big Black Baby Shoes”, “Flower Pot”, “Dirty Blue Gene” and “Moody Liz”. The new material was more intricate and abstract as compared to the Blues-based Safe as Milk, yet often retaining a melodic sensibility for the possibility of mainstream airplay; “Trust Us” was specifically earmarked for the lead single for the new record.

But expectations were even higher than this impressive collection of songs, as Vliet intended their sophomore album to be a conceptual double-record: The first disc would contain the aforementioned “composed” works, and be credited to Captain Beefheart and His Magic Band; a second disc of improvisational jams would constitute the second disc, credited to their alter-egos the Twenty-Fifth Century Quakers, who were essentially “opening” for Captain Beefheart and The Magic Band. The album was to be called It Comes To You In A Plain Brown Wrapper, in reference to an ambiguous parcel containing either narcotics, drug paraphernalia or possibly pornography. The cover art was to feature exactly that as well, a plain brown wrapper marked ‘strictly personal’, with both records addressed from one band to the other. There was even a photo shoot with the band dressed as Quakers!

Producer Robert Krasnow ran tape as the Captain and His Magic Band soldered through a number of live improvisations-- “Taroplane”, “25th Century Quaker”, “Mirror Man” and “Korn Ring Finger” – which Drumbo French thought were disorganized due to Vliet being unable to conduct the unprepared band properly, as he was contained in a vocal booth. After tracking more than a double album’s worth of material in total, the sessions were paused for a European tour, leaving only six of the ten composed songs with vocals. The band never returned to the TTG Session recordings, forever leaving these tracks unfinished. No reason was ever given for the session’s halt, but it has been suggested that their label Buddha Records had pulled the plug out of disinterest. Interestingly enough, due to Buddha Records misfiling of the band’s contract, Captain Beefheart and company were free to sign to a different label by the Spring of 1968. The very next day, Krasnow and the band entered Sunset Sound Studios to rerecord a single-LP version of the album on Krasnow’s own Blue Thump label.

Recorded in April and May of 1968, Don & his crew recut the more ”commercial” tracks from the November 1967 sessions at a much more abbreviated length: “Safe as Milk”, “Trust Us”, “Mirror Man” (cut from the original 15 minutes down to 5!), “On Tomorrow”, “Beatle Bones ‘n; Smokin’ Stones, “Gimme Dat Harp Boy” and “Kandy Korn”, as well as a new improvisation called "Ah Feel Like Ahcid." In a move that angered Beefheart fans for ages, Krasnow allegedly took the liberty himself to overdub numerous faux-psychedelic effects onto the newly-recorded album, even completely burying the mixes under unlistenable phasing. The resulting released album—Strictly Personal—was a commercial disaster and The Captain disowned the album, claiming the effects were added without his permission. Some speculate that was untrue and Vliet had given his approval only to later turn on the album after its failure. Either way, this folly of questionable truth is just simply a part of the Captain Beefheart mythos-- as was everything else!

After the critical success of the seminal experimental and Frank Zappa-produced rock album Trout Mask Replica (not to mention its respectable follow-up Lick My Decals Off Baby), Buddha Records wished to capitalize on Captain Beefheart’s renewed cult status and artistic credibility. Going back to the original November 1967 Plain Brown Wrapper tapes, they compiled a single-disc of material, primarily focusing on the extended live improvisations. 1971’s Mirror Man included “Tarotplane”, “Kandy Korn”, “25th Century Quaker” and “Mirror Man” and showed the world (or at least the few who were listening) what Strictly Personal was supposed to sound like, to some extent. But wasn't without its own short comings: not only was it merely half of the original Plain Brown Wrapper album, but it featured anachronistic cover art, improper musician credits and Buddha falsely claimed the album was recorded in one night in 1965!

Beyond the Mirror Man LP, the TTG Sessions remained unheard, although “Big Black Baby Shoes” was rerecorded as “Ice Rose” for 1978’s Shiny Beast and “Dirty Blue Gene” was rerecorded for Doc At The Radar Station in 1980. Years passed before fans were able to piece together the actual Plain Brown Wrapper album, beginning with questionably-legal British import I May Be Hungry But I Ain’t Weird in 1992. Suffering from the same fate as other early Captain Beefheart CD reissues of poor mastering and use of inferior mastertapes, it wasn’t until 1999 when Buddha Records released The Mirror Man Sessions, essentially a properly-mastered Mirror Man with five outtakes from the Plain Brown Wrapper sessions included as bonus tracks; seven more TTG outtakes were included as bonus tracks on the 1999 remaster of Safe As Milk. Finally, Sundazed Records collected all the non-Mirror Man outtakes and one more additional track in their own vinyl-only 2008 reconstruction of It Comes To You in a Plain Brown Wrapper (which made no attempt to literally reconstruct the lost album).

While all the pieces are now available to recreate It Comes to You in a Plain Brown Wrapper, we still have the task to wrap it all up as one. While my previous reconstruction featured a mix of the composed and improvised selections evenly spread across the four theoretical LP sides, here we will follow what drummer John French has said he believed the album would have been structured, according to conversations he’d had with The Captain himself! This will include making my own unique edits of the four improvisational pieces (“Mirror Man”, “25th Century Quaker”, “Korn Ring Finger” and “Tarotplane”) so that they will fit on a 40-minute vinyl record. The remaining songs will be sequenced as French suggested (beginning with “Safe as Milk" and ending with “Kandy Korn”), using the songs’ officially-released versions as a template of when the tracks should end (as most of the TTG Sessions simply did not have proper endings), as well as French’s own comments about when songs should have ended. Finally, Side B will be structured to emulate the Side B of Strictly Personal, just for fun!

Posted by soniclovenoize at 3:08 PM