The Beatles - Between The Lines 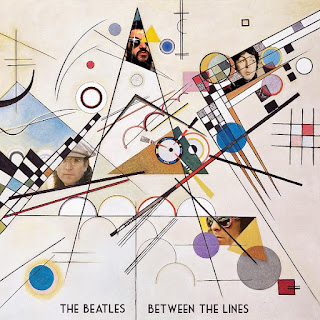 The Beatles - Between The Lines

Hey folks.  Sorry about my absence…  A mix of being busy at work, a break-up, depression, etc etc etc.  I’ll try to “get back up on the horse” and drop some soniclovenoize reconstructions and reimaginings, starting with one that I think will be fairly unexpected and possibly exciting
for some (and loathed by others!).  I know long ago I said I would never do this, but during the pandemic (I had assembled this in November 2020, actually) I buckled down and made some Albums That Never Were I never expected to!  And you know what?  I actually really liked this one!

If you couldn’t figure it out by the tracklist, this is an album “re-imagining” that postulates “What if The Beatles never broke up?” and is a part of my previous series of similar albums, including Instant Karma!, Imagine Clouds Dripping, Living In The Material World, Band On The Run, Goodnight Vienna and Skywriting By Word of Mouth.  This theoretical album– called Between The Lines (the tentative title of Lennon’s follow-up to Rock and Roll that was scrapped after being domesticated in 1975)-- encompasses The Beatles solo material spanning 1975 and 1976, and would have been theoretically released in fall 1976.

As with my previous Beatles 70s Albums, I will adhere to three rules, although there are some slight modifications for these albums that follow Lennon’s real-life domestication and retirement:
1)  One album is represented per year, culled from tracks each Beatle recorded that year; this rule is revised so that one album spans two years instead of one.  Not only will this accommodate a lack of new material from some of the Beatles during this time, it will also force the outcome to be of better quality.
2)  Generally speaking, to include five Lennon songs, five McCartney songs, three Harrison songs and one Ringo song; this rule is revised to presume that Lennon largely retired from The Beatles, occasionally contributing as a studio musician but leaving most of the heavy lifting for
Paul and George.
3)  The chosen songs must be Beatle-esque in nature; we will attempt to avoid the idiosyncratic musical tangents each Beatle pursued in the 70s and vie for the solo songs that would have been most likely recorded by The Beatles (i.e. not vetoed by the rest of the band).
4)  The songs must flow together and make a unified album that shares a specific tone.

Between The Lines collects the highlights from Paul’s Wings at the Speed of Sound, George’s Thirty-Three and a Third, Ringo’s Rotogravure and, well, the six solo Lennon demos that date from his early Dakota era, approximately simultaneous to the aforementioned albums.  Both sides of the  re-imagining are edited to be two continuous sides of music.  The cover is taken from a Miro painting that somehow evokes the feel of this curious little album.

Side A begins with my own unique edit of “Let ‘Em In”, which replicates the very rare original radio edit, only released as a promo disc; this is significant because that is the version I grew up listening to on the radio, and it is otherwise lost to time–and the unnecessarily long and repetitive album version.  This is followed by George’s classic “Crackerbox Palace”, which seems to somehow fit seamlessly before “Silly Love Songs”; like “Let ‘Em In”, this is my own unique ‘single edit’ since the song is likewise unnecessarily long.  Next is Ringo’s token song, written by John, “Cookin’ In The Kitchen of Love”, with the side closing with Paul’s ballad “Warm and Beautiful.”   Side B begins with George’s “See Yourself”, followed by Paul’s “San Ferry Anne”.  Next is a massive Paul-esque medley of George’s “Beautiful Girl” and Paul’s “Beware My Love”, using a brief bit of George’s “Dear One” to bridge the songs.  I couldn’t not have a John song, so concluding is the voice of our old friend: my own custom edit of “Tennessee”; although a Lennon home demo would sound drastically different from Paul & George ‘s studio output at this time, I believe this song works here as a closing piano solo.

So sit back and imagine, if you will, an alternate timeline…
Although The Beatles went on an indefinite hiatus following the short 1974 tour for their hit album Goodnight Vienna, all four remained friendly, although not musically active with each other.  Paul took the opportunity to perform a solo tour (featuring wife Linda and his old friend Denny Lane as accompaniment) playing stripped down selections of his Beatles favorites from the last fifteen years.  George released a solo album Extra Texture, which had a lukewarm response despite featuring a moderate hit “You” (a duet with Ronnie Spector of The Ronnettes).  Ringo continued acting, building his filmography to include the role as The Pope in Listztomania, the voice of God in Monty Python and The Holy Grail and Uncle Ernie in the film adaptation of The Who’s Tommy.  John chose to stay home with his wife Yoko Ono and newborn Sean.  But the release of The Beatles’ Live at Madison Square Garden in late 1975 renewed some interest in the group continuing as a studio band, much like their late-60s era.

Gradually, three of the four Beatles found themselves in each other's periphery and began plotting a new album, to be begun in early 1976.  John was only able to casually commit to the album, as he was no longer interested in living the rock star life.  While making only scant appearances on rhythm guitar and some backing vocals (although he distinctly took the lead for Ringo’s contribution to the album), a question emerged in the fans’ collective mind: is it really a Beatles album without John?  Regardless, a Paul-and-George -driven quartet released Between The Lines in October 1976, promoted only with a handful of live television  performances.  Most notable was their performance of “Let ‘Em In” on Saturday Night Live, in which Chevy Chase guested on a marching-band snare, prompting John Lennon to lead the entire show’s cast in a march outside and around Rockefeller Plaza.

The moderate success of the double A-side single of “Silly Love Songs” and “Crackerbox Palace” encouraged the group to plan a follow-up in this short-lived and strange era of the band, and broad talks were made to reconvene in a year or so to see what the trio (and hopefully quartet) could muster…

Posted by soniclovenoize at 9:56 AM

Email ThisBlogThis!Share to TwitterShare to FacebookShare to Pinterest
Labels: 1975, 1976, beatles