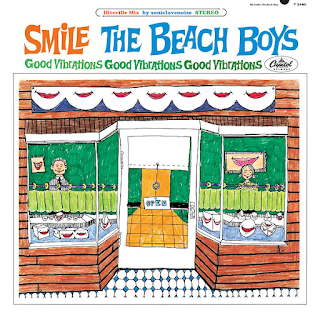 4.  Heroes and Villains Part I

11. Child is Father of The Man

Need something to be thankful about this Thanksgiving?  How about a new SMiLE?

I have gotten many requests for an update to my SMiLE mix lately… and while I don’t necessarily see any pressing need to upgrade my previous SMiLE reconstructions (as yes, I do stand by my ‘67 reconstruction!), I thought it would be a fun challenge to make a completely different SMiLE mix!  I call this the “Hitsville Mix” (named after a Brian Wilson ad lib while recording “Heroes and Villains”) and it is unassociated with my previous mixes.  It is a completely different mix and ideally, a different SMiLE listening experience, intending to be more unpredictable and bizarre, much like the actual Smiley Smile album.  Here, I am using ALL NEW stereo mixes I’ve made over the last few months, except “Good Vibrations”, which is the brand new 2022 official stereo extraction mix, which sounds the best it ever has!

What is the theme/concept of the Hitsville Mix of SMiLE?  I gave myself a few guidelines:

1)  Unlike my previous “1967” mix, I am not beholden to strict “historical accuracy” or the theoretical artistic intent of Brian Wilson.  This is the mix that I wanted to make, rather than the mix I presumed Brian Wilson wanted to make.

2)  ALL STEREO.  This requires, as aforementioned, new stereo mixes to be made for all songs, except “Our Prayer” and “Good Vibrations”, whose official stereo mixes are just fine.

3)  As a challenge, I chose to limit myself to using the handwritten “Capitol Trackllist” as submitted to Capitol Records in January 1967 and subsequently printed on the reverse cover slicks.  The majority of SMiLErs discard this track sequence for various reasons and create their own track sequence–often based upon either Dominic Priore’s suggested tracklist in Look! Listen! Vibrate Smile! or Darian Sahanaja’s tracklist on Brian Wilson Presents SMiLE.  Here, we will try to make sense out of the long-derided track order.

The end result of my Hitsville Mix is exactly how I hoped: it is a little more bonkers and less logical than my previous reconstructions, and keeps the vibe of Smiley Smile, albeit more hi-fi.  Songs are allowed to be fragments and don’t necessarily go anywhere; the listener is thrown curve-balls and the trajectory of the album is fairly unexpected; Side B is specifically bizarre but ends with a wow!

Side A begins like any other mix–with “Our Prayer”, the stereo mix from Made in California as an unlisted introduction to the album.  This is hard edited into a new stereo mix of “Do You Like Worms”, which uses the tracking sessions from The Smile Sessions as a base, with isolated vocals from the Smile Vocal Montage, Unsurpassed Masters 17 and the (lousy) 2022 stereo mix from Sounds of Summer.  Following is “Wind Chimes”, here ignoring the stereo Made in California mix and instead presented as a similar structure as Brian’s 1966 test edit, using a pitch-corrected backing track taken from The Smile Sessions, with vocals taken from The Smile Vocal Montage and Unsurpassed Masters 16.

The project’s flagship song “Heroes and Villains” follows, which is a completely stereo version of the classic “Cantina Mix”, including the Verse and Three-Score-Five sections!  But instead, after Whistling Bridge there is a cut to Bridge To Indians and Prelude To Fade to create an ending (since I am using the proper Fade to end the actual album).  Next is my attempt to create the theoretical “Part II” of “Heroes and Villains”, that would have been found on its 7” single (or combined to the legendary six-minute “Heroes and Villains”, if you are so inclined).  Using the Gee and Part 2 iterations as a base combined with excerpts from the Brian Wilson led psychedelic sounds, mock interviews and experimental raps, we are able to create a faux Vaudeville variety act!  What I am intending is that the listener can imagine The Beach Boys as a psychedelic barbershop quartet who are literally framing a series of comedy sketches, all onstage and concluding with a laughing audience!

One gripe SMiLErs have with the Capitol Tracklist is the placement of “Surf’s Up” in the middle of Side A; while strange, we will embrace it and own it, as a song about a maestro artist on-stage literally follows an on-stage performance!  Here is a brand new stereo mix I’ve created using the tracking sessions from The Smile Sessions as a base, combined with the isolated vocals from the Feel Flows boxset.  Here, I’ve chosen to use Carl’s lead vocal instead of Brian’s, which seemed more appropriate with the song’s placement on the album.  Following is the fantastic 2022 stereo extraction mix of “Good Vibrations” from Sounds of Summer.

Side B begins with a new, improved stereo mix of “Cabin Essence”, using the backing tracks from The Smile Sessions, combined with the extracted vocal from 20/20 and The Smile Vocal Montage.  Next is a brand new stereo mix of “Wonderful”, with a more defined soundstage, sourced from the Good Vibrations box set and The Smile Vocal Montage.  Using the Insert as a segue, we can modulate up to “I’m In Great Shape”, which combines the backing track from The Smile Sessions and the vocal from the Humble Harve demo, hard edited onto a stereo “I Wanna Be Around”; this follows the BWPS structure, which was how I always envisioned the song being constructed.

Next is a new stereo mix of “Child is Father of the Man”, using a structure that best fits this album’s track sequence, rather than any version that Brian Wilson specifically designed.  Next is an edit I am fairly proud of–a completely new version of “The Elements”, again made to fit this album sequence, rather than any historical accuracy.  It begins with the Earth section, represented by a brand new stereo mix of “Barnyard”; then it is overlapped with the Wind section, represented by the alternate Whispering Winds from Sunshine Tomorrow; Fire is next represented by “Mrs O’Leary’s Cow”, proper, without any Chimes or Heroes and Villains Intros which is otherwise common; concluding is the Water section, represented by the alternate Water Chant from Sunshine Tomorrow.

The concept of this new mix of “Vege-Tables” is to make an all-stereo version of a specific edit of “Vege-Tables” I made 20 years ago, which mainly constituted Brian’s mono mixdowns from Unsurpassed Masters 17 and Mark Linett’s mix on the Good Vibrations boxset.  Thus, using the stereo mix from Made in California, tracking sessions from The Smile Sessions and vocals from The Smile Vocal Montage and Unsurpassed Masters 17, we are able to have both the extended reverb at the end of the first two verses, as well as the unique crossfade between the Do A Lot chorus and the Fade, now in true stereo!  The Hitsville Mix of SMiLE ends with a big send-off: “The Old Master Painter”, featuring a brand new (and more accurate!) stereo sync.  Note that the Barnshine Fade is used here to end the track as originally intended before it was gutted for the Cantina mix of “Heroes and Villains”, giving this SMiLE and joyous finale.

Posted by soniclovenoize at 8:18 PM