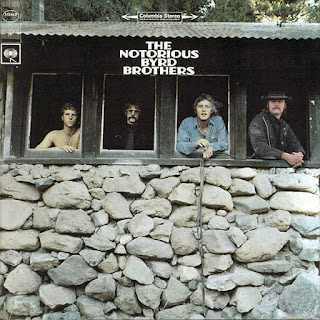 The Byrds - The Notorious Byrd Brothers

In honor of the passing of the great David Crosby, I offer this album reimagining: an alternate version of The Byrds’ classic psychedelic rock masterpiece The Notorious Byrd Brothers, which presumes David Crosby had not left the band, and is featured as an equal to Roger McGuinn.  To do this, we will restructure the album to feature recordings made during the early sessions of the album, which actually featured Crosby.

By 1967, the tumultuous relationship between The Byrds frontman Roger McGuinn and guitarist David Crosby had escalated to the boiling point.  From an early career of jangly Dylan covers, to their groundbreaking embrace of psychedelic and raga rock, The Byrds were always attempting to push new ground.  Unfortunately, there was disagreement about which ground to break.

Coming into his own manhood of a songwriter, Crosby was fighting for his songs to be heard through McGuinn’s, and especially took a heavy hand in their first single of the year, his own “Lady Friend”, recorded in April.  In contrast, McGuinn & bassist Chris Hillman’s “Old John Robertson”, the b-side recorded the following month, showed the pair’s desire for a more Country-influenced sound that would emerge the following year.  Despite “Lady Friend”’s grandiose quality, the single was a relative flop as compared to their previous hits, with Crosby taking a hit to the ego and the band soldering on with a song already scratched from the theoretical running order of an album in the works.  Sessions resumed briefly in July with Crosby’s serene “Draft Morning”, but after sessions of percussive tension, drummer Michael Clarke was dismissed from the band.

Regrouping in August with session drummers Jim Gordon and Hal Blaine alternatingly replacing Clarke, the group recorded Crosby’s hippy anthem “Tribal Gathering”, as well as McGuinn & Hillman’s poppy “Dolphin’s Smile”.  But more inter-band stryfe reared its head when the group was offered “Triad”, a song about a throuple from the free-loving lady’s man Crosby.  Although recorded by the group, McGuinn took offense to the song’s subject matter and ultimately rejected it, leaving the song to later be recorded by Jefferson Airplane the following year.  After recording the McGuinn/Hillman’s “Change is Now”, the final straw was drawn as McGuinn insisted on recording the Goffin/King ballad “Goin’ Home” in September.  Crosby felt the song was meaningless filler, especially when compared to the majestic psychedelic rock the band had been recording the year thus far, as well as questioning why a band with three songwriters would bother recording a cover.  Crosby was finally cut from the band, and McGuinn became the defacto leader of the band.

Regrouping in October with previously exiled backing vocalist Gene Clark, the fragmented band recorded “Goin’ Back”, as well as the experimental “Space Odyssey” influenced by Science Fiction writer Aurther C Clarke.  This was short lived, as Clark was once again asked to leave the band, and sessions continued in October with guitarist Clarence White, the newly remade Byrds recording “Bound To Fall”, “Moog Raga”, “Get To You”, “Flight 713”, “Natural Harmony”, “Wasn't Born To Follow” and “Artificial Energy”.

Released in January 1968, The Notorious Byrd Brothers was released to critical acclaim and over time, became the band’s crowning achievement.   As for David Crosby, he had no time for feelings of resentment.  Soon after, Crosby started jamming with friend Stephens Stills of Buffalo Springfield and Graham Nash of The Hollies, and the trio formed the legendary supergroup Cosby, Stills & Nash.  But could The Notorious Byrd Brothers have been, well, less notorious and more harmonious?

If we are going to create a Notorious Byrd Brothers album that would theoretically contain an active (and even leading) David Crosby, then we’ll need to almost exclusively use the material recorded before Crosby's exit.  There is not a lot of material–just enough to make an album–but luckily Byrds albums were historically short: eleven songs, running about 30 minutes.  All sources are taken from the 2011 remaster of The Notorious Byrd Brothers, as well as using some of the bonus tracks on the 2011 remaster of Young Than Yesterday.  All songs will be crossfaded together into two continuous sides of music.

Side A begins with the most upbeat and staggering song of the bunch, “Old John Robertson”, using the very psychedelic mix found on the Notorious Byrd Brothers album, rather than it’s original single mix.  Next we restore “Triad” to its rightful place, here with some gentle volume adjustments in the verses; we are putting the song front and center, as Crosby is getting the attention he deserves.  This is then crossfaded in “Dolphin’s Smile” and “Change is Now”.  The side closes with “Draft Morning”-- which features one of my favorite 1960s artists, The Firesign Theatre!--followed by the outtake instrumental improvisation “Universal Mind Decoder”.

Side B begins with Crosby’s glorious “Lady Friend” which melds into the admittedly low-hanging fruit “Don’t Make Waves”, included here as it was recorded during the “Lady Friend” sessions.  The jaunty “Tribal Gathering” follows, tallying five songs lead by David Crosby!  Closing the album an outtake version of “Goin’ Home” which does feature David Crosby on guitar, recorded before his departure, followed by a song recorded just after departure, “Space Odyssey”, as it was needed to fill out the album; a piece of “Moog Raga” is used as an outro to the album.

Posted by soniclovenoize at 7:44 PM