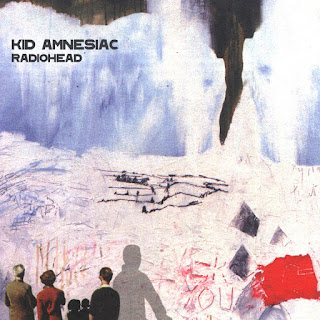 In light of recent events with the coronavirus, it seems I have a lot of spare time as I dwindle in my self-imposed quarantine; I assume you all need something new to listen to during yours.  So during this crisis, I will try to upload a new album reconstruction or reimagining every week until it’s safe to go outside again.  We will get through this together and hopefully these album reconstructions and reimagings will be just another little thing to help during our social distancing to stop the spread of COVID-19.

Starting with the perfect soundtrack to social distancing… is Radiohead!  This is a reimagining of Radiohead’s 2000 album Kid A and 2001 album Amnesiac as a singular album.  Recorded during the same recording sessions between 1999-2000 and resulting in a double-album’s worth of original material, the band chose to instead release two separate albums from the sessions instead of releasing a singular or double-album release.  Since then, many fans have wondered how a singular album, using “the best” from both Kid A and Amnesiac, would sound and many fans have constructed their own playlists.  For my own reconstruction, we will use the specific eleven songs Radiohead debuted in concert during their Summer 2000 tour after the completion of the sessions, but before Kid A was released.  In theory, this could represent Radiohead’s intent of a singular album sourced from the entirety of the sessions.  Furthermore, the songs will be sequenced in a similar fashion to the order of which the songs were actually performed during that tour, with my own unique edits and crossfades used to make the sequence flow.

After their majestic 1995 album The Bends and awe-inspiring 1997 album OK Computer, Radiohead was literally the biggest rock band in the world.  Unwittingly hailed has the modern successor to Pink Floyd in their fusion of art-rock, pop, mastery of atmosphere, creative instrumentation and their ability to connect to the audience, Radiohead’s every move was compulsively under watch by the music media and obsessive fans hungry for any second of new Radiohead music.  No strangers to road-testing new material, the band began composing new songs for OK Computer’s follow-up, arranging them during soundchecks for the OK Computer tour in the summer of 1997.  Songs such as “Life in a Glasshouse”, “How To Disappear Completely”, “Follow Me Around” and “Nude” were woodshedded during the OK Computer tour throughout 1997 and 1998, and were captured on film for Grant Gee’s documentary on Radiohead’s world tour, Meeting People Is Easy.

Upon the conclusion of the OK Computer Tour in April 1998, Radiohead took a much needed rest, while front man Thom Yorke attempted to write new songs for the album’s follow-up.  This was not an easy task, as Yorke faced two challenges...  Firstly, Yorke had grown tired of the band’s sonic signature, feeling that Radiohead had become Alt Rock trend-setters after the sudden emergence of a number of “copy-cat” bands that sounded very similar to Radiohead.  The only way to keep themselves ahead of the curve and to challenge themselves artistically was an intentional and radical departure from Radiohead’s established sound.  Unfortunately, Yorke’s second challenge was a bad case of writer’s block, leaving Yorke with only unfinished song sketches by the time the band reconvened in January 1999, instead focusing on rhythm, influenced by the artists of Warp Records

Formal rehearsals and recordings begin at Studio Guillaume Tell in Paris with producer Nigel Godrich, with EMI Records allowing Radiohead complete artistic freedom and no deadline to finish the album.  While it was fortunate the rest of the band shared Yorke’s desire to drastically change their musical direction, this also allowed for an extended period of musical soul-searching, for better or for worse.  Although the song “In Limbo” was completed at this time, the majority of the sessions proved unproductive and the band relocated to Copenhagen’s Medley Studios in March 1999.  Influenced by Krautrock legends Can, Radiohead experimented with hypnotic jam sessions which were later edited into a song structure, resulting in the basis of the song “Dollars and Cents”.  Otherwise, the sessions were again deemed unproductive, with the entire band second-guessing their working methods of playing live, together in a room, as a standard rock band.

Once again relocating in April to a mansion fitted with recording gear in Gloucester called Batsford House, the band chipped away at several small musical breakthroughs.  In order to reinvent themselves as a musical entity, each member had to reevaluate their roles in the band as not necessarily playing their chosen instruments specifically, but contributing sounds or ideas to York’s experiments.  This was exemplified in “Everything In Its Right Place”, which simply revolved around the chords played on a Prophet-5 synthesizer and Yorke’s vocal being digitally “scrubbed” by Godrich.  Additionally, the band made progress adding sound elements to an unfinished backing track, originally recorded in November 1997 during a b-side session: “The National Anthem”, based on a bass riff Yorke wrote when he was 16!

After picking up some much needed momentum, Radiohead relocated once again in July to their own Oxford recording studio Canned Applause, which would remain their home base for the remainder of the recording sessions, sporadically detailed by guitarist Ed O’Brien’s daily journal posted to Radiohead’s website.  Sessions dragged on throughout the remainder of 1999 with a number of ideas attempted and abandoned, rearranged and discarded.  After successfully tracking several more ‘live band’ songs such as “Optimistic”, “You and Whose Army?” and “Pyramid Song”, Radiohead once again hit a creative wall with Yorke’s desire to move beyond the sound of a rock band.  By January 2000, Goodrich made a bold suggestion: all five members of the band abandon their acoustic instruments for all digital instruments, synths and programs, forcing Radiohead to completely rethink arrangements.  This reinvigorated the band, allowing them to create new, experimental compositions such as “Kid A” and “Idioteque”.  Sessions carried on into the spring, with “Knives Out” being completed in March after a year of work!  The album was finally finished in April 2000 with over 20 completed song, enough material for a double album.

To road-test the new material, Radiohead played a brief summer tour in June and July, performing eleven of the new songs: “Optimistic”, “Morning Bell”, “Dollars and Cents”, “The National Anthem”, “In Limbo”, “Everything In Its Right Place”, “Knives Out”, “How To Disappear Completely”, “Pyramid Song”, “Kid A”, and “You and Whose Army?”.  Yorke additionally performed “I Might be Wrong” and “Fog” acoustically during encores, although only once each.  Predictably, Radiohead fans clamored to hear the mysterious new material, and bootlegs of their live recordings were traded on file sharing networks.

Finally, Radiohead’s culmination of the 18-month long sessions was released in October: Kid A, a singular, concise album of ten songs, that only occasionally featured the Radiohead fans had grown to love.  Although “Optimistic” and “How To Disappear Completely” seemed to be ‘classic Radiohead’, other songs seemed far-removed from their intelligent anthem rock.  The album often seemed cold and distant, sometimes clinical.  And the album lacked some of the fans’ favorites that had already been debuted live several months before: “Dollars and Cents”, “You and Whose Army?”, “Knives Out” and “Pyramid Song.”  Regardless, Kid A was a successful artistic statement, perfect in its execution as a singular, cohesive album.  Although some-old school Radiohead fans were turned off by it, many more were turned on, accepting the band’s radical departure and willing to go along with Radiohead’s ride.  Kid A became one of the more influential and groundbreaking modern ‘rock’ albums, signaling the start of popular music in the twenty first century.

But what about the remainder of the music Radiohead recorded throughout the Kid A sessions, which did not seem to fit within its artistic vision?  As Radiohead began touring to promote Kid A, they indeed continued to perform those ‘lost Kid A songs’, much to fans’ delight, with “Knives Out” and “Pyramid Song” specifically being fan favorites.  After suggesting a series of EPs to release the material, Radiohead instead assembled a second album for a June 2001 release, entitled Amnesiac.  It included not only the four aforementioned fan-favorite ‘lost Kid A songs’, but an additional seven that spanned from the highly experimental “Pulk/Pull Revolving Doors” to the jazzy paranoia of “Life in a Glasshouse”, a song fans have been crying for since originally witnessed in the Meeting People is Easy documentary.  Despite this, Radiohead insisted that Amnesiac was not a Kid A outtakes album, but a separate album in its own right.  While not as much as a critical success as Kid A, it was as much a cherished album among Radiohead fans, with many often debating which album was better.  There were also a set of fans who wondered “What if the sessions amounted to one album with the best of Kid A and Amnesiac, rather than two separate albums?”

The answer to this question varied wildly from one fan to another depending on their tastes, as clearly Radiohead have never given any official word what an album of that caliber would have sounded like.  For this reimagining, we will simply assume Radiohead did give an official word of what songs would have made the cut for a singular album from these sessions: those eleven songs initially performed after the sessions concluded but before Kid A was sequenced and released.  Additionally, we will attempt to sequence our album similarly to the general order in which the songs were performed.  Although that varied from show to show, we can observe general trends in set order and attempt to replicate it.  We are also excluding “I Might Be Wrong” and “Fog” as they seemed to be one-off performances.

Focusing solely on the Kid A-era songs, Radiohead always opened with “Optimistic”, followed by “Morning Bell”; here I created a new segue between the two songs.  Earlier in the tour, they would then follow with “How To Disappear Completely”, although it was moved to the end of the set later in the tour; here we will retain its initial position.  Next they always followed with “The National Anthem”, often itself followed by “In Limbo.”  This five-song sequence was most often played in the first half of the tour (with occasional minor variations), and becomes our Side A to this album reimagining.

Most often, “Dollars and Cents” was the mid-point song that followed “In Limbo”, so we will use that to begin our theoretical Side B.  From here on, there is no real pattern to follow, as every date had a different song to follow “Dollars and Cents”.  For the sake of flow and album continuity, I am choosing “Kid A”, “Knives Out” and “You and Whose Army” to follow in that order, as well as for a reason that will be explained later.  Nearing the end, Radiohead almost always closed their main set with “Everything In Its Right Place” and often performed “Pyramid Song” in their encore; my album reimagining concludes the same way.

The resulting album is less experimental than either Kid A or Amnesiac and seems to be a solid middle ground for the Radiohead fans craving an artistic reinvention and the fans who wanted more of the moody anthems of OK Computer.  It's beginning with "Optimistic" encourages the faithful listener, rather than challenging them with "Everything In Its Right Place" and "Kid A" immediately!  Also, this track sequence seems to follow a specific narrative—especially Side B—although I’ll allow you to interpret it however you wish.  My Kid Amnesiac is best experienced as its own entity, and I urge you to listen without the knowledge of Kid A nor Amnesiac; imagine you are first hearing it after only listening to The Bends and OK Computer for context.  And with that, everything is in its right place.

Posted by soniclovenoize at 10:00 AM