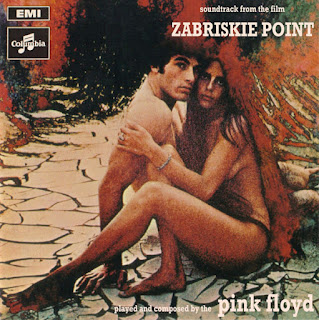 
Long time/no post!  Here is a long-threatened update to one of my favorite reconstructions, the unreleased 1970 Pink Floyd soundtrack to the film Zabriskie Point.  A specific cycle of music written for the film and allegedly intended as the band's own release, the film’s director Michelangelo Antonioni scrapped most of Pink Floyd’s work in favor of a collection of songs also featuring Grateful Dead, Kaleidoscope and The Youngbloods.  With only three of the band’s intended songs making the cut, the rest trickled out over the years on bootlegs, remaster bonus discs and box sets.  This reconstruction attempts to collect the final takes of the primary compositions for the film and presents it in a cohesive, all-Pink Floyd collection, akin to More and Obscured By Clouds.  Many tracks feature my own unique edits and have all been volume adjusted for coherency.


Upgrades to this March 2020 edition are:

1969 was a hit and miss year for Pink Floyd.  Obviously searching for a signature sound beyond Syd Barrett’s psychedelic pop, the band spent the year touring and composing conceptual sound experiments, including the live presentation The Man and The Journey (which was also reconstructed on this blog).  Some of this music appeared on the soundtrack to the film More, a collection of pieces Pink Floyd recorded specifically for the Barbet Schroeder film, released in August.  A few other Man and The Journey tracks appeared on the band’s own release Ummagumma in November, a double LP that featured solo studio recordings from each individual member of Pink Floyd and a live disc which featured fantastic recordings from that spring, including a dynamic version of their 1968 b-side, “Careful With That Axe, Eugene”.


It was that specific b-side which spurred on Pink Floyd’s creation of their next studio soundtrack project, recorded the very month of Ummagumma’s release.  Director Michelangelo Antonioni was so moved by “Careful With That Axe, Eugene”, he requested not only for Pink Floyd to record a new version of it for his upcoming film Zabriskie Point, but to score it’s entirety!  The band gathered into International Recording Studio in Roma in November 1969 to compose and record music specifically for the film, with more work in December at Abbey Road.   In the end, Pink Floyd recorded original music for seven different scenes throughout those two months:

The opening credits featured an experimental piece called “Heart Beat, Pig Meat”, which was sometimes performed within The Man and The Journey as "Doing It!" throughout 1969.  Driven by a heartbeat-like loop of a microphone tap, Richard Wright’s meandering organ and dialog sound samples from the film and elsewhere, the song opened the officially released soundtrack.

Pink Floyd recorded several variations of a song called “Country Song”, meant for the scene in which protagonist Daria is driving and looking at a map.  While it was one of the only two songs of the cycle with actual lyrics, they also recorded several shorter, instrumental versions, including “Auto Scene 2”, “Auto Scene 3” and “Looking At Map”. Despite being a solid song that could have been a highlight on Atom Heart Mother, "Country Song" didn't make the cut and Antonioni instead used “Brother Mary” by Kaleidoscope for the scene.

Wright composed a beautiful piano piece for the riot scene, which the band called “The Violent Sequence”.  Antonioni again decided not to use it, but the band rewrote it into the magnificent “Us and Them” on Darkside of The Moon.

For the scene in which the airplane takes off and flies, Pink Floyd composed several heavy rock pieces, including “Take Off 1” and “Take Off 2”.  A third variation of “Take Off” was dubbed “Fingal’s Cave” by the band, and was considered the master for their own soundtrack album, had it been released.  Antonioni did not use any of these, and instead used an edit of Grateful Dead’s “Dark Star” from Live/Dead.

A second ‘driving on the highway’ scene featured variations of a rollicking folkish song called “Crumbling Land”, the second to contain actual lyrics and was eventually featured in both the film and official soundtrack.  A shorter version called “On The Highway” was also recorded.

The love scene between Daria and Mark proved to be more difficult to provide, as Pink Floyd recorded several vastly different pieces of music for the love scene.  The band initially tracked a spacey, psychedelic piece featuring Wright’s farfisa organ and David Gilmour’s delayed guitar effects with overdubbed vibraphone, not dissimilar to More’s “Quicksilver”.  After recording three different versions of this arrangement—with the third featuring overdubbed erotic sound effects and called “Oenone”, intended as the master for Pink Floyd’s own soundtrack album—Antonioni suggested a different musical approach.  “Love Scene 4” featured a majestic Wright piano solo, with an overdubbed vibraphone.  This too was rejected, and Pink Floyd simplified it to “Love Scene 5”, a double-tracked vibraphone piece, which was also dismissed.  A complete rethink produced “Love Scene 6”, a slow blues jam, renamed “Alan’s Blues” and meant for the band’s own soundtrack album.  That two was rejected, and Pink Floyd attempted one last arrangement for Antonioni’s love scene: a long, space-folk instrumental (reminiscent of “The Narrow Way, Part 1” and “Baby Blue Shuffle in D Major”) called “Love Scene 7”, which was also called “Rain In The Country” for the band’s own intended soundtrack album.  All five of these variations of the love scene were rejected and Antonioni used a multitracked solo guitar piece by Jerry Garcia instead.

Pink Floyd’s final contribution was used in both the film and official soundtrack: “Come In Number 51, Your Time Is Up”, the remake of “Careful With That Axe Eugene” featured in the explosion scene.  The band also recorded an alternate take called “Explosion” in a major key.


Ultimately, only “Heart Beat, Pig Meat”, “Crumbling Land” and “Come In Number 51, Your Time Is Up” was used and featured on the soundtrack.  Pink Floyd allegedly compiled their own eight-song, 40-minute master of their original music for a possible release, but it never emerged.  The film’s musical advisor Don Hall played several selections from that master on the radio in late 1969; a recording of that broadcast was used to make the legendary Omayyad bootleg, which gave Pink Floyd collectors a sample of some of the Zabriskie Point music left on the cutting room floor.  “Country Song”, “Love Scene 4”, “Alan’s Blues” and “Rain in the Country” all appeared on the bonus disc of the 1997 remaster of the Zabriskie Point soundtrack, with an additional 70 minutes of studio outtakes from the sessions appearing on the bootleg A Journey Through Time and Space, possibly dubbed on the sly from the mastertapes during the Zabriskie Point remastering process.  Finally, 47 minutes of Zabriskie Point recordings were featured on The Early Years: Devi/ation box set in 2016.


My reconstruction of the Soundtrack to the Film ‘Zabriskie Point’ collects the master takes of each song meant for each of the seven scenes, additionally using three variants of the love scene, presented in film order.  My intent is to present this reconstruction as a sister album to Pink Floyd’s More, so some tracks have been edited for the sake of release-appropriateness.  Each side is approximately 20 minutes and this reconstruction should be able to slip into Pink Floyd’s official cannon with no musical overlap.


Side A begins with “Heart Beat, Pig Meat” and “Country Song”, both taken from the 1997 Zabriskie Point remaster.  This is followed by “The Violent Sequence” from The Early Years; note this is the shorter version recorded during the actual Zabriskie Point sessions, as opposed to the longer Richard Wright demo recorded just before Dark Side of The Moon.  Next is my own unique edit of “Fingal’s Cave”, in which “Take Off 1” is hard edited onto the end of “Aeroplane” to make a more complete listening experience, both from The Early Years.  Next is “Crumbling Land”, taken from Zabriskie Point but pitchshifted to be in the correct key.  Side A closes with what I am calling “Love Scene”, which is my own unique edit of the piano/vibes mix of “Love Scene 4” from A Journey Through Space and Time, cutting the over-six minute track down to a manageable three minutes!

Side A begins with my own edit of “Alan’s Blues” from the 1997 remaster of Zabriskie Point; here I have edited out Gilmour’s first (and embarrassingly clumsy) guitar solo, cutting an entire minute out of its run-time.  Following is “Oenone”, the master take of Pink Floyd’s spacey version of the love scene.  Although their final master is as heard on the Omayyad bootleg, I am instead using the “Full Mix” as found on A Journey Through Time and Space bootleg, as it has superior sound-quality and added sound elements.  I have faded the song out 3:45, excluding the band’s ridiculous erotic noises, as I felt it disrupted the feel and flow of the album as a whole.  Closing the album out is “Rain in the Country” and “Come in Number 51, Your Time is Up”, both from the Zabriskie Point remaster.


While certainly not the greatest Pink Floyd album—and one can understand why it was never released—the Soundtrack To The Film 'Zabriskie Point' seems to stay close to my heart and holds a lot of air time on my music player.  The album showcases a series of snapshots of Pink Floyd genre-hopping, including individual songs that each play upon their diverse range of strengths and influences: experimental found-sound collage; heavy psychedelic rock; electric blues; atmospheric psychedelia; acoustic folk.  There is a bit of everything thrown in the mix, yet the album works as a whole, more so than their previous and equally-diverse soundtrack album for the film More.  Although largely instrumental, the two song-based gems “Country Song” and “Crumbling Land” are stand-out tracks that could rank as high as any of the Pink Floyd singles from the 1960s.  Soundtrack To The Film 'Zabriskie Point' has something for everyone and shows their essential continuity in between Ummagumma and Atom Heart Mother.