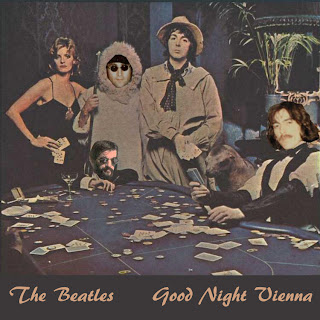 This album is the fifth and final in a series of “re-imagined” 1970s Beatles albums that presume the question: “What if the Beatles never broke up?”  Good Night Vienna collects the highlights of the various Beatles solo material from and around 1974 into one cohesive album, which followed the previous four re-imagined 1970s Beatles albums (Instant Karma!, Imagine Clouds Dripping, Living In The Material World and Band On The Run, chronologically).

Source material for Good Night Vienna starts with Lennon’s final solo album in the 1970s, Walls and Bridges, as well as George’s Dark Horse.  The Lennon-penned and performed token Ringo track was taken from his album of the same name.  1974 mostly saw Paul McCartney touring in support of Band On The Run, so the A-side of his 1974 single “Junior’s Farm” was used, as well as the highlights of his 1975 album Venus and Mars, being the closest available source material next to his 1974 singles.  Once again matching the atmosphere of all four of their solo projects into one cohesive Beatle-esque  yet strong album—strong for 1970s Beatles, that is—was actually a simpler task than previous re-imaginings, as I felt the strongest of their material all seemed to be Beatle-esque anyways.  This album came together rather quickly, and its effortless flow, while not making an incredible impact like Imagine Clouds Dripping or Band On The Run, is a rather unified and enjoyable listen (if one enjoys mid-70s solo Beatles material in the first place!).  “Venus and Mars” and it’s reprise was specifically used to bookend the album, with an introduction of the band at the start of Side A and a concluding farewell at the end of Side B (reminiscent of Sgt. Pepper).  New edits and crossfades were created for many of the tracks to make a continuous two sides of music, notably the first three tracks of Side A and the last three tracks of Side B.

As any astute follower of this series could assume, there would eventually come a certain point where these re-imaginings would no longer be possible, as Lennon ceased to make (commercially released) music in 1975, retiring to become a stay-at-home father.  We now have three choices to carry-on in the yearly fashion I’ve set forth with my series of 1970s Beatles albums: 1) continue this series without John Lennon; 2) continue this series with Lennon’s contributions being his Dakota acoustic home demos paired with Paul, George and Ringo’s studio solo material; 3) discontinue the series altogether.  As much as it might be a disappointment to you, constant listener, I have opted for Choice #3 and make the presumption that The Beatles took an indefinite hiatus in 1975, allowing for the other three to pursue their (sketchy) solo careers.  Since I’ve always felt that The Beatles had begun with John Lennon, it only seemed natural that they should end with John Lennon’s retirement.  Besides, after this point Paul and George’s solo albums diminished in quality at an appalling rate; it’s better to burn out then to fade away…

So sit back, relax and imagine if you will:  After the success of the 1973 Beatles album Band On The Run, John continues what is called his “Lost Weekend”, a period of drugs and debauchery initiated by Lennon’s expulsion by Yoko Ono; after a world tour in support of Band On The Run in early 1974, The Beatles retreat to record another album that summer, but sessions are plagued by a disheveled Lennon preoccupied with partying alongside his celebrity-friends, not to mention a sudden onslaught of laryngitis for George, preventing him from contributing any number of new songs he’d written for the album; Paul’s leadership sees the band through to completing the difficult album, encouraging a generally “live-band” sounding album with one of his song fragments “Venus and Mars” beginning and ending the album; the album was named Good Night Vienna by Paul, after the Lennon-written song featuring Ringo’s lead vocals.  A cover photo was taken featuring The Beatles (as well as a Linda McCartney!) dressed as characters mentioned in the lead single “Junior’s Farm” (Bob Dylan was again impressed).

The response was generally positive for Good Night Vienna both critically and commercially.  It was definitely not their strongest album to date, but it wasn’t a disappointment such as Living In The Material World, and many fans and critics compared the album to the quaint Let It Be album from 1970.  “Junior’s Farm” backed with the non-LP B-side “Ding Dong, Ding Dong” was a hit in 1974 and brief European tour was planned along with a few select American dates.  That fall, around the time of the single release of “Whatever Gets You Thru The Night” b/w the non-LP track “Spirits of Ancient Egypt”, Paul foresaw his dear friend and bandmate’s eminent destruction from his joyously turbulent excess, and knew that something had to give; perhaps The Beatles had lived longer than they should have?  Paul realized that John was simply masking his loneliness and the loss of Yoko, the person who created balance in his life.  The title for their apparently final album—a slang for “it’s all over”—was  prophetic in that Paul knew the only way to save John was to stop the madness of The Beatles, the entity that had enabled John’s destruction.   While playing the final American dates, Paul orchestrated a meeting of John and Yoko to reconcile and hopefully let John rediscover the missing balance in his life.  Paul’s plan worked, and John and Yoko once again found the missing pieces of themselves in eachother, backstage of The Beatles’ final performance at Madison Square Garden on November 28th, 1974 (Elton John was the opening act).  Both John and Paul decided it was time for the Beatles to take an indefinite break—to save John and free the others.  Seeing an opportunity for redemption for his previous family abandonment, John subsequently retired from music to concentrate on a domestic family life and to attend his soon-to-be-born second child.  The rest of the Beatles were free to pursue their own solo careers, which they most certainly did.  And the rest is history…  Or could have been, anyways.

Posted by soniclovenoize at 1:56 PM 36 comments: