Weezer - Songs From The Black Hole 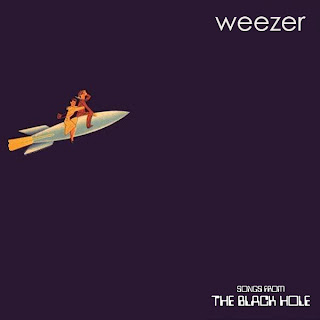 In an intentional effort for this blog to cover contemporary albums as well as the classic, this is a reconstruction of what could have been Weezer’s second album, the intended 1995 “space”-rock opera Songs From The Black Hole.  After a few rounds of demo-stage development and an initial recording session, the album was eventually scrapped and reworked into the first four songs of their second album proper, 1996’s Pinkerton.  My reconstruction is designed to be a full, complete album (as much as possible anyways) so a number of edits and crossfades were made; this is not simply a playlist of the intended songs from Songs From The Black Hole.  Furthermore, in an effort for the album to become ‘more operatic’, pieces of "Longtime Sunshine" were used throughout to create a leitmotif and the entire album was organized into three 15-minute acts.  All recordings used were authentic Weezer or Rivers Cuomo recordings; no fan-made covers or re-imaginations were used.


This reconstruction is technically a revision as I had previously created one in late 2010 upon the release of Alone III (the solo Rivers Cuomo release containing the final missing pieces needed to reconstruct Songs From The Black Hole).  Unfortunately that reconstruction suffered from the ethos of ‘trying to being the first!’ and had some errors I regret making.  It was a hasty reconstruction made to compete with about thirty others, all making ‘their own take on SFTBH’, and mine contained some missteps (namely my attempt to change the ending of the rock opera itself!).  I believe hindsight has allowed me to create a more natural, flowing, and complete Songs From The Black Hole reconstruction, one truer to Rivers Cuomo’s original narrative and presented as a sonically finished album.


A problem with the source material is the varying quality of recordings.  Since only half of this album was even recorded properly in the studio, half of this reconstruction can only exist as solo Rivers Cuomo demo tapes.  Luckily for us, Weezer intentionally recorded the songs from Songs From The Black Hole—and Pinkerton as well—in a rough, harsh and abrasive manner, reminiscent of live recordings.  The reality is that these rough-sounding studio recordings generally sit well alongside Cuomo’s own rough-sounding home demos!  To further push this envelope I chose to use alternate 'rough takes' of “Getchoo” and “Tired of Sex” found on the Pinkerton Delux remaster.  That also allows us a further alternate listening experience to that of Pinkerton (which is the reason we are doing this in the firstplace, right?).


A second lucky break for us, Weezer frontman Rivers Cuomo and roadie Karl Koch has given the Weezer fan community an abundance of information about this intended album.  We know there were three official tracklists: two demo versions and an actual script of the opera, complete with character dialog and musical interludes, written by Cuomo.  The question is which tracklist should be used?  In looking at the source material available, it seems that the elongated and often superfluous script-tracklist contains versions of the songs we simply do not have.  For instance, alternate lyrical versions of “Tragic Girl”; we could not use this track in our reconstruction because the version we have does not fit the lyrical narrative and thus makes no sense.  Furthermore, it seems the demo versions available to us from the Alone series are all from Cuomo’s second tracklist (because of the inclusion of “Who You Callin Bitch?”), yet the available version of “You Won’t Get With Me Tonight” is from the first tracklist (as the lyrics overlap with the aforementioned “Who You Callin Bitch?” instead of acting as a closing number).  The answer is to combine all three versions of the tracklist into one ad hoc tracklist.  Furthermore, each act features the addition of one song not originally featured on the tracklists in an effort to round each act up to 15 minutes and thus a 45-minute total album runtime.  These include “Why Bother?” (long-known to have been a part of the project but just simply not found on the demo), “Waiting On You” (featured in the third script-tracklist but not the demos) and “Getting Up And Leaving” (while not a part of either of the three tracklists, a Pinkerton-era outtake that thematically fits perfectly into SFTBH).   Lastly, some volume adjustments were made on certain songs to make this a more sonically dynamic album all around.


Act I of my reconstruction begins with the piano intro to “Longtime Sunshine” hard edited into “Blast Off!”.  Not only does this create an excellent leitmotif and introduction to the album but it solves the problem of the missing first beat of “Blast Off” (lost somewhere on an older demo presumably).   Here we see the main protagonist Jonas embarking on a space-mission and discussing his woes to shipmates Wuan, Dondo and the android M1.  Upon entering the scene, Dondo calls the ship’s cook—Jonas’s ex-flame Maria--an unflattering expletive, which instigates a conversation between Jonas and Maria contained in the lyrics of the following song.   This becomes problematic in my reconstruction since we have two songs that occupy the same “narrative space” from two different tracklists: “Who You Callin Bitch” and “You Won’t Get With Me Tonight”.  Since the later is a mainstay of the album and, in this author’s opinion, is one of the band’s best songs, we should give the song its prominent place.  Here I’ve created a hard edit from the first half of “Who You Calling Bitch” directly into “You Won’t Get With Me Tonight” so there is little lyrical overlap.  The channels of the song were switched so that the drums are predominantly panned to the left to match the previous songs.  This segues directly into “Why Bother?”, which although was not present on any of the tracklists, it is common knowledge that it was a part of SFTBH.  Here it is placed in the only logical position, as Jonas explains his hesitancy to be with Maria because of previous heartbreaks.  “Maria’s Theme” is the combination of “Oh Jonas” and “Please Remember” with a softened fade-in from its usually clipped beginning, in which Jonas is beckoned by Maria and finally gives in to his own desires.  Segued into the love scene of “Come To My Pod”, it is followed by Jonas’s sudden realization that this is not for him in the aptly-titled “This Is Not For Me”, which I have crossfaded into the beginning of the studio outtake version of “Tired of Sex” mimicking the demo arrangements.


Act II fades in with the a capella arrangement of “Longtime Sunshine” (thought to be the “reprise” version found on the demo sequence) edited into “Superfriend” in which Jonas confides to his friend Laurel his romantic woes, who subsequently scorns him.  Laurel is the “good girl”, in contrast to the "bad girl" Maria, and Jonas realizes he is smitten by his shipmate and confidant; unfortunately Laurel has friend-zoned him, halting his affection.  Later, Maria gives birth to Jonas’s daughter as depicted in the following “She’s Had A Girl” and Jonas realizes he is trapped.  Suddenly Wuan and Dondo enter the scene and announce that their spaceship has finally landed in “Good News!”.  Next is my own creative decision to beef up the album by adding “Getting Up And Leaving”, a song not usually from Songs From The Black Hole.  Yet it completely fits in with the themes of escapism in the opera, and when placed here, Jonas is literally leaving Maria and his newborn daughter (details otherwise ambiguous).  Next is “Now I Finally See” in which Jonas realizes he wants to be with Laurel and tries to win her over.  She denies him yet again (details of this are ambiguous in the opera) and Jonas laments in the rough tracking alternate take of “Getchoo” while likewise Laurel second-guesses herself in “I Just Threw Out The Love Of My Dreams”.


Act III opens with the last non-tracklist addition, the Pinkerton B-side “Waiting On You”, which was actually written for the unreleased SFTBH anyways.  Here Maria cries out, waiting, wanting and hoping for Jonas’s return to her and their child.  After Laurel’s rejection, Jonas has an epiphany that Maria, the “bad girl”, was the right girl for him all along in “No Other One” and the two lovers finally embrace and rejoice in “Devotion”.  In a devastatingly dramatic turn, all expectations come crashing down when Jonas finds a used condom in “What Is This I Find?”  Used by Maria and either Wuan or Dondo during Jonas’s absence, this fulfills his own prophesy from Act I—"Why bother?  It’s gonna hurt me."  At the conclusion of the rock opera, Jonas reiterates the reoccurring sentiment of escapism throughout Songs From The Black Hole in “Longtime Sunshine”, a metaphor for 'the great something' that Jonas is searching for, be it space travels or amorous ventures.

What is the moral of this story, if any?  Jonas is tragic character poisoned by his own wanderlust.  He leaves us with a final goodbye and a warning that one’s own indecision is one's own condemnation.  One can never truly escape anything, and it’s often best to buckle down and face it head-on rather than run away from it.  Or, rather, blast off up into the stars...