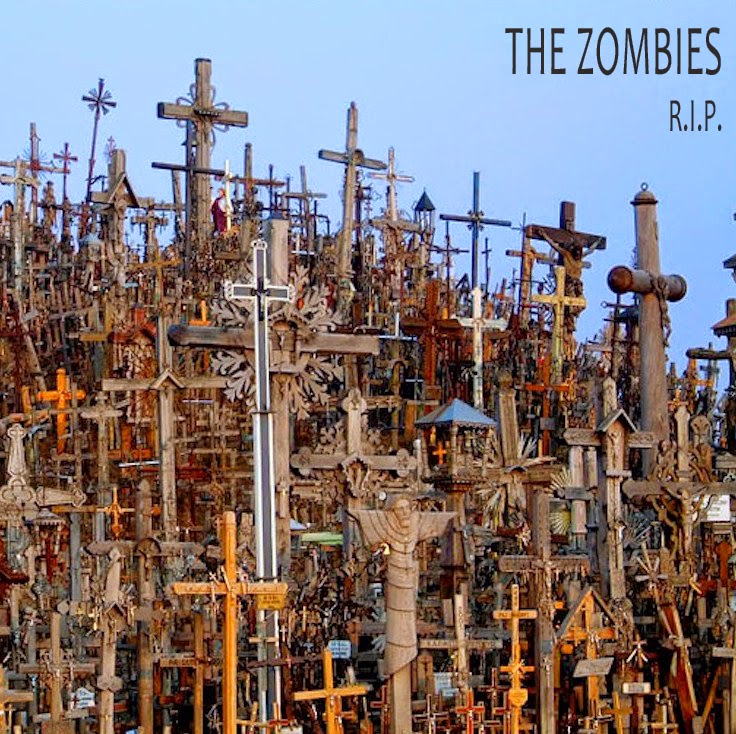 
This is a reconstruction of what would have been the final Zombies album, an intended 1969 release as a posthumous follow-up to their sleeper-hit Odessey and Oracle.  While all 12 albums tracks were collected in the box set Zombie Heaven in 1997 and then sequenced as originally intended as an official Japanese release in 2008, my reconstruction attempts to create a more well-rounded and cohesive album with a new sequence that more evenly distributes the posthumous 1969 Argent-led tracks with the overdubbed 1964-1966 Blunstone-led outtake tracks, as well as using alternate mixes of both.  Also through creative editing I was able to add more Colin Blunstone vocals to the album and less Rod Argent lead vocals.  In effect, my R.I.P. seems a bit less awkwardly anachronistic, and more a cohesive theoretical baroque-pop follow-up to Odessy and Oracle.

The Zombies are a perfect example of how sometimes great things can be overlooked and simply fall through the cracks.  Despite consistently producing some of the most well-crafted and well-performed pop-rock songs of the 1960s, the amount of new material from the band approached a near standstill by 1966.  The music scene was becoming increasingly psychedelic and the generally straight-laced Zombies were in danger of becoming irrelevant.  With a label quickly becoming uninterested and a live circuit drying up, they pooled their own scant resources together and financed the recording of their sophomore album, a sink or swim record entitled Odessey and Oracle.  Recorded literally as The Beatles walked out of EMI Studios after completing Sgt. Pepper in 1967, The Zombies utilized the plethora of exotic instruments their British pop brethren left lying around.  Adorning magnificently-written psychedelic pop songs with these instruments as well as serendipitous harmonies, the outcome was one of the greatest masterworks of the 1960s, let alone 1967.  But the unfortunate reality is that relatively few people really paid attention.  The magnificent “Care of Cell 44” ceased to be a hit, live gigs dried up and singer Colin Blunstone, having no stake in The Zombies’ publishing royalties, left the band because he simply didn’t have the money to continue.   The album was released to silence in 1968.

Yet due to friends in high places—namely Al Kooper who championed the band to Columbia in the US—Odessey and Oracle was given a second chance on the other side of the Atlantic.  But because of the fatal choice to push “Butcher’s Tale” as a single, the album again fell to silence.  It wasn’t until another year passed that radio picked up on “Time of The Season” which propelled the song to an eventual status as an anthem of the Summer of Love, despite being two years late and from a band that had ceased to exist.  But keyboardist Rod Argent and bassist Chris White, whom were already occupied in their current project Argent, were offered the chance to essentially capitalize in the unexpected interest in the dead Zombies who were suddenly undead.  In an effort to create closure to the band that had passed away before it’s time—and a chance to not only clear the vaults but to advertize their band Argent—the pair began work on the final Zombies album, the posthumous R.I.P.

The plan was simple: the first side of the album was to feature “new” Zombies recordings and the second side of the album to feature newly finished outtakes from the numerous singles-sessions from 1964-1966.  Argent and White collected the best of the series of demos recorded in-between the demise of The Zombies and the formation of Argent, recordings which were used to secure their own record contract.  While sometimes reminiscent of the mid-60s psyche-pop of The Zombies, their songs bared a stronger resemblance to the tail-end of the 60s and the hard rock/prog of Argent.  In stark contrast to this, the outtakes found on side B were simply anachronistic, sounding exactly like they were: tracks recorded around1965 with new layers of lush harmonies and some with new orchestration.  As it stands, R.I.P. sounded more like a document of how far recording techniques had progressed in the 1960s.  Of the Side B tracks, only “Walking In The Sun” approached the soundquality of Side A with newly recorded symphonic instruments and new lead vocal by Colin Blunstone juxtaposed with the backing track dating from a demo session in 1964.  Singles were released for “Imagine The Swan” and a newly-finished “If It Don’t Work Out” (which was originally a 1965 demo for Dusty Springfield), both failing to replicate the success of “Time Of The Season” or even their 1965 hit “Tell Her No” and the R.I.P. album was scrapped.

Of the 12 songs slated for the album, most trickled out as bonus tracks on various compilations throughout the decades.  It wasn’t until 1997 with the insanely comprehensive four-disc box set Zombie Heaven that the public heard R.I.P., as all 12 of the tracks from the album were featured on the ‘rare/studio outtakes’ disc .  Finally in 2000, the same exact R.I.P. masters as found on Zombie Heaven were released as their own standalone album in correct track sequence, albeit as a Japanese import with numerous bonus tracks (followed by a 2008 compilation of outtakes from this era of the band called Into The Afterlife).  In plain sight—but also apparently as overlooked as  Odessey and Oracle was in 1968—we could hear the bizarre combination of late-60s proto-prog and mid-60s pop.  Perhaps we can have a second memorial service for The Zombies and allow this album to better rest in peace?

My reconstruction of R.I.P. had two main goals:
1) To resequence the songs and use some alternate mixes so that the vast time difference between recording dates is less-apparent, making the Argent-led songs and the refurbished classic Zombies songs intermingle, in turn making a more cohesive album.
2) Less Rod Argent and MORE Colin Bluestone!  After all, he was the voice of The Zombies.  To do this we are able to use recordings from Blunstone’s first solo album One Year (produced by fellow Zombies Argent & White), replacing Argent’s vocals with Blunstone’s.  Just as well, we will drop the two weakest Argent-led songs for others, making the album more Zombie-like and less Argent-like.

Side A begins much as the official R.I.P., with “She Loves The Way They love Her”.  Instead we use the version from One Year but with the audience sound effects from the R.I.P. version overdubbed at the appropriate points, effectively “replacing” Argent’s vocals with Blunstone’s.  The R.I.P. mix of “Imagine The Swan” is next, with the orchestral mix of “If It Don’t Work Out”  from the compilation Into The Afterlife following, an attempt to make a more baroque-pop follower to Odessey and Oracle.  Next, Colin Blunstone’s lead vocal from “Smokey Day” is extracted from his One Year album and superimposed into the alternate mix of Argent’s “Smokey Day” (a bonus track on the Repertoire remaster of Odessey and Oracle), again creating a new Colin lead vocal that sings a harmony to Rod’s.  Note that the vocals fall out of sync in the last verse, due to Colin intentionally deviating from the rhythm of the vocal; no attempt was made to change his artistic decision to sing the verse in that manner.  The R.I.P. versions of “If It Don’t Work Out” and “Conversations Off Floral Street” end the side, the later being the only post-break-up song on the album featuring the original Zombies lineup, including guitarist Paul Atkins and drummer Hue Grundy.

Side B opens with the R.I.P. version of “I’ll Call You Mine”, following with an unused Argent track from this era which seemed more appropriately Zombie-esque, “Telescope” from the Into The Afterlife compilation, which replaces “Girl Help Me”.  My own unique edit of “I Know She Will” follows when the first half of the orchestral version from Into The Afterlife is edited together with the second half of the full-band mix found on the R.I.P. album, creating a strong dynamic and emphasizing its orchestration.  Next is another “more Zombies-like Argent track” taken from Into The Afterlife and remixed my myself, the classical “To Julia” which occupies the same idiosyncratic function as “Butcher’s Tale” held on Odessey and Oracle and replaces “I Could Spend The Day”.  The R.I.P. mix of “Don’t Cry for Me” attempts one final ruckus before giving way to my own unique edit of “Walking In The Sun”, again editing the orchestral version from Into The Afterlife onto the full-band R.I.P. mix, creating a wide dynamic.