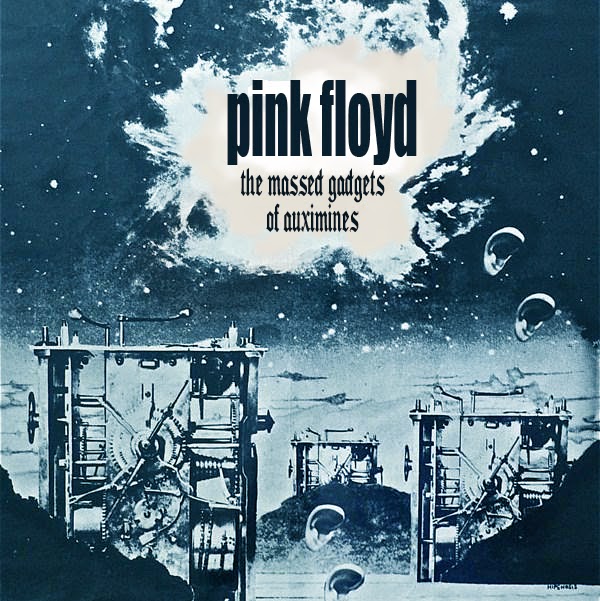 
9. Beset By Creatures of the Deep


12. The Labyrinths of Auximenes


13. Behold the Temple of Light


In doing research for my previous Pink Floyd album reconstructions I discovered an overlooked “album that never was” that I found intriguing conceptually and challenging logistically.  This is a reconstruction of an all-studio version of Pink Floyd’s experimental performance piece “The Man and The Journey”, often titled The Massed Gadgets of Auximenes.  This reconstruction attempts to present a version of the performance that would have taken the place of the Ummagumma album, only utilizing studio recordings and condensing the performance down to two sides of a vinyl album.  Note that this reconstruction is conceptually not a part of my other two Pink Floyd reconstructions from this period, Vantage Point and Soundtrack To The Film Zabriskie Point; not only are there song overlaps but all three belong in different continuities of my blog.


Musical soul searching was the predominant mindset in 1969 for Pink Floyd.  The previous year had seen the band attempt to mimic their former bandleader’s singles-oriented approach to psyche-pop with their second release Saucerful of Secrets as well as the single releases “It Would Be So Nice” and “Point Me At the Sky”.  After the failure of the two singles to make any significant chart impact, Pink Floyd switched gears and focused on what the remaining four members could do the best without Syd Barrett: sprawling, experimental psychedelic jams.


Pushing this envelope to its fullest extent in 1969 gave birth to a series of performances sometimes entitled The Massed Gadgets of Auximenes but usually titled “The Man and The Journey”.  Arranged as two 40-minute movements, the first set seemed to follow the events of a typical person throughout his mundane, British, post-Industrial life—this segment was called “The Man”.  The set included the members of Pink Floyd actually building a table on-stage (to represent ‘Work’) and being served tea (to represent ‘Teatime’).  The concept of the second is less clearly defined and seemed to be largely instrumental and improvisational.  Called “The Journey”, the piece seemed to center around an individual’s journey for… well, who knows?  Pink Floyd has never given any hints of what the prize of the conceptual journey was, and the task is apparently left to the imaginations of the listeners.  My own interpretation is that “The Journey” is the evolution of agricultural mankind into industrial mankind, the quest for knowledge and technology; while there isn’t an actual Greek name Auximines, it could be stemmed from the Latin auxiliāris (to help) and the first pharaoh of Egypt, Menes (whose name translates to “he who endures”), literally a metaphor for the king (of humanity) who is assisted by gadgets (our technology) as he endures (history).


Both sets included songs that had been featured on the Soundtrack To The Film More, released earlier in 1969: “Cymbaline”, “Green Is The Colour” and “Quicksilver”.  Just as well, the sets contained songs that would eventually appear on Ummagumma later that year: “Grantchester Meadows”, “The Narrow Way” and elements of “The Grand Vizier’s Garden Party”.  The performances also contained an Ummagumma outtake “Biding My Time” and a 1968 single b-side that had created the template for this new era of Pink Floyd, “Careful With That Axe Eugene.”   Amongst these more formalized songs were improvisational jams that included elements of “Saucerful of Secrets” and “Interstellar Overdrive” as well as a few drum solos that varied from performance to performance, which would later emerge in various places as “Up The Kymber”, “Party Sequence” and “Heart Beat, Pig Meat”.  And as aforementioned, Pink Floyd were also served tea and built a table.


Although this was a wonderful performance—best memorialized as a stereo bootleg sourced from a BBC recording & broadcast of their May 12th 1969 performance—the band could not fathom how to make a studio recording of the conceptual performances and release it as a commercial product.  Pink Floyd instead chose to release Ummagumma in its place, a double album that featured a disc of live performances and a second disc of experimental studio recordings, that were essentially collected individual solo recordings by each member.  In many ways, Ummagumma seemed to be the commercial product version of “The Man and The Journey”, sharing much of its aesthetic but without its incomprehensible concept and untranslatable performance pieces.  That is, until now...


For my construction, we create an alternate timeline in which Pink Floyd never abandoned Massed Gadgets for the somewhat streamlined Ummagumma, and present it as Pink Floyd’s third studio album.  But we have two challenges: Firstly, my goal was to avoid using any actual performances of “The Man and The Journey” and stick exclusively to studio recordings.   While this seemed to work for almost all of “The Man”, it worked for only half of “The Journey” since studio recordings simply don’t exist for those missing segments.  I felt that substituting in the fantastic BBC May 12th recording would be ‘cheating’, so in these instances I’ve used approximations and substitutions that will be explained later.  The second challenge is time length: while each set ran approximately 40 minutes, this reconstruction, unedited, seemed to run 60 minutes once all studio recordings were sequenced.  Utilizing my own “less is more” ethos, the decision was made to edit each of the sets down to two 24-minute sides of an LP.  The results were obviously less sprawling than their live counterparts, but my reconstruction appeared more concise, focused and in my opinion more enjoyable.  Which leads one to the question: if “The Man and The Journey” had actually been a studio album, would it have been a single album or double?  Based on the results of my reconstruction, I believe it would have been a more abbreviated single disc.


Side A of my reconstruction—“The Man” segment—begins with “Grantchester Meadows” from Ummagumma, here titled “Daybreak pt I”.  This represents The Man waking and beginning his day, the song concluding with him running to work.  In the original live performance, this is followed by the members of Pink Floyd constructing a table to represent The Man’s day at work.  There is obviously no studio recording of this, so instead I substituted “Sysyphus” from Ummagumma as “Work”; the track seemed, to me, to sound like a chaotic work day at a factory!  The original performances followed with “Teatime”; no studio recordings exist and there really is no plausible substitution for the sound of Pink Floyd being served and drinking tea, so "Teatime" is the only song excluded from my reconstruction.  The studio outtake “Biding My Time” from Relics is “Afternoon”, The Man’s leisure after a hard day’s work.  Following is “Doing It!”, a representation of sexual intercourse.  While the band used different drum solo patterns for this track throughout the tour, I chose “The Grand Vizier’s Garden Party” as it had the best flow in-between “Afternoon” and “Sleep”.  An edit of “Quicksilver” from More is used as “Sleep”, and “Cymbaline” is used to represent the nightmare The Man has during his sleep (this being the second appearance of the track on my blog!).  The night turns to day and the never-ending cycle continues as The Man wakes in “Daybreak, pt II”, an instrumental reprise of “Grantchester Meadows”.


Side B—“The Journey” segment—is conceptually ambiguous.  Unlike the previous suite, “The Journey” concept is not self-evident, and the band has given absolutely no clues to the meaning.  Pretensions aside, we can only gather the meaning of this piece through the song titles and the mental images the music invoke, which was probably their intent.  Aptly beginning with “The Beginning”, “Green is the Colour” from More is used.  Following this is “Beset by Creatures of the Deep”, which was usually performed as “Careful With That Axe Eugene”.  Instead I used “Come In Number 51, Your Time Is Up” from Zabriskie Point (for the third time on my blog!!) as the song is essentially “Eugene” played in a different key, Em instead of Dm; because of this, it follows “Green is the Color” (in G) more harmonically as well as matching the following “The Narrow Path” (which begins with an Em drone) and staying within the same chordal family.  “The Narrow Path” from Ummagumma seems to be the start of our protagonist’s journey into the next track, “The Pink Jungle”.  Here, Pink Floyd alternated between a jam of the intro to “Pow R Toc H” or a jam originating from the brief time both Syd Barrett and David Gilmour were in the band, entitled “Nick’s Boogie”.   Since we know “Nick’s Boogie” was eventually incorporated into the second movement of “Saucerful of Secrets” (retiled “Syncopated Pandemonium”), I will utilize an August 9th, 1969 Hilversum 3 radio broadcast recording of that segment, taken from the remastered bootleg Celestial Instruments.  Our protagonist seems to exit the Jungle and enter “The Labyrinths of Auximenes”, performed as the improvised jam sections of “Interstellar Overdrive”, again taken from the Celestial Instruments bootleg.  Upon reaching the center of the maze (either literally or metaphorically, take your pick), he can only “Behold The Temple of Light”, which was a unique improvisational jam of the intro to “The Narrow Way”.  There are no studio recordings of this piece, so a loop was created from the song’s intro on Ummagumma.  Harnessing his prize, the protagonist reaches “The End of The Beginning”, here as the fourth segment of “Saucerful of Secrets”, “Celestial Voices”, taken from the Celestial Instruments bootleg.

Posted by soniclovenoize at 7:03 PM 36 comments: