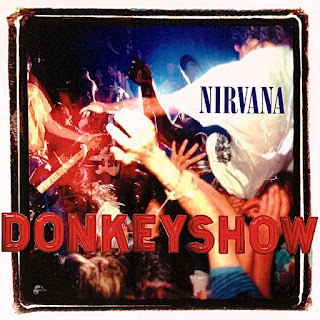 Hello there.  Hope you are staying safe!  Although quarantine restrictions are slowly being lifted, alas there won’t be any live music anytime soon.  So in remembrance of the magic that was a band making music right in front of you--just for you, the energy and passion, the direct connection between artist and audience--I am going to upload a trilogy of famous live albums that never were.  First is a reconstruction of the unreleased 1994 live Nirvana album Donkeyshow.  Originally the first disc of the double-live album Verse Chorus Verse, slated for a November 1994 release, the album was canceled and instead the second disc was released as its own album: MTV’s Unplugged.  Donkeyshow was later meant to be released on its own, but was instead reimagined as 1996’s From The Muddy Banks of The Wishkah.  This reconstruction attempts to present what Donkeyshow was supposed to sound like, mostly using the performances originally slated for inclusion on the album.  Only the best sources were used, EQd and volume adjusted for album cohesion.

By 1994, Nirvana was the biggest rock band in the world.  Upon the suicide of frontman Kurt Cobain in April, that status was cemented, although this ensured no new recordings from the band.   With only a small discography of three studio albums and one rarities compilation, Nirvana had made a tremendous impact on music and culture with a limited time and body of music.  How can a record label continue the legends of rock greats?  Well, with a live album, of course!

By the summer of 1994, the Nirvana camp decided to prepare tapes for a double album of live material that covered their entire history, in hopes to upstage the rampant bootleggers and satisfy the hunger for new music from Nirvana’s grieving fans.  Titled Verse Chorus Verse--which was at one point an early title of In Utero--the first disc would contain a compilation of recordings from their standard electric show, ideally recreating an actual Nirvana concert.  The second disc was to feature the entirety of the band’s recent performance on MTV Unplugged.  In effect, Verse Chorus Verse was meant to demonstrate the versatility of the band and present their ‘light’ and ‘dark’ sides.  The double album was scheduled for a street date on Halloween and an official release on November 1st, 1994.

Although a rough assemblage of Disc One was compiled with promo tapes manufactured in-house at DGC Records and artwork proofed, Chris Novoselic and Dave Grohl did not have the heart to continue the project, their wounds being too raw from the loss of their friend and bandmate.  Ultimately, Verse Chorus Verse was scrapped and the band instead chose to just simply release the second disc as MTV Unplugged.  It was a wise move; the album was considered a reverent eulogy for Cobain and a brilliant swan song for the band, winning a Grammy and hailed as one of the greatest live albums of all time.  Simultaneously released was the VHS Live! Tonight! Sold Out!, a finalized version of a concept Cobain originally conceived: a documentary of the band’s rise to fame intermingled with live clips.  The video sufficed as the only souvenir of an official "electric" Nirvana show.

The remaining members of Nirvana never gave up on the concept of an "electric" live album  and made plans to release Verse Chorus Verse’s forgotten first disc as a standalone release called Donkeyshow (taken from Cobain’s often-said homophone of danke schoen).  But hindsight gave Grohl and Novoselic an opportunity to rethink the compilation itself, and Donkeyshow never saw the light of day.  Eventually Donkeyshow’s tracklist was slightly altered—using different live performances and completely remixing the others—and it was reborn as 1996’s From The Muddy Banks of The Wishkah.  The album debuted at number one on the charts and was the last word from Nirvana in the decade they reigned.

Despite Wishkah’s success, the contents of the original Donkeyshow remained a great Nirvana mystery for some time, with fans wondering what it had originally sounded like when initially conceived.  Over a decade later, scans of the DGC in-house promo tape emerged, revealing the songlist although without performance dates.  Even though very few were privy to the audio, it was verified that only a handful of versions from Donkeyshow actually made it to Wishkah!  But with no leaked audio from the tape, the mystery only deepened as Nirvana obsessives wondered what actual performances were on the album.

It wasn’t until December 2019 that Robert Fisher, Nirvana’s longtime art director, posted his long-lost test proofs for the actual artwork for Verse Chorus Verse and Donkeyshow on his Instagram.  Revealing for the first time ever not only what Verse Chorus Verse would have actually looked like—which was a bit of an amalgam of the MTV Unplugged and Live! Tonight! Sold Out! artwork in a collaged gatefold packaging—but the liner notes that specifically stated which shows each of the songs originated from!  Surprisingly, many of the recordings stemmed from some of Nirvana’s most heavily bootlegged live shows: Pat O’Brien Pavilion, Del Mar, CA 12/28/91, distributed as a Westwood One promo CD; Paramount Theatre, Seattle, WA 10/31/91, Nirvana’s legendary Halloween show which was one of their most popular bootlegs; Pier 48, Seattle, WA 12/13/93, recorded for and televised as MTV’s Live & Loud.   Five of the cuts were the same performances as heard on Wishkah (although in a different mix) and another five were sourced from otherwise completely unheard, uncirculated shows.  Two of the later--"Serve The Servants" from 1/7/94 and "Sappy" from 11/22/89--surfaced as low quality mp3s.

Since complete rips of the full 60-minute Donkeyshow do not circulate, we will use Fisher’s liner notes to reconstruct a facsimile Donkeyshow from the best quality versions of the Paramount, O’Brien Pavilion and Pier 48 shows.  The mixes from the five Wishkah-overlapping recordings will not be used, as they are a bit muddy and Cobain’s guitar was mixed to mono; we will try to use the original Andy Wallace mixes from the early 90s, at least in the case for the Paramount and Pat O'Brien Pavilion shows.  Additionally, we will substitute different soundboard recordings for the five songs not available, using similar, same-era recordings.  We will also attempt to match the side lengths as stated on the promo cassette for accuracy and master this reconstruction at a similar volume as the original 1994 master of MTV Unplugged, as this would theoretically be paired with Donkeyshow, had it been released.  Finally, to make this Donkeyshow reconstruction a bit more authentic to an actual Nirvana concert, all mistakes were left as-is and we will include the crucial element of any Nirvana concert (that Wishkah unfortunately overlooked): Novoselic’s drunken stage banter!

My reconstruction begins with a trio of songs taken from JWB’s excellent remaster of the O’Brien Pavilion bootleg, “Drain You”, “Aneurysm” and “Breed”.  Note that two channels of Cobain’s guitar is panned stereophonically, as opposed to the channels summed to mono and panned slightly right as on Wishkah.  On the actual Verse Chorus Verse/Donkeyshow, “Serve The Servants” from was taken from the Seattle Center Colosseum 1/7/94; since that show is not available to us, I substituted the version from Pier 48, just 23 days earlier, taken from the fourt disc of the In Utero 20th Anniversary Super Deluxe box set.  Next is “Smells Like Teen Spirit” again from Del Mar.  On the original Donkeyshow, “Spank Thru” was taken from The Astoria 12/3/89; since we do not have that show available to us, I used the version from Fahrenheit, MJC Espace Icare 12/1/89, two days earlier.  “Sliver” from Del Mar again, then “Dive”, substituted with 12/1/89.  “Lithium” from Del Mar, yet again.  They sure liked this show, didn’t they?

Side B—as heard on the promo tape versions—begins with the slower, early “Rape Me” from the Paramount Halloween show, taken from JWB's remaster of the bootlegged original Andy Wallace mix.  Next, “School” from the San Diego Sports Arena 12/29/93 is not available, so we substitute the classic Palaghiaccio 2/22/94 version, from just under two months later.  Likewise, the following “Sappy” from Geneva 11/29/89 is not available, so we will substitute it for the classic Vienna 11/22/89, one week earlier.  The ripping “Negative Creep” from Halloween at the Paramount is next, followed by the trilogy of “Heart Shaped-Box”, “Blew” and “Scentless Apprentice” from Live & Loud 12/13/93.  The album closes with “Territorial Pissings” from, of course, Del Mar.

Posted by soniclovenoize at 9:57 AM 37 comments: