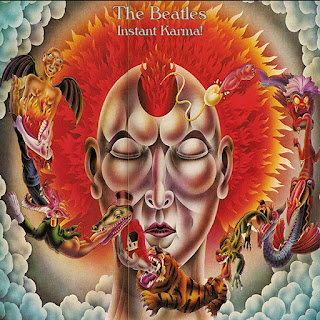 Alright, you asked for it, you got it!  This is an UPGRADE of the first in a series of album re-imaginings that proposes “What if The Beatles didn’t break up?”  This first volume—Instant Karma!—would have theoretically been released late 1970, and was intentionally raw and stripped down.  This upgrade notably uses the brand new All Things Must Pass 50th Anniversary remix as the source for George’s tracks, as well as the 50th Anniversary remixes of Plastic Ono Band for Lennon’s.  In doing so, John’s songs sound slightly more polished and George’s songs sound slightly less polished, somehow meeting Paul in the middle.  I have also thrown in a couple more surprises as well...   Maybe you can find them?

My original album notes from 2012:


Instant Karma! is released to critical and commercial success in late 1970, re-establishing The Beatles as a dominant musical force in the 1970s.  Three hit singles were released from this album in 1970 and early 1971: “Instant Karma!” b/w the non-album B-side “That Would Be Something”, “Maybe I’m Amazed” b/w the non-album B-side “Apple Scruffs” and “My Sweet Lord” b/w the non-album B-side “Well Well Well”.  The success of Instant Karma! gave a new confidence to the band that was so close to breaking up, especially with a new producer, a stronger leading-role for their lead guitarist as a songwriter and the band's uncertainty of relevance in a new decade.  Regrouping in the summer of 1971 with a new set of songs and a new sense of unity, The Beatles attempt to record their second album of the 1970s.  Can you... imagine?

Posted by soniclovenoize at 1:51 PM 52 comments: