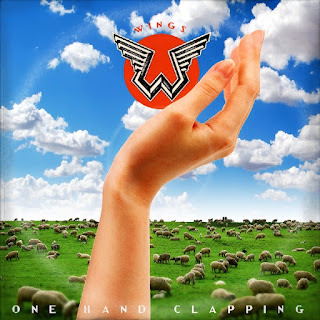 My how time flies! Why is the pandemic not over yet!? Sorry for the delay, but it’s finally here-- the second of a trilogy of famous live albums that never were, in memory of the live music we can’t quite yet experience again. This is a reconstruction of the proposed 1974 live in-the-Abbey Road studio album One Hand Clapping by Paul McCartney & Wings. Originally meant as the studio rehearsals for a 1974 Wings Over Australia tour that never happened, the proceedings were filmed for a possible film release, akin to The Beatles’ Get Back project eight years earlier. Despite the high quality of live studio performances—especially of the then-unreleased “Soily”--McCartney shelved the entire project, as was the fate of a number of other self-financed Wings film projects throughout the 70s and 80s. This reconstruction attempts to replicate what a double-LP release in 1974 could have been like, using the best possible sources, including official releases and painstakingly-remastered bootleg recordings. All tracks have been sequenced in the actual recording order, spread across four sides of a vinyl record.

The arrival of Band on The Run signaled a few changes in Paul McCartney & Wings. Firstly, it was McCartney’s first post-Beatles “masterpiece album”, finally equaling the quality of a typical Beatles album. Miraculously, the album was a product of the trio of Paul, Linda McCartney and Denny Laine, as drummer Denny Seiwell and guitarist Henry McCullough quit the band just before the start of the album’s recording sessions. This eventually led to the second major change for Wings: a new line-up. A month before Band On The Run’s December 1973 release, Wings broke in their new guitarist Jimmy McCulloch by recording some of Linda’s songs as Suzy and The Red Stripes, as well as a session for Paul’s brother Michael, as McGear, in February 1974.

Wings finally recruited drummer Geoff Britton and headed to Nashville in July to rehearse for a planned tour of Australia. While they were there, Wings also recorded the single “Junior’s Farm” (one of this author’s favorite Wings songs) as well as a handful of country-tinged tracks under the name The Country Hams. Rehearsals for the theoretical tour continued across the ocean in late August at McCartney’s old stomp: Abbey Road studios! But McCartney thought a little more of these activities than just simply rehearsals, as he employed boy-genius engineer Geoff Emerick to record the session, as well as David Litchfield to film and direct the sessions for a possible documentary film release.

The first day of rehearsals on August 26th produced full-band versions of “Jet”, “Let Me Roll It”, “Junior’s Farm”, “My Love”, “Little Woman Love”/”C Moon”, “Maybe I’m Amazed” and a short instrumental jam which would become the theme song for the project: “One Hand Clapping”. The second day of recording produced takes of “Band On The Run”, “Wild Life”, “Hi Hi Hi”, “Live and Let Die”, “Soily”, “Go Now”, “Blue Moon of Kentucky” and “Bluebird.” Day three of recording saw Paul performing a number of songs alone at the piano, which has posthumously been dubbed “The Cabaret Sequence.” Paul went though supposedly impromptu performances of “Suicide”, “Let’s Love”, “All of You,” “I’ll Give You a Ring” and a ‘proper’ take of “Baby Face.”

Day four saw the entire band returning to the studio to add overdubs to the live tracks recorded on the 26th and the 27th: “My Love”, “Live and Let Die”, “Band On The Run” “Bluebird” and “Jet”. August 30th, the fifth and final day of recording, was a unique staging meant as an interlude segment in the One Hand Clapping film: a solo acoustic performance by Paul in the backyard of Abbey Road studios! Although Paul again drifted through several impromptu takes of a number of classic 1950s rock songs, he did record fairly complete takes of Beatles classic “Blackbird”, the then-unreleased Wings b-side “Country Dreamer” and the as-yet unreleased “Blackpool.” Afterwards, Paul retreated back into Studio Two to track a tight solo piano version of “Eighteen Hundred and Eighty-Five”, which mysteriously morphs into the Band On The Run studio version in the actual unreleased One Hand Clapping film, as well as all known audio recordings.

And that was essentially the last anyone heard of One Hand Clapping, aside from archival releases and bootlegs of varying quality. While the film was completed later in 1975, it was never released; Paul had a tendency to finance vanity projects himself, comfortable with leaving them in the vault, such as the animated Bruce McMouse Show which did not see release until 46 years later! This line-up of Wings eventually returned to Abbey Road in November to start work on their next album, Venus and Mars, recording a handful of songs: “Rock Show”, “Love In Song”, “Letting Go” and “Medicine Jar.” Needing a change of scenery, Wings relocated to New Orleans in early 1975, where Britton exited the Wings due to personal disagreements with the bands’ guitarists. Joe English was hired as a session drummer to finish the album and was later asked to join Wings when the album was completed. Venus and Mars was released in May to critical and commercial success.

But what of the missing live-in-studio One Hand Clapping? Only “Baby Face” received overdubs during the Venus and Mars sessions—a New Orleans jazz band—presumably for possible b-side inclusion. While the film made it’s rounds on the bootleg circuit and eventually as a bonus on the 2010 Band On The Run box set, various tracks have trickled out on archival releases over the years, as well as it’s presumed entirety on various bootlegs. For this reconstruction, we will cull all of these sources and piece together as much as we are able to—including the live between-song banter, which is essential to the spirit of these recordings. All sources from bootlegs have been painstakingly remastered to match the fidelity of the pristine officially-released tracks, and all of the songs are presented mostly in the order of witch they were recorded, as per Chip Madinger and Mark Easter’s excellent Eight Arms To Hold You: The Solo Beatles Compendium. We will also use only the two most complete songs from Paul’s “Backyard Session”, as the goal here is to present a facsimile commercial double LP that could have been released in late 1974 in lieu of a Band On The Run tour.

Disc two begins with “Live and Let Die”, taken from The In-Laws soundtrack. Next is the fantastic studio take of “Soily” that was never released, as well as Denny Laine’s “Go Now” and Paul’s go-to cover, “Blue Moon of Kentucky”, all taken from the Yellow Cat bootleg. We end the side with the final full-band recording of One Hand Clapping, “Bluebird” from the 2010 Band On The Run box. I chose to condense all of the Cabaret Sequence and Backyard Sessions together on Side D, starting with only the Cabaret material shown in the film. Using the bootleg MoMac’s Hidden Tracks Vol 7 as the source for the core, I patched in the proper demo of “Let’s Love” from 2014 Venus and Mars box set, which was presumably recorded during the One Hand Clapping sessions. Ending the sequence is “Baby Face”, again from the 2014 Venus and Mars box, featuring overdubs anachronistically recorded 1975 for this presumed 1974 release. Since nothing from The Backyard Sessions actually made the cut into the One Hand Clapping documentary, I will simply include the two most complete takes of “Blackbird” and “Country Dreamer”, with dialog edited to give the illusion that and random passerby had requested the songs. The album closes with “Nineteen Hundred and Eighty-Five” taken from the 2010 Band on the Run box; instead of segueing into the album version of the “Band On The Run” coda fade, I have used the early live version for continuity.

Special thanks to Mark Heggen for making the awesome cover artwork-- something that One Hand Clapping never had in any iteration!

Posted by soniclovenoize at 1:57 PM 53 comments: