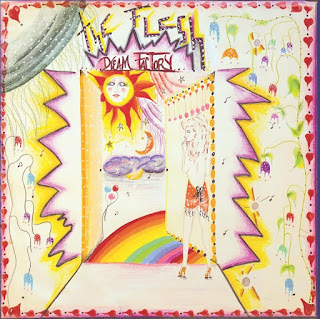 Let’s start 2021 out right, with an upgrade to Prince and The Revolution’s unreleased final album, Dream Factory, which eventually evolved into Sign O’ The Times.  Originally conceived as a double album with a significant amount of creative input from the band (at least compared to previous Prince releases), the album was scrapped after Prince broke up The Revolution in 1986.  Prince then turned his attention to a solo concept album Camille, which was also scrapped and combined with the Dream Factory material to create the unreleased triple album Crystal Ball.  Warner Bros Records then asked Prince to whittle the 3LP down, and the result was the double album Sign o' The Times, which many consider to be Prince’s masterpiece.  This reconstruction attempts to present what Prince originally intended the Dream Factory album to sound like, volume-adjusted and using the best possible masters, mostly sourced from the recent Sign O’ The Times Deluxe Box, a significant soundquality upgrade from bootlegs.  I am also including two bonus discs: a reconstruction of Prince’s unreleased album Camille and a reconstruction of the early, single-disc master of Dream Factory.

Prince was truly the reigning star of the 1980s. Armed with both worldwide smash hits, musical chops and the artistic credibility to back it up, Prince also had the vision and determination to prove himself a modern music legend… But let's not forget he also had the band to back it up. Even though Prince was a great songwriter, producer and multi-instrumentalist who had the ability to mastermind his own works and retain both commercial and critical success, his output throughout the 1980s grew to allow more collaboration from his backing band he formed in 1979. The lineup of The Revolution seemed to be in flux at times, but after the transcendent success of Purple Rain in 1984 and their subsequent albums Around The World in a Day and Parade, the classic core of the band coalesced as guitarist Wendy Melvoin, keyboardist Lisa Coleman, keyboardist Matt Fink, bassist Brown Mark and drummer Bobby Z. In working on the follow-up to Parade before it was even released, Prince invited members of The Revolution—although mostly Melvoin and Coleman—to contribute backing vocals, songwriting, instrumentation and even lead vocals to the material. Reworking older songs as a starting point—the 1982 recordings of “Teacher, Teacher”, “Strange Relationship” and “I Could Never Take The Place of Your Man”—as well as the project's title track in December 1985, most of the work occurred in Prince’s newly built home studio on Galpin Boulevard.  By late April 1986, Prince had created a rough cut of an album called Dream Factory that elevated both Wendy and Lisa as major players (although they later claimed they didn’t receive the credit they thought they deserved!). At this point in time, Dream Factory was a single-disc album that included: “Visions”, “Dream Factory”, “It’s a Wonderful Day”, “The Ballad of Dorothy Parker”, “Big Tall Wall”, “And That Says What?” “Strange Relationship”, “Teacher, Teacher”, “Starfish and Coffee”, “A Place in Heaven” and “Sexual Suicide”.  [A reconstruction of this early configuration is presented as Disc 4]

Work on the album continued throughout the summer with Prince often tracking all the instruments himself, although he also continued to work with Windy and Lisa in the studio. A mountain of tracks began to collect and by June a double album had emerged.  Although songs such as “Big Tall Wall” and “And That Says What?” fell to the wayside, great and interesting new tracks such as “It”, “In A Large Room With No Light”, “Crystal Ball”, “Power Fantastic”, “Last Heart”, “Witness 4 The Prosecution”, “Movie Star” and “All My Dreams” were added to the running order as well as linking tracks “Colors” and “Nevaeh Ni Ecalp A”, the later based around “A Place In Heaven” played backwards and meant to introduce the title track.  Now a double-album, this sequence of Dream Factory went through further refinement over the month when more work was done to the songs. By July, Prince had dropped “Teacher, Teacher”, “In a Large Room With No Light”, “Sexual Suicide” and “Power Fantastic” and replaced them with newly completed tracks “Train”, “Slow Love”, “I Could Never Take The Place of Your Man”, “Sign o' The Times” and “The Cross”. A master was prepared on July 18th and Prince concentrated on the Hit n Run Tour, which would signal the closing of the Dream Factory.

For the summer’s Parade/Hit n Run Tour, The Revolution was expanded to include former members of The Time as well as The Family—jokingly dubbed The Counter-Revolution. This would include a full horn section, Melvoin’s twin sister Susannah (who was romantically involved with Prince) and a set of former-bodyguards-turned-dancers.  This created a strain in the relationship between Prince and his band members, who were questioning Prince’s artistic direction—why did the band nearly double in size? Why are on-stage dancers getting more attention than the musicians proper? Wendy was especially annoyed at the addition of her sister as an official member of the band and most of the core members of The Revolution attempted to quit, only for Prince to convince Wendy, Lisa and Mark to stay until at least the remainder of the tour in October.

As fate would have it, the growing animosity between Prince and his Revolution was at least reciprocated.  At the end of the tour, Prince called in Wendy and Lisa to Paisley Park and fired them; Bobby Z was replaced by Sheila E; allegedly out of loyalty to the rest of his band members, Mark quit.  With The Revolution over, the collaborative Dream Factory was shelved and Prince went back to his roots—being the sole maestro. Prince promptly began work on a concept album called Camille, in which a vocally-manipulated Prince would perform as the character Camille. Intending to fool the public, the album was never to be credited directly as Prince and the cover art was to be blank!  A master to Camille was prepared in October but that album too was scrapped and Prince rethought his strategy. [a reconstruction of the proposed Camille album is presented as Disc 3]

In a bold move, Prince combined the best of both the scrapped Dream Factory and Camille albums into one triple-album entitled Crystal Ball (not to be confused with the 1998 rarities boxset of the same name).  With The Revolution no longer existing, Prince generally mixed-out Wendy and Lisa’s contributions from the Dream Factory tracks destined for Crystal Ball: “The Ballad of Dorothy Parker”, “It”, “Starfish and Coffee”, “Slow Love”, “Crystal Ball”, “I Could Never Take The Place of Your Man”, "The Cross" and “Sign O' The Times”.

In a final turn of events that makes the Dream Factory mythos even more complex, this 3-LP Crystal Ball album was ultimately rejected by Warner Brothers Records, and in December Prince was tasked to pair the album down to at least a more marketable double album. After adding a more commercial single “U Got The Look”, the result was retitled Sign O’ the Times and released as a Prince solo album in 1987. Although not quite hitting the commercial peak that Purple Rain had three years earlier, Sign O’ The Times was universally critically acclaimed and recent revaluations fairly state it as his masterpiece. But to be fair, the album was the culmination of three other scrapped albums—Dream Factory, Camille and Crystal Ball—so it’s glory should come as no surprise. But to truly see how Sign o’ the Times was manufactured, we must first see what it’s like in the Dream Factory.

While there were three different masters of Dream Factory prepared throughout the summer of 1986, the main discs of my reconstruction will focus on its final iteration, using those specific mixes and track sequence.  I will primarily be using the exquisite masters found on the Sign O’ The Times Deluxe Edition, often editing the lengths of some tracks to match what was actually featured on Dream Factory.  If the mix of the song is generally very different (as the case for “Crystal Ball” and “I Could Never Take The Place of Your Man”), then I’ve used the original mixes from the Work It bootleg, EQd to match the officially released final mixes.  Nearly all tracks are either hard-edited into eachother or crossfaded, making four continuous sides of music, as Prince intended.  Additionally, I have reconstructed the original, unreleased Camille album as a bonus, as well as the April single-disc configuration of Dream Factory, for historical purposes.  I chose not to include reconstructions of the June 2LP configuration of Dream Factory nor the unreleased Crystal Ball 3LP, due to excessive overlap between all of the masters.

Side C begins with “Sign O’ The Times”, edited to match the length of the version on Dream Factory, hard edited into the original Dream Factory mix of “Crystal Ball”, taken from the Work It bootleg.  The side concludes Lisa’s vocal version of “A Place in Heaven”, from the SOTT Deluxe.  “Last Heart” opens Side D, taken from Crystal Ball but with some slight reverb tail added to the ending horn passage, followed by “Witness 4 The Prosecution” from the SOTT Deluxe.   “Movie Star” is next, vying for the slightly-shorter mix from “Crystal Ball” rather than the commonly bootleged original mix for the sake of soundquality; while the intro has been edited, it is unfortunately missing four bars of bridge that Prince had cut out for the Crystal Ball compilation and we’ll have to live with those missing few seconds.  The album concludes with the double-punch of “The Cross” and “All My Dreams” from the SOTT Deluxe.  The final touch is Susannah Melvion’s actual sketch of the Dream Factory’s cover art, commissioned by Prince himself; here we see Susannah opening a door into the Dream Factory: Prince’s imagination.

For a purely historical interest, I have included reconstructions of Camille and the single-disc April configuration of Dream Factory as Discs 3 and 4.  Camille begins with “Rebirth of the Flesh” from SOTT Deluxe, but I have re-edited it to match the version originally appearing on Camille.  “Housequake” and the final SOTT mix of “Strange Relationship” follow, with the side ending with “Feel U Up,” the rare 6-minute version found only on the Partyman single.  “Shockadelica” from SOTT  begins Side B, with “Goodlove” from the Bright Lights Big City soundtrack and “If I Was Your Girlfriend” from SOTT but with it’s intro edited out.  Concluding is “Rockhard in a Funky Place” from The Black Album.

Posted by soniclovenoize at 3:45 PM 42 comments: