The Beach Boys - Landlocked (and friends) 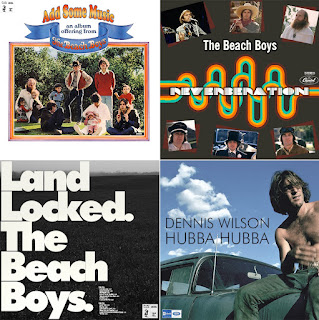 Here is a massive update for you!  This is a reconstruction of The Beach Boys’ mythical unreleased 1970 album Landlocked, which was the precursor to their comeback album Surf’s Up.  Included are two bonus reconstructions that date from the same era—Add Some Music and Reverberation, both precursors to Sunflower—and Dennis Wilson’s unfinished 1971 solo album Hubba Hubba.  Most of the sources are taken from the new Feel Flows box set, so sound quality is superb.

The Beach Boys were a band of true ups and downs.  From pioneering baroque-pop in the mid 1960s which coalesced into Pet Sounds and SMiLE, to pioneering lo-fi pop towards the end of the decade with Smiley Smile and Wild Honey, the band also saw their share of commercial waves.  By 1969, The Beach Boys were struggling to keep up with the times,  their de facto bandleader Brian Wilson succumbing to his own mental illness and self-imposed isolation.  After the relative failure of the 20/20 album and being released from their contract with Capitol Records, the group circled their wagons and doubled down to work together and record a comeback album worthy of their mid-60s output, to be released on their own label Brother Records.

With all six band members contributing their own material to the new album project, The Beach Boys began recording in January 1969 with: Dennis Wilson’s “San Miguel”, “Got To Know The Woman”, “Celebrate The News” and “Forever”; Bruce Johnston’s “Deidre”; Brian Wilson and Al Jardine’s collaboration “Loop de Loop”; Brian and Mike Love’s “All I Wanna Do”; and Brian’s own “Breakaway”.  The later was chosen as a single release backed with “Celebrate The News”, released for the band’s own European tour in June.  Reconvening that summer, the band recorded Dennis’s “Slip On Through”, Brian’s “Soulful Old Man Sunshine” and Al’s requested Country re-arrangement of “Cottonfields”.  That fall and into January saw a sudden explosion of new recorded material after receiving interest from Warner Brothers/Reprise Records: Brian’s “Games Two Can Play”, “This Whole World” and “I Just Got My Pay”; Brian & Mike’s “Add Some Music To Your Day” and “When Girls Get Together”; Brian & Al’s “Our Sweet Love”, “At My Window”, “Susie Cincinnati”, “Good Time”, “Take a Load Off Your Feet” and “Back Home”; Bruce’s “Tears in the Morning”; Dennis’s “Lady”; and the group’s psychedelic take on “Over The Waves (Carnival).”

By February 1970, The Beach Boys had an unfathomable amount of new material,  consisting of the eight songs recorded before the European Tour and seventeen recorded afterwards!  Of those 25 tracks, 12 were selected for the new album—now titled Add Some Music—and a master was prepared on February 18th.  Unfortunately, Warner Brothers rejected the album, although they did elect to release the title track “Add Some Music To Your Day” b/w “Susie Cincinnati” as a single and suggested the band rethink the album itself.  Meanwhile, Capitol Records was still interested in a final release from The Beach Boys.  After a summer tour of Australia and a single release of their reworked and countrified version of “Cottonfields”, the band compiled a completely separate album called Reverberation (sometimes also known as The Fading Rock Group Revival), using ten of their recent 1969 recordings not used for Add Some Music (as well as new stereo mix of their 1963 recording of “The Lord’s Prayer”).  Capitol rejected the album for unknown reasons, instead choosing to release Live in London.  This was for the best.

With urging by legendary record executive Larry Waronker, The Beach Boys reconvened in June to record “It’s About Time” and “Cool Cool Water”, the later which had been worked on during the SMiLE, Smiley Smile and Wild Honey sessions.  A completely new album was created by combining the two new songs, six songs from the rejected Add Some Music and four from the rejected Reverberation.  This new album—Sunflower—was released in August and although it was one of the strongest albums The Beach Boys had released since Pet Sounds, it flopped.  The band needed a facelift…

In August 1970, The Beach Boys hired Jack Rieley as their new manager, who set out to revamp and modernize the band’s image for the 1970s.  Hitting the studio, the band started recording new material for their second Brother Album release: Al’s “Lookin At Tomorrow”; Mike’s “Big Sur”; and Brian’s “HELP is On the Way” and “Til I Die”.   In September, Beach Boys’ house engineer Stephen Desper compiled a thirteen-track master with these four new songs and nine of the 1969 tracks not used on Sunflower, meant as a compilation of songs in consideration for the next album.  Unfortunately, Warner Brothers was again not thrilled with the compilation, and The Beach Boys once again went back to the drawing board.

Regrouping in the Spring of 1971, The Beach Boys recorded a new set of songs all the way up into the summer—tentatively called Landlocked—again pooling their collective resources: Dennis’ “4th of July” and “(Wouldn’t It Be Nice To) Live Again”; Mike & Al’s “Don’t Go Near The Water”; Mike’s “Student Demonstration Time”; Carl’s “Long Promised Road” and “Feel Flows”; Brian’s “A Day In The Life of a Tree”; Bruce’s “Disney Girls (1957)”.  Simultaneously, Dennis was recording his own material with Daryl Dragon of Captain & Tennille for a tentative solo album called Hubba Hubba (or, absurdly, Poops).  Finally, Rieley persuaded the group to finish Brian’s incomplete recording of the SMiLE track “Surf’s Up” to act as the centerpiece for the album.  A completely new master was prepared with the meat of the 1971 sessions, “Til I Die” and “Lookin At Tomorrow” from the 1970 sessions and curiously “Take a Load Off Your Feet” from the 1969 sessions.  Retitled Surf’s Up, the album was released in August to critical success, deemed as The Beach Boys’ 1970s comeback and reinvention album.  But as we’ve seen, this long promised road yielded a number of bumps.  Can we recover these lost precursors to Sunflower and Surf’s Up?

First thing’s first, the elephant in the room:  There was most likely no actual Landlocked.  Or more specifically, the unreleased album that is attributed to Landlocked is not actually Landlocked;  Landlocked was simply a working title for Surf’s Up.  The 13-song master attributed to the name was simply the compilation Desper assembled in September 1970, showcasing the four then-new songs and the nine Sunflower outtakes considered for the second Brother album.  Regardless, we will honor this mythos and simply reconstruct Desper’s compilation and call it Landlocked.   The reconstruction opens with the original 1969 mix of “Loop de Loop”, taken from Feel Flows.  The excellent modern remixes of “Susie Cincinnati”, “San Miguel” and “HELP is On The Way” from Feel Flows follows, then the album version of “Take a Load Off Your Feet” from the 2012 remaster of Surf’s Up (which I feel was better than the Feel Flows remaster).  “Carnival” from Feel Flows is next, but I have added the dizzying phasing that replicates a carnival ride, which was present on it’s bootlegged 1969 mix but not in this modern one.  New Feel Flows mixes of “I Just Got My Pay”, “Good Time” and “Big Sur” follow, along with the original 1969 mix of “Lady”.  The album concludes with a new Feel Flows mix of “When Girls Get Together”, “Lookin At Tomorrow” from the 2012 Surf’s Up, and Desper’s alternate 1970 mix of “Till I Die” from the Endless Harmony soundtrack.  The cover artwork is reconstructed from Jack Rieley’s own description of the unreleased Landlocked album cover, as well as unused promotional proofs.

Full disclosure: I love this reconstruction of Landlocked, moreso than the actual Surf’s Up album!  This album doesn't take itself so seriously, and features an exuberant sound texture reminiscent of SMiLE.  Because of this fact, Landlocked is the heart of this reconstruction, and it’s related Beach Boys albums that never were (the ‘friends’) are assigned as bonus discs.  Disc Two reconstructs the February 18th, 1970 master of Add Some Music, with all Sunflower tracks taken from it’s (superior) 2012 remaster with the remainder from Feel Flows.  My cover art is based upon the actual unreleased cover art for Add Some Music (which was simply reused for Sunflower anyways).

Disc Three reconstructs the June 19th, 1970 master of Reverberation, although I have made a few modifications to tie up it's loose ends: we will use the new stereo mix of “Cottonfields” from Feel Flows, as opposed to a duophonix mix; “Got To Know The Woman” is the standard stereo version from Sunflower as opposed to a mono mix; “When Girls Get Together” is the full remix from Feel Flows, rather than an instrumental version; “The Lord’s Prayer” is the proper stereo mix from Hawthorne, California, as opposed to a duophonic mix.  The rest of the songs are sourced from either the 2012 Sunflower or Feel Flows, except for the stereo remix of “Breakaway” from Made In California.  The cover art is my own creation.

Disc Four is the real bonus here: my reconstruction of Dennis Wilson’s unfinished solo album Hubba Hubba (or Poops, if you will), recorded during the making of Surf’s Up.  Using the material from Feel Flows, as well as “Make It Good” from So Tough and “(Wouldn’t It Be Nice To) Live Again” from Made In California, I have assembled the material recorded during the 1971 sessions with Daryl Dragon (which thus excludes the 1970 single of “Sound of Free” and “Lady”) and organized them into two continuous suites of music for each side of the LP—which is what I believe Dennis and Daryl intended.  The result is half instrumental, but it gives you a clue as to what the pair were going for and what could have been.  The cover art is my own creation.

Posted by soniclovenoize at 5:40 AM 52 comments: