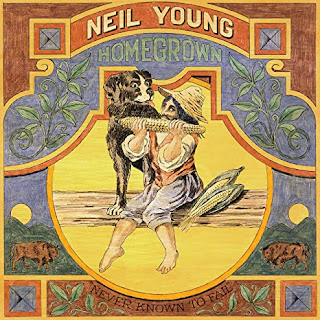 This an oft-requested upgrade of one of my favorite albums that never were. This is a reconstruction—actually, more of a re-imagining, really—of Neil Young’s famous unreleased 1975 album Homegrown. Originally meant to be released in 1975 as the proper follow-up to On The Beach, it was shelved in favor of the more electric and immediate Tonight’s The Night. While the album was finally released in 2020 as a part of The Archive Volume 2 project, many fans complained that the album was not what they had imagined or what it could have been; some even seemed to like my own reconstruction better than the actual release! So this is an upgrade to my original reconstruction using the newly-released sources, swapping some tracks for others to make Homegrown actually live up to it’s own hype as the stark, acoustic record that was the successor to Harvest.

Neil Young has always been a man on the edge, a troubadour who embraced his inner-turmoil.  This was a characteristic that informed his music and ensured a long-lasting artistic integrity.  Presented with mainstream success that outshined his previous musical outlets with several hits from his 1972 album Harvest, Neil Young choose to intentionally follow-up the album’s commercial acoustics with more abrasive and difficult material to challenge his newly horizoned audience.  The subsequent albums were called “The Ditch Trilogy”, formed by 1973’s Time Fades Away, 1974’s On The Beach and 1975’s Tonight’s The Night.  All three projects shared the theme of loss and how Young dealt with it emotionally, as Young lost three of his closest confidants in the course of making the albums.  But “The Ditch Trilogy” is a misnomer, as it should have been the Ditch Tetralogy: the fourth and final recorded project during Young’s turbulent 1972-1975 era remained in his vault, as it not only was too personal, but the sound of the album was too reminiscent of Harvest, the album he strove to shy away from.  Regardless, it is the quintessential Ditch album, the final word of that era, although it was never actually heard.

After being fired from Crazy Horse years earlier, Young had given guitarist Danny Whitten a second chance with a rhythm guitar spot in his backing band The Stray Gators for the upcoming Harvest Tour.  Unable to perform competently due to his rampant alcoholism and heroin addiction, Young fired Whitten a second time.  Within 24 hours, Whitten was dead, overdosed on alcohol and Valium.  The effect on Young was immense, as he felt he was responsible for Whitten’s death.  The initial outcome was Time Fades Away, recorded live on the subsequent tour, mere months after Whitten’s death.  The sloppy sound of anguish and denial—an artist in mourning with an inebriated backing band—Young has since regretted the album, possibly due to the sound quality of the album, recorded live by very early digital technology.  Time Fades Away exists solely as a document of this troubled time in Young’s career, which was only strengthened by an additional subtext of the tour: Young was growing apart from his wife Carrie Snodgress, the muse of his Harvest.  The freedoms of a rock star’s wife did not seem to gel with the pressures of a grieving and overbooked rock star, and the two became distant.

A brief interlude from the turmoil occurred as a hopeful writing and recording session with a reunited Crosby, Stills, Nash & Young in mid-1973, resulting in the genesis of the Human Highway project (which was also reconstructed on this author’s blog).  Unfortunately, a second casualty temporarily ceased the project, as Neil Young and CSNY’s long-time roadie Bruce Berry overdosed on heroin, a habit that was introduced to him by none other than Danny Whitten.  Leaving Crosby, Stills and Nash to their own battling egos, Young recorded possibly the rawest and most anguished recording of the 1970s, Tonight’s The Night, between August and September.  A painful ode to both Whitten and Berry, the album was perhaps too raw and Young sat on the completed recording for the remainder of the year while road-testing the material, toying with the mixing and sequence, finding the best way to release the album.  This cathartic tour for a soon-to-be-released record became a stereotype for rock band excess, and as Snodgress later recollected, was the beginning of the end of her marriage with Young.

With a more-or-less completed album in his back pocket and a slew of even newer songs, Young returned to the studio in February 1974 and recorded the third of his Ditch Trilogy, On The Beach. While more refined than the previous Ditch albums, anguish still loomed over the songs while still soaked by the drug excess of the previous year’s tour. With Young both emotionally and physically absent, the lonely and hungry eye of the rock star’s wife looked in other directions; surely he had taken other lovers while on the road, why couldn’t Carrie? As the album was being released, Young's realization that Snodgress had been cheating on him unleashed a flurry of new songs about their disintegrating relationship and the break-up of their family. Young was given a surprise opportunity to road-test his new material with a re-reunited CSN&Y, on a much-hyped national tour through the rest of 1974 that the band later called “The Doom Tour”. During June rehearsals for the tour, Young recorded acoustic takes of a number of his new laments, including: “Love/Art Blues”, “Barefoot Floors”, “Homefires”, “Love is a Rose” and “Pardon My Heart”. Neil also recorded as an acoustic backstage duet with The Band’s Robbie Robertson on another of his new compositions “White Line” in September.

The miserable CSNY tour ended that fall, and Neil was free to record the bounty of material he had for a new album. Beginning at his own Broken Arrow Ranch in November, he tracked the acoustic “Frozen Man”, “Give Me Strength” and “Bad News Come To Town”. Moving to Quadrafonic Sound Studios in Nashville in December, Young tracked a number of songs with a full band, with a decidedly Western-sounding Harvest-esque full band: “Love/Art Blues”, “The Old Homestead”, “Daughters”, “Separate Ways”, “Try”, “Star of Bethlehem”, “Deep Forbidden Lake” and the scant title-track “Homegrown”. At the end of the year, Neil tracked two more at Broken Arrow, the jam “We Don’t Smoke It Anymore” and the hard-edged “Vacancy”, which was also recorded acoustically in November. Perhaps thinking the album needed a final touch, Neil recorded several more songs at The Village Recorder in January 1975, rather desolate and hallucinogenic tracks “Florida”, “Mexico”, “Kansas” and “Little Wing.” Neil compiled a twelve-song master from the nearly thirty tracks recorded over the last six months and prepared it for release that summer.

While Young was uncertain about releasing Homegrown because of its brutal honesty—he even claimed he couldn’t sit through the entire album—the label was excited for Young’s return to a more delicate sound after his recent abrasive albums. But in typical Neil Young fashion, that was never to be. In the oft-repeated story, Young previewed Homegrown to a party of friends; after the album finished, the rough cut of Tonight’s The Night—still unreleased from 1973's work—played afterwards. More impressed by the later work, The Band bassist Rick Danko suggested to release Tonight’s The Night instead of Homegrown. And that is exactly what Young did that June of 1975 and Homegrown remained unreleased for 45 years, finally getting an archival release in 2020.

In the meantime, only a handful of the various songs from the Homegrown sessions had been released over the years, wetting fan’s appetites for what was mythicized to be Neil Young’s strongest and most emotionally vulnerable album; homemade Homegrowns—including my own approximated reconstruction—only fueled the homefire. Upon it’s eventual release, some fans were a bit disappointed—this wasn’t quite the stark, acoustic successor to Harvest they expected! While I don’t know if I necessarily agree or disagree with that statement, I was interested in upgrading my cut of Homegrown using the newly-released tracks. This re-imagination of Homegrown is neither meant to replace or improve Neil’s actual master; it is simply an improvement of my original cut of Homegrown, which a number of listeners seemed to have enjoyed. All sources are from Archives Volume 2, and follow the same template of my original cut: the album alternates between full-band and solo songs, trying to keep the “Stark, acoustic” vibe as much as possible. I have swapped out some of the songs to improve the album, and have chosen to almost exclusively use the songs about Neil’s divorce and the difficulties of being a touring musician.

My cut of Homegrown opens not with the title track, but similarly as the official version: “Separate Ways”, which in my opinion was an unheard classic Neil Young song. Staying true to my original cut, this is followed by “Little Wing” and “The Hold Homestead.” Next is “Frozen Man”, an amazingly honest track and one of the gems of this era. Ending side A is of course the title track “Homegrown”, here utilizing the Country-Funk version from the actual sessions rather than the later Crazy Horse version. Side B opens with “Star of Bethlehem”, followed by “Love is a Rose.” Next is “We Don’t Smoke It”; while some may question my choice here, I felt that the album needed the dynamic and emotional shift, which is a standard fare on Neil Young albums. My personal favorite, the proper studio version of “Give Me Strength”, follows. In this upgrade, we drop “Deep Forbidden Lake” and “Pardon My Heart” for the fantastic “Vacancy”, but close the album similarly with the proper studio version of “White Line”.

Posted by soniclovenoize at 3:55 PM 40 comments: