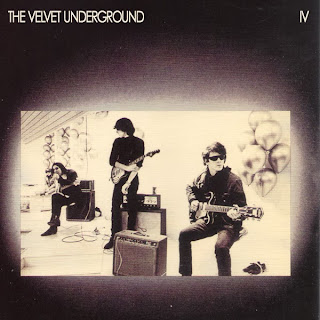 As a memorial to the death of Lou Reed today, I thought I’d rush this mix and post it immediately.  This is a reconstruction of the fabled ‘lost fourth album’ by The Velvet Underground, recorded in-between 1969’s The Velvet Underground and 1970’s Loaded.  Although much of this material has been released as the 1985 compilation album VU, the label made no attempt to reproduce that lost fourth album.  In contrast to VU, this reconstruction attempts to be true to what the actual fourth Velvet Underground might have been like.  I also utilized alternate sources of the songs from those contained on VU in order to include the longest edits of the songs as well as the best mastering available.

By 1969, we have a completely different Velvet Underground.  After recording an album intended to be the polar opposite of White Light/White Heat with John Cale’s more musically apt (albeit less experimental) replacement Doug Yule, the band enjoyed critical success with their The Velvet Underground album, even though commercial success still eluded them.  Being tired of MGM Records—or perhaps reading the writing on the wall and anticipating a drop from the label due to a lack of commercial potential—the band continued recording a follow-up to The Velvet Underground while touring throughout 1969, biding their time until their management found a better label.  This follow-up, once complete, was indefinitely shelved by MGM as The Velvet Underground was no longer on their roster anyways.   It remained unheard until the tapes were accidentally found and released as the 1985 and 1986 compilation albums VU and Another View.

Recorded at The Record Plant from May to October 1969, the actual band members have differing opinions on what the intent of these recordings was.  In interviews, bandleader Lou Reed expressed that the 1969 Record Plant recordings were meant for their fourth album—specifically noting that “We’re Gonna Have A Real Good Time Together” was meant as it’s ironic lead single.  Mo Tucker sides with Reed, in that she was under the impression they were recording a proper forth album, although she confusingly claims that The Record Plant recordings found on VU and Another View were not it.  Doug Yule however claimed they were simply professionally-recorded demos for the album that would eventually be Loaded.  Sterling Morrison offers a completely different explanation: that the recordings were simply “busy work”, a put-on so that MGM would not suspect the band as wanting out of their contract, and that these recordings were never even meant to see the light of day.   Who are we to believe, if we believe any of this at all?

For the purposes of this reconstruction we will assume Reed and Tucker to be correct, and collect the Record Plant sessions into this album they were purportedly recording.  We will also need to assume that Tucker is mistaken, and that The Record Plant sessions were indeed the lost album; 40 years later, what else possibly could it be?  Had they recorded an undocumented album’s worth of material that somehow escaped Velvet Underground historians for decades?  Unlikely…

While we don’t know what exactly would have been on the “lost forth album”, we do have fourteen finished songs, recorded at a state-of-the-art recording studio from the exact same time period in question.  Seems more than a coincidence!  While the 1985 album VU also includes the unreleased single “Stephanie Says” and “Temptation Inside Your Heart”, we must resist the temptation inside our hearts (no matter what Stephanie says) to include these two songs as they were most likely not a part of this project.  Of the fourteen tracks recorded in 1969, we will exclude the early version of “Rock and Roll”, since it later appears on Loaded; in contrast, although both “Ocean” and “I’m Sticking With You” were re-recorded for Loaded, they did not make that final cut and are thus free-game.  With thirteen songs remaining, I simply dropped the two weakest tracks—the unnecessary filler “Ferryboat Bill” and the long and uninteresting “I’m Gonna Move Right In”.  The result is eleven solid tracks that run nearly 40 minutes: the typical format for a Velvet Underground album!

Side A begins with Reed’s idea of an ironic and intentionally-inane single designed specifically to ‘give FM radio what it wants’, “We’re Gonna Have A Real Good Time Together”.  Although Reed later re-recorded this unreleased song for his 1978 solo album Street Hassle, this is the original Velvet Underground version taken from Another View.  Following is the barroom snarl of “One of These Days”; this is the longer version found on the What Goes On boxset, that runs about five seconds longer than the typical VU version.  “Andy Chest”, a song Reed re-recorded for is classic 1972 Transformer album, follows and is taken from the CD pressing of VU.  “Lisa Says” follows, a song Lou re-recorded for his first solo album; it is taken from the Peel Slowly and See boxset, which runs three seconds longer than the typical VU version.  Concluding Side A is my own edit of “Foggy Notion”, the first of two necessary ‘epic’ songs on a Velvet Underground album.  This reconstruction attempts to make the longest possible complete version by using the guitar intro from the vinyl pressing of VU and the longer-fade mix found on the What Goes On boxset.  This “Foggy Notion” is now as long and complete as possible, clocking in at 7:00 as opposed to the 6:45 version on VU.

Side B starts with a song Reed again re-recorded for his first solo album in 1972, “I Can’t Stand It”, here using the best master found on What Goes On.  After “Coney Island Steeplechase” from Another View, the longest version of “I’m Sticking With You” is taken from Peel Slowly and See, in which the final chord of the song is more articulated.  A song re-recorded by Reed for his 1976 solo album Coney Island Baby, “She’s My Best Friend” is the long version taken from the promo cassette pressing of VU which runs 19 seconds longer.  The second necessary epic of the album, we have the superior master of another song re-recorded for Reed’s first solo album: “Ocean”, which is taken from What Goes On.  The album concludes with a serene What Goes On version of “Ride Into The Sun” that actually features vocals, unlike the common Another View version.  While they were clearly recorded at the same 1969 studio session (mislabeled on the What Goes On liner notes), this version is unfortunately sourced from an old acetate rather than the remixed mastertapes.  The result is that, while definitely listenable and certainly enjoyable, “Ride Into The Sun” has a very obvious lower soundquality than the rest of the album.  But is that really a problem?  After all, we are talking about The Velvet Underground here!  This acetate sounds as good as half of the songs on White Light/White Heat!  This rougher acetate version seemed a perfect fit to conclude the album, not to mention it's one of the best recordings the band ever made.

The resulting album reconstruction—which here I simply titled IV as it would have been The Velvet Underground’s fourth album—lies somewhere between the band-oriented garage-rock of White Light/White Heat and the serene pop sensibilities of The Velvet Underground.  Without any pretense at all ("Are we even making an album right now?  Oh well..."), it is a very clear recording of the band playing directly, something they needed at this point of their career, although no one actually did hear it at this point in their career.  But let's not fool ourselves; if they had, I doubt it would have made much of a difference anyways.  The Velvet Underground's fate was always sealed to be ahead of their time.  But now that that time has passed, we can appreciate the simple beauty of a very honest Velvet Underground album previously lost, as we celebrate Lou Reed’s ride into the sun.