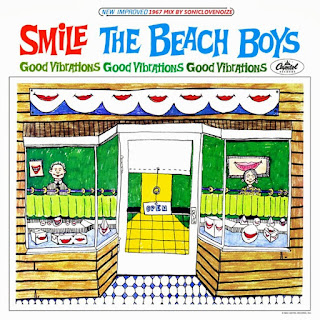 Merry Christmas and happy Holidays!  This is an UPGRADE to my reconstruction of The Beach Boys SMiLE album.  For this special occasion, I offer a special three-disc set...  Disc 1 contains the standard, upgraded mono and stereo versions of my SMiLE ’67 Mix, which attempts to recreate what the SMiLE album would have sounded like in 1967.  Disc 2 contains an all-stereo, all-Beach Boys version of SMiLE, structured in three movements just as 2004’s Brian Wilson Presents SMiLE; as a bonus, it also contains several vintage Brian Wilson mixes—mostly a reconstruction and remaster of Brian Wilson’s December 1966 Comp Reel, his first attempt to compile a series of SMiLE era mixes.  Disc 3 contains an hour of custom-made bonus material and reconstructions meant to showcase the making of the album—Behind The SMiLE.

The upgrades in this December 2018 edition of SMiLE ’67 are:
- Remade “Child is Father of The Man” which follows the structure of Brian Wilson’s vintage three-minute 1966 test edit (both mono and stereo).
- Remixed “Cabin Essence” (stereo).
- Remade “The Old Master Painter” using the correct take 11 as the core of the song (stereo).
- Remade “The Elements” to be a completely self-contained track, separate from “Wind Chimes”, “Vege-Tables”, etc (both mono and stereo).
- All tracks banded as twelve separate, uncrossfaded songs, as per Van Dyke Parks.
- SMiLE 2004 reconstruction is updated with aforementioned sources and included on Disc 2
- Creation and inclusion of Disc 3, Behind The SMiLE, as well as remastered Brian Wilson vintage mixes on Disc 2

* See included essay ‘Behind The SMiLE’ for specific song, recording and argument information.

Much has been written about the unreleased album SMiLE; even more so in recent history due to The SMiLE Sessions boxset.  The first disc of that set was purported to be an accurate reconstruction of what SMiLE would have been.  But is it so?  Most likely not: the tracklist is based upon the sequence found on Brian Wilson’s 2004 solo album Brian Wilson Presents SMiLE, in which the great artist finally “finished SMiLE”.  Well surely, that was how SMiLE was supposed to sound?  Again, most likely not: that sequence was devised by The Brian Wilson Band musical director Darian Sahanaja for the purpose of the previous year’s SMiLE Tour, as an interesting live performance that showcased all of the known and popular SMiLE tracks.  Furthermore, his vision of SMiLE seemed to be greatly influenced by sequences found on known bootlegs in the 1990s as well as fan fiction on their own SMiLE mixes.  As a matter of fact, Brian Wilson himself has admitted that what we think of as the “finished SMiLE” is not what it would have sounded like in 1967; Wilson himself didn’t even know what it would have sounded like, even in 1967!  By spring 1967, the album itself was abandoned and he focused on two songs for a single release (“Heroes and Villains” and “Vege-Tables”) and the structure of those two songs changed from day to day!

How could we possibly assemble something that Brian Wilson himself couldn’t?  Fans and SMiLE aficionados have been spending the last 40 years making their own SMiLE mixes, so it’s not an unreachable dream.  After over fifteen years of research, I believe I have found a method to make an extremely educated guess to what the album contained and how it was structured.  First and foremost, I offer that SMiLE would have been a singular, two-sided album of twelve banded pop-songs, just as Pet Sounds was; not three conceptual suites or movements; it would not have been a three-movement suite as it exists today.  As much as we won’t want to imagine it, SMiLE is just an album.  Anything more might be succumbing to mythos.

But of all the many pieces recorded for SMiLE, what would be included?  Our first clue is found in a handwritten tracklist addressed to Capitol Records, which was used to manufacture LP mock-up artwork for the album.  The tracks included, in this order: “Do You Like Worms?”, “Wind Chimes”, “Heroes and Villains”, “Surf’s Up”, “Good Vibrations”, “Cabin Essence”, “Wonderful”, “I’m In Great Shape”, “Child Is Father Of The Man”, “The Elements”, “Vege-Tables” and “The Old Master Painter”.  Any listener who can make a playlist will know this is a terrible track sequence for an album; there is no flow or cohesion and the two sides do not time-out correctly!  My theory is that this was not the specific intended track order of the album, but instead a shortlist of the songs that would be on the final album; note that the more completed songs are listed first and the most ‘under construction’ songs listed last.  Thus certain SMiLE staples not included on the list such as “Look”, “He Gives Speeches” or “Holidays” would be excluded from the final running order of an authentic 1967 SMiLE.  The one exception is “Our Prayer”, used as an (uncredited) opening track outside of the twelve, which was Brian Wilson’s intention at the time.

The next step is to “finish” each of the twelve songs as close to how Brian Wilson envisioned the songs in 1966-1967.  Some already exist as finished mixes (“Wonderful”, the ‘Cantina Version’ of “Heroes and Villains”), while we have vintage test edits for others to base a reconstruction off of (“Do You Like Worms?”, “Wind Chimes”, “Child is Father of The Man”).  We will have to make educated guesses for the remainders based on primary sources and session information (“I’m In Great Shape”, “The Elements”).  Also note, no anachronistic digital “fly-ins” were used to complete songs; in my view, leaving some songs unfinished seemed more authentic than using sound elements recorded in 2004.  Finally, we will organize these twelve songs into two sides of an LP, unbanded (unconnected or unsegued) with each side beginning with a ‘hit’ and each side closing with an ‘epic’.

Side A of my SMiLE ’67 begins with “Our Prayer”, just as instructed by Brian Wilson on session tapes.  My mono mix uses the version from The SMiLE Sessions and stereo from Made in California.  It segues directly into the ‘hit’ of side A, “Heroes and Villains”.  Here we use what is called ‘The Cantina Version’, the mix of the song prepared by Brian on February 10th, 1967—what I believe is the version of the song truly intended for SMiLE; both mono and stereo versions taken from The SMiLE Sessions.  Next is also what follows on the Smiley Smile album: “Vege-Tables”.  My construction removes the third verse as I thought it was lyrically redundant and disrupted the gradual ‘winding-down’ flow of the song.  The mono mix is edited from The Smile Sessions and stereo mix edited from Made in California.  My own unique construction of “Do You Like Worms?” follows, based on Brian Wilson’s test mixes from December 1966.  Note that in my stereo mix—created from syncing the isolated vocals to the assembled backing tracks—the tack piano of the ‘Bicycle Rider’ theme pre-chorus travels stereophonically from right to left, reminiscent of the pilgrims and pioneers moving across America during the Western Expansion—who The Bicycle Rider presents!   All sources edited from The SMiLE Sessions.

Side B opens with the ‘hit’ of this half of the album, as it did on Smiley Smile: “Good Vibrations”, both mono and stereo mixes from the 2012 remaster of Smiley Smile.  Next is “Wonderful”, mono mix sourced from The Smile Sessions.  The stereo mix features the master from the 1993 Good Vibrations box set synced up with the isolated backing vocals from The Smile Sessions.  “I’m In Great Shape” is one of the many unsolved mysteries of SMiLE, and probably always will be.  Here we presume it to be the four-part ‘Barnyard Suite’ Brian alluded to in the 1970s, using “I’m In Great Shape” and “Barnyard” as its base; it is completed with “I Wanna Be Around” and “Friday Night”, both labeled as ‘Great Shape’ on their tape box and who also feature a slightly farm-like theme.

Next is “Wind Chimes”, edited from the mono on The Smile Sessions and stereo edited from Made In California, but restructured to match Brian Wilson’s 1966 test edits.  Following is “The Elements”, a hotly-debated subject of SMiLE Lore.  Here we will create a self-contained piece that covers all four Elements without overlapping with previous songs (“Wind Chimes”, “Vege-Tables”, etc).  Fire is represented by the ‘Firetruck’ Intro to “Heroes and Villains”, crossfaded into “Mrs. O’Leary’s Cow” and concluding with the fire sound effects from the session; Earth is represented by the percussive “I Love to Say Dada – part 1” that brings peddles and rolling rocks to mind and concludes with vegetable chants from Psychedelic Sounds; Air is represented by “Second Day”, with its flute conjuring up images of the breeze and concluding with wheezing chants from Psychedelic Sounds; Water is represented by “I Love To Say Dada – Part 2”, it’s treated piano reminiscent of running water and concluding with underwater chanting from Psychedelic Sounds.  Finally, SMiLE concludes with the song Vosse stated was to end the album: “Surf’s Up”, mono and stereo taken from The SMiLE Sessions.

If you find this reconstruct a bit hard to swallow, I don’t blame you; fifty years of SMiLE mythology has very much overshadowed the facts; hype has become reality.  So on Disc 2, I have also included an updated version of my all-stereo reconstruction of SMiLE based on 2004’s Brian Wilson Presents SMiLE.  If you feel that was how SMiLE should be, well, here it is!  Following are a set of bonus tracks, my own remaster of Brian’s original December 1966 Comp Reel, his first assemblage of SMiLE era mixes. Also included is my remaster of Brian’s test edit of “Vege-Tables”; not originally a part of the reel but is included for historical relevancy.

But the real fun can be found on Disc 3, Behind The SMiLE.  Meant as a ‘making-of’ audio documentary, it is an assemblage of stereo backing tracks, alternate versions and possible variations.   Included are what I call ‘chronological reconstructions’, in which the many modulations of a specific song are organized in the order of when they were recorded.  In effect the listener can understand Brian Wilson’s ideas for a given song in real time.  Behind The SMiLE is also meant to be listened along with the included Behind The SMiLE essay, which includes recording notes for each song.

Posted by soniclovenoize at 6:03 PM