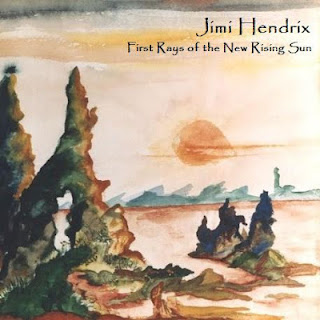 
AS OF NOVEMBER 2014, THIS MIX RECONSTRUCTION WAS UPDATED
GO HERE FOR THAT

From November 1969 to August 1970, Jimi Hendrix set out to record the follow-up to his psychedelic odyssey Electric Ladyland.  At first utilizing his Band of Gypsies line-up of bassist Billy Cox and drummer Buddy Miles, Mitch Mitchell was later brought back behind the kit and the trio recorded an abundance of material in various states of completion over those 10 months.  The songs had a decidingly funkier tone than Hendrix’s previous psychedelic and hard rock explorations, and were heavily influenced by R&B and soul as well as heavy psyche-rock.  Jimi Hendrix’s fourth studio album was to be a double-LP, called First Rays of The New Rising Sun.

Unfortunately that never happened as Hendrix passed away in September 1970, leaving the album half-finished.  After gaining control of Hendrix’s catalog, producer Alan Douglas gathered the unfinished tracks and released them posthumously, sprinkled across a number of bastardized Hendrix releases over the next few years.  The majority of the tracks were released on 1971’s The Cry of Love, with a few more that year on Rainbow Bridge, War Heroes and Loose Ends in 1974.  And there the songs remained, uncollected as the final masterpiece he had originally intended.  That is until 1997 when The Hendrix Estate gained control of the original master recordings and compiled the material as their take on Jimi’s unreleased masterpiece First Rays of The New Rising Sun.  But through improper song choice and sequencing, terrible brickwalled and clipping mastering and cheesy Photoshop cover art, Hendrix aficionados pointed out that the album still missed the mark, even under the guise of being official.

This is an attempt to recreate what would be Jimi Hendrix’s final album, First Rays of The New Rising Sun.  The track sequencing and song selection follows closer to what is believed Hendrix intended, and attempts to be true to his artistic vision in 1970 based on recording histories, interviews and handwritten tracklists.  Also, all tracks are taken from alternate sources to avoid the clipping, over-compressed mastering found on the 1997 official release, using mostly vinyl rips of original 1971 pressings.  All tracks are tightly crossfaded into four continuous sides of music, as Hendrix might have had intended.

How do we know what would have been on First Rays of The New Rising Sun?  Realistically, we don’t.  But there are a number of clues which Jimi has left us, in which we can make a very educated guess.

First off, a note about the sources used:  One of the disheartening points of the 1997 release of First Rays of The New Rising Sun was the over-the-top, super-compressed mastering, in which all tracks clip numerous times throughout the song, hiding certain frequencies and decreasing the dynamics overall.  All sources on my reconstruction are from high-quality transfers of the original vinyl pressings.  In comparison, these mixes are cleaner and more pristine than the modern CD release, vinylhound’s rips being extraordinarily excellent.  The only exception is “Drifter’s Escape”, as I found the soundquality of the vinyl version extremely muddy (a characteristic of the album itself).  Instead I used the original CD version taken from the Japanese pressing of the album in 1989, which was possibly remixed.  The sonics of that version more closely matched that of the pristine rips of the rest of the songs, making my construction sound more unified.

The first clues to reconstructing First Rays of The New Rising Sun are a handwritten list of 24 song contenders for the album (included with this torrent for reference).  Next is a handwritten tracklist on the back of a 3M tapebox (also included in this torrent) which maps out the tentative track orders for the first three sides of the album.  While Side C was obviously uncertain and in a state of flux, Sides A and B seemed to be finalized.  Jimi had already decided on the running order of the first disc himself!  Our job is already half done!

A closer look at Jimi’s tracklist for disc one should tell us a lot about what disc two would have been like: both sides start and end with an uptempo rocker (“Dolly Dagger” and “Ezy Ryder”).  Both sides also close with an uptempo rocker (“Freedom” and “Straight Ahead”) Also, there is one of the more idiosyncratic songs in the middle (the bluesy, stripped down “Belly Button Window” and the atmospheric ballad “Drifting”).  The second track on each side was also an uptempo groove-rocker, but could be characterized as slightly more experimental in design, as sort of continuing the energy level of the openers, but allowing room for the side to grow (“Night Bird Flying” on Side A and “Astro Man” on Side B).  Many frown upon “Belly Button Window”’s early placement on Hendrix’s sequence, but I feel it’s an interesting diversion from the pace of the album, a function “Drifting” also utilizes and a pattern I’ll repeat on Sides C and D.

It has been much debated about the length of Side B—was it supposed to be only 4 songs, running about 16 minutes?  Isn’t that a little short?  I am under the belief that it is NOT too short, that this is what Hendrix intended.  When listening to Side B, one still gets the impression of the complete side of an album, with “Straight Ahead” giving closure to disc 1.  Also a short, 16-minute side was not uncommon at the time, and the total length of disc one is thus approximately 35 minutes.  In summary, disc 1 was very straight forward in design, and one can postulate disc 2’s construction based on these parameters, creating a second 9-song, 35-minute disc.

The second step is to narrow down the list of contenders for disc 2.  The remaining tracks that are available that Hendrix was perfecting the summer of his death (and are in a some-what commercially releasable status) are: Angel, Beginnings, Bleeding Heart, Cherokee Mist, Come Down Hard On Me, Drifter’s Escape, Earth Blues, Hey Baby, In From The Storm, Izabella, Lover Man, Midnight Lightning, Stepping Stone and Valleys of Neptune (note that My Friends is excluded because it was never a contender for the album, not even recorded during the First Rays sessions).  Of those 14, we would only need 9 to match the first disc, and it is quite easy to narrow the list down.  When listening to the first disc, one can easily hear the unified musical direction Hendrix was aiming for, and it is obvious which of these 13 tracks would easily fit in based on the funky musical elements rather than a blues-based element (including percussive overdubs, backing vocals and psychedelic mixing characteristics).  When examining the sonic design, these tracks match disc one and are also the most “complete” songs of an album that was never completed anyways: Angel, Bleeding Heart, Drifter’s Escape, Earth Blues, In From The Storm, Izabella and Stepping Stone.  These seven should be fitted onto disc 2, leaving two more to choose from the remaining bluesy “skeletal” batch of songs.

Choosing two from the remaining seven “skeletal” songs was for me an easy choice, but admittedly comes down to personal preference.  One could not have First Rays of The New Rising Sun without its title track, so “Hey Baby” is chosen.  Of the remaining six (Beginnings, Cherokee Mist, Come Down Hard On Me, Lover Man, Midnight Lightning and Valleys of Neptune), Beginnings seems to be the most refined and release-ready and musically equivalent to the other 17.  Perhaps more than coincidentally, both songs were among the original 1971-released songs.  When added up, these 9 songs approximate 35 minutes—remarkably matching disc one!  All that is left is to determine the track order.

When constructing Side C, we must examine Hendrix’s notes.  This third side did not seem finalized, as half the songs were crossed out, and two of them were too skeletal and did not even make my cut!  Furthermore, if you assembled a side matching Hendrix’s rough, scratched out list, the result is a side that is too long and musically ununified, much unlike the previous two sides.  Although, we do know that “Drifter’s Escape”, “Beginnings” and “Angel” will belong on this side so we reserve space on Side C for all three.  If we look at the remaining 6 songs, the best contender for an opener for the second disc would be the hard-rocker “Earth Blues”.  It is then followed by the ‘second-track’ experimental-groover, which is “Drifter’s Escape” (which Hendrix had slated also).  The only instrumental on the entire album, “Beginnings” is fitted into the middle of the Side C as a sort of middle-point interlude, a type of intermission if you will.  My mix hard-edits the intro into the end of “Drifter’s Escape”.  This is followed by the token ‘idiosyncratic’ song in the middle of a side (much like “Belly Button Window” and “Drifting”), the unearthly ballad “Angel”.  Although Hendrix had penciled in “Angel” to close Side C, I chose to follow the precedent of the first two sides and close the Side C with the uptempo rocker, “Izabella”.  This song had been a blemish with many First Ray historians, as it was difficult to find an appropriate place for the song.  But when crossfaded into the closing bass-run of “Angel”—descending to D major, the same key as “Izabella”--the choice is obvious.  We are left with a solid 18:45 five-song side, comparable to Hendrix’s Side A.

We have 4 songs remaining to occupy side D, making a perfect fit: “Stepping Stone” acts as the side-opening rocker, “Bleeding Heart” acts as the second-track experimental-groover; “Hey Baby” acts as the mid-side idiosyncratic track; and “In From The Storm” acts as the epic side-closer.   Just as Side B, we have a shorter 4-song side that totals exactly 17-minutes.  Not too shabby!  In the end we have a two-disc set, each with approximately 35-minutes worth of music.  The songs are unified and cohesive and flow together perfectly.  Lastly, I included an original watercolor by Jimi Hendrix himself for the cover art, the original version of what was later used on the Valleys of Neptune compilation.   I felt the original more appropriate with this collection.  Enjoy!